Few gemstones evoke the excitement of a precious fire opal. The flashy show of this gem makes each specimen unique, a fountain of mystery, enchantment and legend. Some say that opals convey foresight and good health. No wonder that it is the October birth stone. Pre-historically, the Aztecs are said to have decorated their most prized artworks and figurines with inlaid fire opal. Today precious opals produced from Mexican mines are sought after in the U.S.A., Canada, Europe and the Orient. When these radiant stones are enhanced by a gold mounting, the results are spectacular. Working with native material, Mexican jewelers create beautiful yet modestly priced treasures of opal jewelry. Indeed, the value of jewelry exported from Mexico in the first half of 1999 was estimated at just over 100 million dollars.

What is opal? Technically, this mineral is made of silica, the chemical name for silicon dioxide. Common forms of silica are ordinary glass and crystals of quartz. The opal mined today was formed many millions of years ago in volcanic rocks. Opals formed when silica, carried by water, deposited in voids left by gas bubbles and in rock fractures. The silica did not crystallize, but solidified from a gel to form microscopic spheres. Water was trapped in these spheres so light passing through the water is broken into the spectrum of colors seen in this precious gem. The effect is similar to light passing through water drops in the sky to form a rainbow. If you have an opal, you possess your own rainbow!

The play of fiery colors is the universal quality of opal. However, the body of the stone that displays these colors can be clear, white, reddish or dark (black opal). The clear variety is termed “crystal” or “jelly” opal while the darker stones may qualify as a “black opal”. Red silica without a play of colors is termed “vidrio rojo” or red glass that is only a close relative to the fully developed opal.

More desirable opals display a full range of the rainbow colors evenly distributed across the face of the stone. The experts prefer a bright, clear stone with sharp flashes of color. Black opals are considered to be the most valuable. Cracks or fractures in the stone can interfere with the play of colors and they may cause the stone to disintegrate. However, if you are buying opals, go with what is pleasing to you.

Opals are seen in a variety of finished forms. They may be presented with the fire opal enclosed in a portion of the host rock. Such an opal is termed “in matrix”. The opal-bearing rock may be artistically sculpted into figurines of animals, fish, etc., with the opal representing a portion of the subject. For example, a bird may be carved from the host rock with the opal forming the resplendent colors of a wing. Opal may be carved into free forms or shaped into a domed, non-faceted polished cut (cabochon). Cabochons are usually mounted in rings, pendants, necklaces and earrings. Opals are sold by the carat; the price per carat will vary with the seller’s evaluation of the beauty of the stone.

The most durable opal is a solid piece, free from fractures. Buyers should avoid “manufactured” pieces. These are actually made by gluing a thin piece of good quality opal to a base of other material to form a doublet. Triplets consist of a thin slice of opal sandwiched between a cap of clear quartz and a base. The most outrageous fakes are fragments of opal floating in a clear plastic cast into a cabochon shape. The manufactured opals are particularly susceptible to damage from improper care and exposure to water, soap or solvents that can attack the glue or plastic.

Opals should be treated with care; like most gems, they will shatter or crack if treated roughly. Opals should also be stored away from heat as high temperatures can drive out the contained water, and they should be rubbed with light oil to prevent moisture loss.

One of the best areas to view and buy opals is in the town of Magdalena, in the state of Jalisco, a one-hour drive north west of Guadalajara. Take the auto pista ( Cuota) to Tepic and leave at the Magdalena exit. Alternatively, use the old highway to Tepic, which is in good condition. Magdalena is just 20 minutes from the distilling town of Tequila so the area has more than one attraction.

If you stop for more than a few minutes at the Magdalena plaza you will attract opal vendors. The offering may be presented in a small water filled bottle containing rough and/or polished stones. Judging from the values in the stores around the plaza, the street vendors start with a high price, so bargaining is advised. The shops offer a variety: rough opal in matrix, unmounted stones and jewelry. As well as the shops on the plaza, the store Opalas de Magdalena, three or four blocks from the plaza, on the road to Tequila/Guadalajara, is worth visiting. Good shopping for your piece of Mexican Fire !!

Around the turn of the century, Sir Arthur Conan Doyle in one of his “Sherlock Holmes” novels, mentioned Opals in connection with bad luck. English Diamond Merchants, fearing the growth in popularity of Opals, used Doyle’s reference as a starting point to create many “Old Wives Tales”, or blatant lies, to denigrate this precious gem stone. 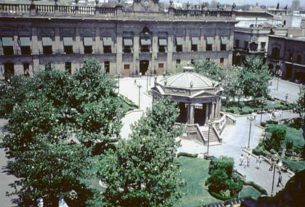