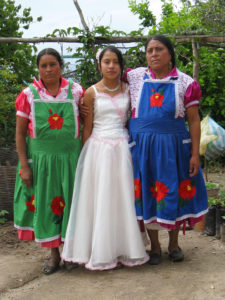 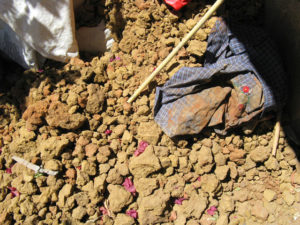 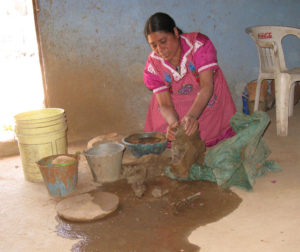 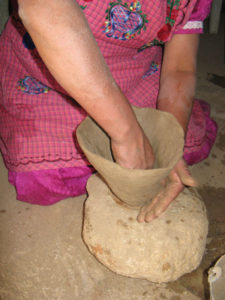 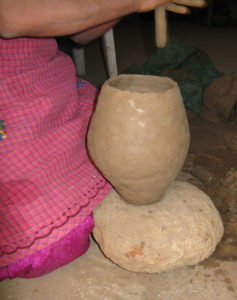 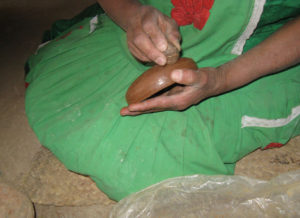 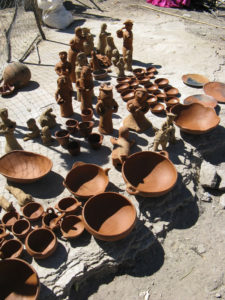 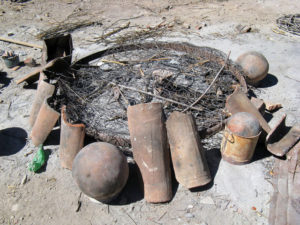 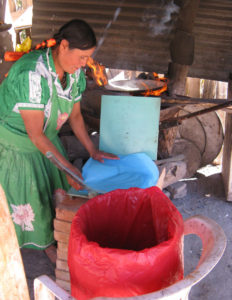 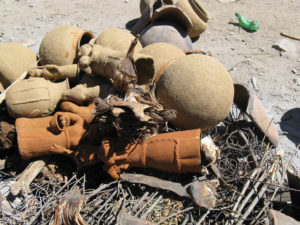 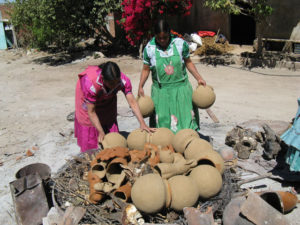 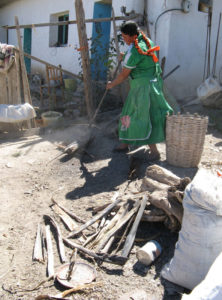 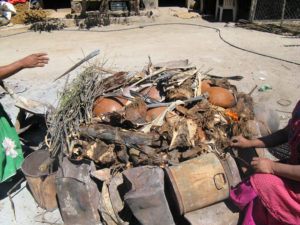 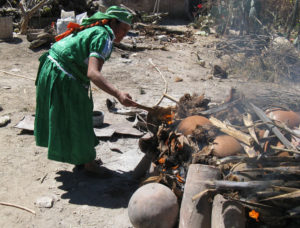 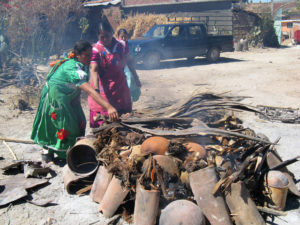 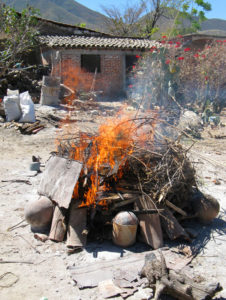 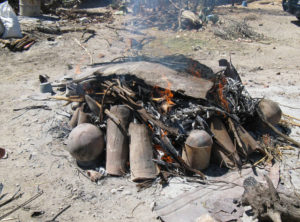 Every Sunday Gloria awakens at 3:00 a.m., and begins preparing tejate, a frothy, tasty corn and cacao based drink, which she will offer for sale in the Tlacolula market. A couple of hours later, her sister-in-law Maria and Maria’s daughter Luci follow suit, but in preparation for their own day of vending pre-Hispanic-style figures and masks, comales, and an assortment of other fired clay bowls, cups, plates and containers. Sundays, the women laugh, is their day of rest, when they don’t have to worry about scrounging for firewood, tending fields, lugging raw material for kneading into clay — the lifeblood of their economic existence — and in the case of Maria, looking after preparing breakfast for Luci and her older brother and getting them off to school.

The family of four lives in a modest yet fair sized dirt-floor compound in San Marcos Tlapazola, a Zapotec village about an hour outside of Oaxaca. Nearby Tlacolula is known by tourists and native Oaxacans alike for the pageantry of its Sunday marketplace, its bakeries’ wonderful chocolate-filled buns, the church, proximity to fields of agave and mescal factories, and products offered for sale by the women of San Marcos.

Gloria, Maria and Luci are 40, 38 and 12 years old respectively. While in the market, their traditional dress —consisting of brightly colored and embroidered taffeta dresses and headdresses — easily sets them and others from nearby villages apart from the rest. Luci confesses that she also likes wearing regular clothing.

In her lifetime, only once has Gloria been to Oaxaca. The mere thought of venturing into the big city intimidates her.

Clumps of hard earth are soaked. On a concrete floor in an almost barren dark room, Maria kneads the then softened mud with water and a bit of sand, while kneeling and working her magic, until a buttery smooth clay is ready to be fashioned into a vase. With her hands raised to just about head level, she molds a cone, pounds out the inside to create a funnel, then places it on a small hard piece of plastic atop a flat stone, with a bit of sand as a buffer. The sand enables her to spin the form into a sphere. She uses rolls of clay to build up it up. A piece of corn cob is used to make the outside surface even, and another piece of plastic to cast the inside. A small round segment of hardened gourd assists in producing the desired, final exterior shape. A strip of soft leather facilitates the creation of a smooth finish. Then it’s on to the next one.

Gloria is sitting a few feet away, beginning to burnish a small bowl she has removed from under a cloth covering several others. She’s using one of two almost golf ball sized highly polished river stones given to her by her grandmother. She has already coated the series of bowls with a mixture of a different, much redder clay, and water, so as to create a terra cotta colored paint tone. Once hard and dry, all that Gloria and Maria have produced over the course of days, is ready for firing.

Some alfareros (ceramic artisans) in the town of Atzompa use above-ground brick and cement ovens. Others in San Bartolo Coyotepec and Ocotlán use below-ground brick-lined pits. Manuel Reyes in Yanhuitlán constructed his own twin kilns out of clay brick, lengths of reinforced steel, and mud. But each and every time they want to bake their clay pieces, the women of San Marcos build a makeshift enclosure at ground level, made variously of discarded bed spring, pieces of rusted through wheelbarrow, a bent bicycle tire rim, old sections of otherwise unusable laminated metal, and broken pieces of pottery, which have not survived a prior firing.

A cousin sometimes comes by in a truck to sell Gloria and Maria a load of twigs, branches and rotted out logs, for anywhere between 400 and 1,200 pesos, depending on the load size. Sometimes he brings by dried agave leaves, stock, and pieces from the heart or piña which have for some reason not been harvested for mescal production. The women themselves often gather up similar pieces of potential fuel while in the course of walking the hills outside of their village, and tie them up to both sides of their mule before heading back home.

A day of baking pottery can usually proceed smoothly if there is no rain and any earlier precipitation has not left the wood wet, if it’s not too windy, and of course if there is a sufficient supply of burnable product on hand, and not too much of the scrap metal has been rendered unusable through the beginning stages of decomposition/disintegration.

Typically, Maria is in charge of process, while Luci assists, and Gloria divides her time between doing other household chores such as cooking tortillas and being called upon when Maria tires or has been affected by the intense heat, or a stage in production is time-sensitive.

All the pottery to be baked is assembled outside, in close proximity to the area where the “oven” will be built: a series of rustic clay pots — an order for a client who makes and sells piñatas; three clay griddles which were not sufficiently fired on a previous occasion, numerous clay figures of different sizes and forms for the Tlacolula tourist trade, and an assortment of functional pots, bowls and plates, as well as a few small spoons and tiny colanders.

A circular base approximately two meters in diameter is created, using preferably bed spring placed atop a couple of staggered layers of brick, since such a foundation provides for aeration. Broken pots, old metal receptacles, roofing tile, and whatever else is close at hand creates a confining perimeter. Small twigs and pieces of agave heart are placed underneath. Maria cuts agave leaves with a machete. With the aid of an extremely heavy, meter-and-a-half long crowbar known as a barreta, Gloria pitches in by splitting log pieces and lengths of dried agave stock. Maria and Luci build a flammable base atop the spring. With gingerly proficiency, Maria both directs and assists in placement of the pieces. From her years of experience she knows how to best achieve even firing and avoid breakage.

More of each class of burnable, as well as dried tumbleweed, is carefully placed on top of the clay pieces. Hot ash from making tortillas is shoveled into crevices to facilitate incineration, while a couple of matches set to a few special added twigs — a natural kindling — assures a quick light. A fairly strong wind fuels an initially fledgling fire, and within seconds, the blaze is raging and smoke is billowing. More branches and dried agave parts are tossed on with the upmost care, since multi-directional wind tunnels have been created. Gloria must fully cover her head to ensure that spark does not ignite her hair. Each takes a turn extricating herself from the swirling, seemingly out-of-control flames. Finally, sheets of rusted metal are strategically placed alongside, and atop, to control the entry of air being drawn to the inner portions of the enclosure.

The morning’s work completed, flames are left to dissipate, while Gloria, Maria and Luci sit, have a drink of fresh fruit juice, and rest. After about 45 minutes, firing will have been completed. The area will be left to cool, while Gloria and Maria return to their simple work room, add a bit of water to their drying clay, and begin kneading it before once again beginning production of another diverse lot. Later in the day, the oven will be disassembled, pottery removed with hopefully a minimal amount of breakage, ash dusted off. The women of San Marcos Tlapazola will then wrap and box their merchandise in preparation for their next trip to market.

Most Sundays, Maria can be found sitting on the ground with Luci, with an array of rustic clay figures and masks, as well as a selection of traditional Zapotec cooking and serving utensils displayed in front of them, on one side of an outside aisle in the Tlacolula marketplace. Gloria will be directly across from them, pouring cups of tejate for thirsty passersby.

Alvin Starkman has a Masters in anthropology and a law degree. Now a resident of Oaxaca, Alvin writes, tours travelers to the sights — including excursions to visit San Marcos Tlapazola — and owns Casa Machaya Oaxaca Bed & Breakfast, a unique Oaxaca bed and breakfast experience providing Oaxaca accommodations which combine the comfort and service of Oaxaca hotels with the personal touch of quaint country inn style lodging. 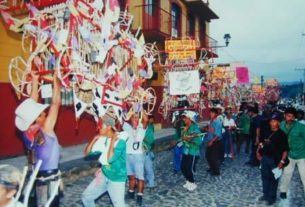 Xico: A village of enchantment in Veracruz