Photo Gallery: Fiona Dunnett: images of self and death in Oaxaca 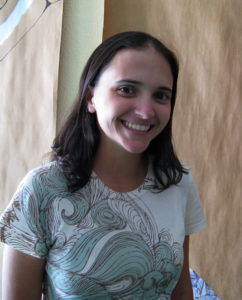 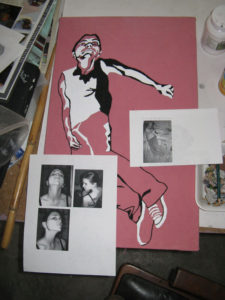 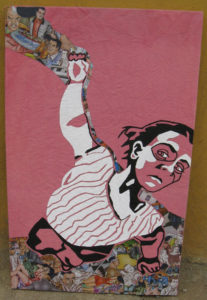 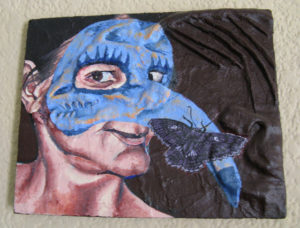 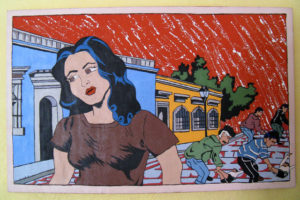 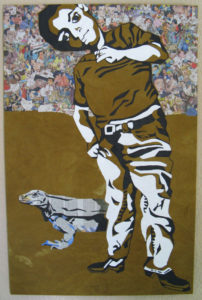 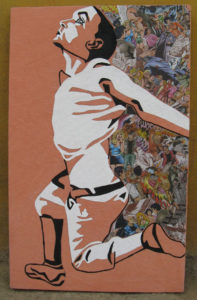 Comic strips, a young Canadian’s self portraits, and photographs of violent deaths in a Mexican daily newspaper, make strange bedfellows. But they constitute a major part of the driving force for the creative energies of artist Fiona Dunnett, a resident of Oaxaca, Mexico.

Ottawa-born Dunnett has been living in Oaxaca since 2005. As in the case of so many artists who now reside in this city in southern Mexico, her arrival has been rather circuitous. And like so many others, her artistic talent has been influenced at virtually every stop along the way. At age five she left Canada for Bangladesh with her Canadian diplomat mother and the rest of her family. After three years it was back to Ottawa, and then a further three years in Zimbabwe.

“When I left Zimbabwe I felt close to South Africa. I took a course in stone sculpture while there, so yes, I suppose living in Zimbabwe has had somewhat of an influence on what I do today,” she surmises. But it was her upper level academic training, first at the Canterbury School of Arts, followed by British Columbia’s University of Victoria from which she graduated with an Hons. B.A. in Fine Arts, which exposed her to the personages who have impacted her creativity the most.

Roy Fox Lichtenstein [1923 – 1997] was a prominent American pop artist, whose work was heavily influenced by both popular advertising and the comic book style. The latter clearly shines through in Dunnett’s more recent works, and in an earlier piece which graces a wall in her home in Oaxaca’s Xochimilco neighborhood which she shares with her boyfriend and three others. “That one’s based on a dream I had, certainly with overt comic book imagery; in the particular dream there was a calenda (parade), with bodies being dragged through the streets. I once did a series based on my dreams. I dyed the red sky forming part of the background of this canvas with cochineal [the minute insect with naturally produces carminic acid, and was an important export industry for Oaxaca during colonial times].”

Dunnett is much too modest. Since moving to Oaxaca, there’s no doubt that she’s put her own mark on the comic style, with her un-daunting desire to learn, and innovate. The geographical, cultural and political environment in which she lives provides her with diverse opportunities for artistic inspiration. She attended a workshop to learn about the use of natural dyes such as those derived from flowers, plants and of course cochineal, at the educational and research facility known as Centro de Difusión de la Grana Cochinilla Tlapanochestli. “For quite some time I’d been thinking about using natural dyes in my work, but it wasn’t until a couple of years ago that I realized that here in Oaxaca [actually a few kilometers out of the city, in Santa María Coyotepec] I had the opportunity to learn about their use from an expert, Manuel Loera Fernández, the chemist at Tlapanochestli. There’s just so much artistic stimulation in Oaxaca that it’s hard to resist taking advantage of everything available.”

Dunnett has also participated in more traditional hands-on seminars, at the well-known Graphic Arts Institute of Oaxaca (IAGO) and at a couple of other institutes in the city. Towards the other end of the spectrum, she credits two local graffiti stencil art groups with providing her with additional inspiration, which becomes apparent after an examination of her work.

“I began moving out of realism and into stylized, surreal works towards the end of my Canadian academic training. It was about the same time that I began working with mixed media, my strong preference at this stage of my development.” Coming to Oaxaca was perhaps the catalyst she required in order to begin more experimental work, within the context of an extremely encouraging environment.

Aside from a leaning towards the use of natural colors for backgrounds on her canvasses, one of the major identifying features of Dunnett’s work is her use of collage — cut-outs from newspapers, magazines and comic books. Another is using photographs of her own head and face to provide the stimulus for her portrayal of expressions and poses she seeks to capture for each subject. Almost every head in every work is based on a self-photographic portrait.

“I started doing self-portraits when I began doing photography several years ago. Then when I moved into painting, I had this corpus of self-photos, so I was able to draw from them for my art. Although I wanted to shoot other people, I never felt at ease doing so. And though my boyfriend and I have been together for close to four years, I still don’t feel comfortable photographing even him. So it’s all me, perhaps because of being shy when it comes to shooting others. But that red one over there, textured with corn husks from tamales, it’s an experiment, using a face that’s not my own — I think it’s best if I stick to my own face.”

Each face evokes different emotions, and images of self. “The faces make eye contact; viewers’ eyes move around each work and then return to the eyes and face,” she explains. It’s undeniable that Dunnett’s own pleasing facial features, and her comport, once transferred to canvas, play a significant role in directing the viewer. She has masterfully photographed her head and upper body at every angle and with a plethora of facial expressions for use in her work.

But there’s another reason we return to the images of Dunnett’s facial expressions: The torso and limbs of each primary subject portrayed is far too troubling — each is a digitalized version of a photograph of a person who has died a violent death, usually in a traffic collision or as a consequence of domestic conflict, captured by Dunnett from both print and online versions of a Oaxacan daily, Noticias Voz e Imagen de Oaxaca. But in the artist herself, there is a sense of calm.

“I started using those photographs because they just began to jump out at me. You never see anything like it in Canada. In Oaxaca, it’s on the street corners and in the newsstands. Death here seems to be an everyday thing, and attitudes towards death are so different than from where you and I come from, not so hidden away.”

Dunnett stresses that her intention is not to invoke feelings of horror, nor reveal the gruesome. The facial expressions she initially captures with a lens, then transposes onto canvas with brush, lead us away. In the case of her work with a collaged iguana, it’s curiosity in her face, rather than demonic imagery of death, which draws one in.

The juxtaposition of death against the aesthetics of comic imagery is striking, almost as much as the multiplicity of presentations of Dunnett’s own self. It’s that combination which maintains the viewer’s awe of and transfixation upon her work. Perhaps Fiona Dunnett never should break out of her reticence about photographing the faces of others. 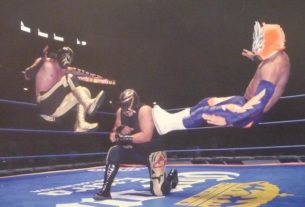 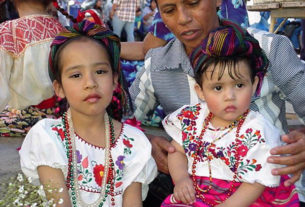