The usually bustling Mexican markets become even more so in December, when the mountains of fruit for ponche navideño (Christmas punch) compete with a wild array of tinsel-y decorations for shoppers’ attention, and the excitement leading to the posadas and pastorelas builds up. The culmination of all this preparation is, of course, Noche Buena — Christmas Eve — when one of the most festive dinners of the year is served. A Mexican Christmas dinner is abundant and varied, with foods that range from tamales to turkey and tejocote.

For nine days before Christmas, friends and neighbors get together for posadas — reenactments of Mary and Joseph’s search for shelter in Bethlehem. They always end up at the home of whatever neighbor lets them in, whereupon piñatas are broken, fruit and candy are devoured by the children, and Mexican punch, tamales and fritters called buñuelos are enjoyed by all. The punch, flavored with seasonal fruits like tejocote (hawthorn fruit) inevitably shows up at the Noche Buena dinner as well, along with the eggnog-like rompope and a variety of other seasonal specialties.

The dishes served at this meal vary from region to region: mole and romeritos in the central regions, tamales in the north, pozole in the western part of the country, and chocolate with churros and buñuelos in the south. But most often in modern day Mexico, a turkey is the main attraction, no matter what regional dishes accompany it. Stuffed with either ground meat, olives and raisins, or with a chestnut dressing, the Christmas turkey is a European preparation of a New World bird, far different in culinary character from the turkey served in the dark, rich wedding moles.

The bacalao, or dried, reconstituted codfish traditionally served as a first course, is also European in origin and can be either exquisitely well prepared or terribly salty, depending upon the cook. The best ones we’ve had in Cholula were reflections of the Spanish influence on Mexican cooking, soaked to remove all traces of the salt in which they were cured, and flavored with olives, tomatoes and chiles. 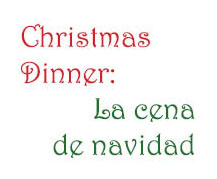 The ensalada de Noche Buena — Christmas Eve salad — is a baroque but attractive combination of beets, lettuce and seasonal fruit, open to interpretation, depending on the availability of ingredients and the whims of the cook. It most often varies according to region, with more tropical variations found in the warm coastal areas.

In Cholula, many families opt to attend the Misa de Gallo, the Christmas Eve Midnight Mass, and do not begin feasting until afterward. While the young people playing Mary and Joseph ride into the convent on a burro, and a Baby Jesus figure is placed in the crèche, the family cook, most often Mom, is home basting the bird and cutting up the countless salad ingredients. Whenever we were invited to one of these all-night eat-a-thons, I would volunteer to help with the dinner, drinking enough café de olla to get me through until people finally crawled off to bed.

It is not unusual for Christmas dinner to last until four in the morning, and this is why Christmas Day itself is a quiet non-event in most Mexican towns. Like New Year’s, Independence Day and saints’ days, it is celebrated on the eve of the calendar date, which makes a certain amount of sense, given that the holiday actually does start at midnight.

No matter when these dishes are served, they are well worth incorporating into your own celebrations. Pick one, two or more and add a tasty Mexican touch to holiday meals. A wide selection of Mexican Christmas cookie and candy recipes can be found in Mexican holiday sweets: Cookies, candy and more and regional holiday turkey recipes in Pavo, guajolote, totole: The bird is the word.