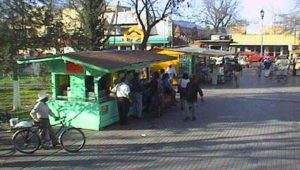 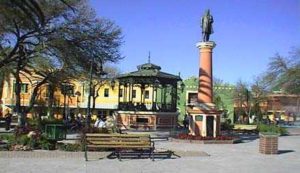 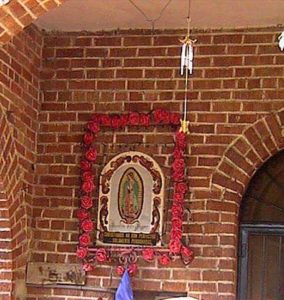 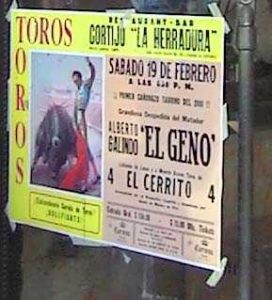 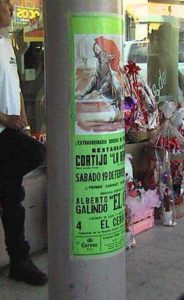 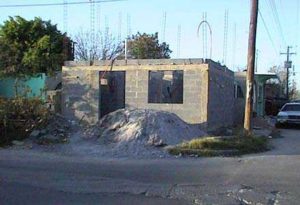 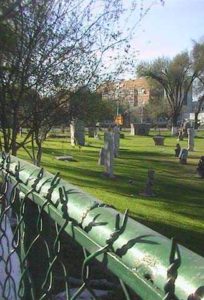 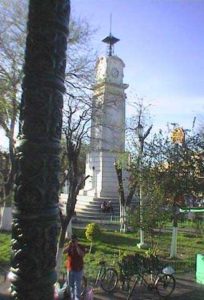 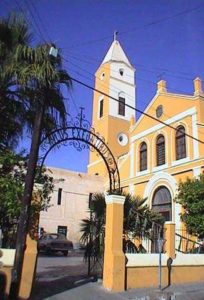 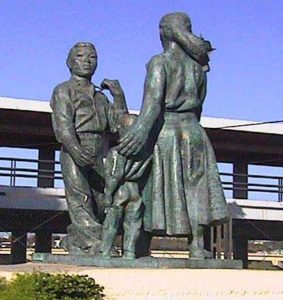 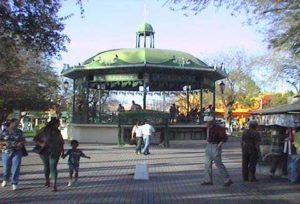 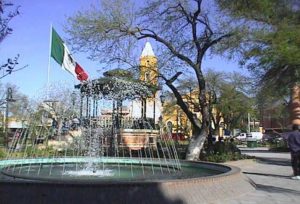 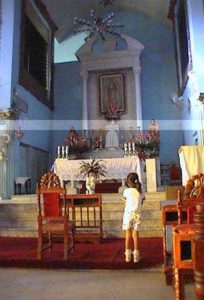 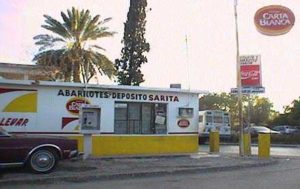 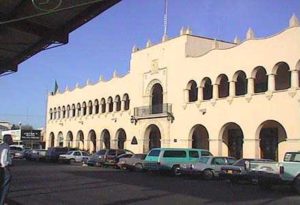 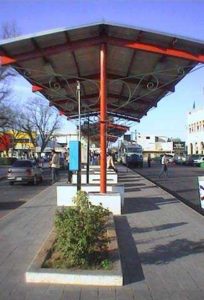 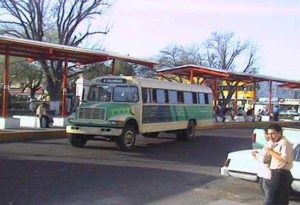 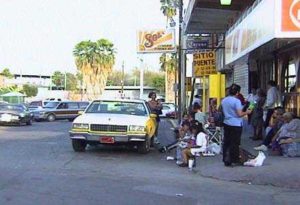 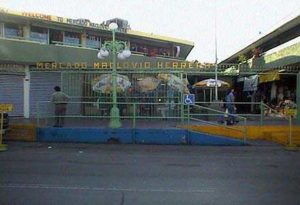 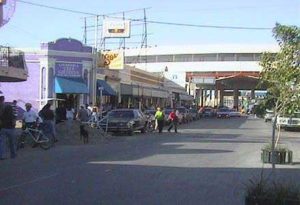 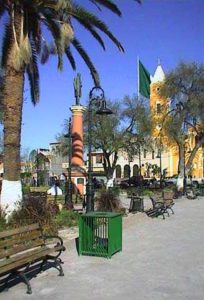 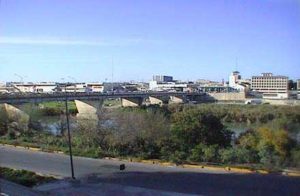 Regardless whether you translate la frontera as “border” or “frontier,” the images evoked are often negative: lawlessness, dusty streets, harsh climes, and a general disregard for human life. Even in an historical context, frontier life means living on the edges of civilization.

When outsiders first encounter a Texas-Mexico border town, such images are often brutally reinforced. The in-your- face aspects of the culture are hard to ignore–young children selling chicles [chewing gum], aggressive street vendadores (“Hey, lady! this chain, very cheap!”) and scrufty panhandlers of all types can be annoying, intimidating and downright overwhelming. Although I’m not a blonde, I’m fair-skinned enough to stand out in this crowd, and I admit that sometimes I feel like a walking dollar sign.

So I understand that all too often when visitors take an afternoon trip across the border into Mexico, they experience only negative aspects of the city and, unfortunately, they return home thinking that they’ve “been to Mexico.” It’s no wonder that many folks come away thinking that living in a border town is fraught with poverty and danger. Some are so turned-off, they vow never to return! My intention with this article (and those to follow), is to encourage you to set aside whatever images you have about border towns, and to tempt you into actually visiting Nuevo Laredo, just south and across the Rio Grande/Rio Bravo river from Laredo, Texas. The two cities are known as los dos Laredos.

If the following reasons aren’t enticing enough to get you to visit for longer than an afternoon, then I hope my articles will at least challenge your mind-set about what US-Mexico border towns (and la frontera in general) are all about. Whether you’re toying with a weekend trip across the border or just passing through, here are four good reasons to target Nuevo Laredo as your destination or crossing-point.

1) Border towns are easy to visit.

If you’re planning to visit for less than 72 hours, there is no need to get an FMT (tourist permit). Should you choose to drive across, unless you plan on going beyond the 24-kilometer checkpoint, you won’t need to obtain a vehicle permit. However, I still recommend insurance, if your policy doesn’t cover the frontier. Better yet, to make it even easier on yourself (and depending on your driving skills, possibly safer) come across by foot! Nuevo Laredo is especially pedestrian-friendly. International Bridge I takes you from downtown Laredo, over the river, right into the central business district. This district, El Centro, extends south along Avenida Guerrero for quite a distance, although the heart of the tourist area consists of the first eight or so blocks immediately south of the Bridge. The primary tourist market, Mercado Maclovio Herrera, is about three blocks from Bridge I, on the west side of the Avenida.

If you’re planning on traveling farther than you’d care to walk–there is good shopping and eating to be found farther down Avenida Guerrero–you can take a taxi. The initial taxi stand (” Sitio Puente“) is directly across the street from the end of the Bridge. However, taxis can be hailed almost anywhere in the tourist district. Curious about the absence of the compact, green and white ” ecotaxis,” I was told by a taxi driver that American tourists prefer the more traditional taxi, a large car with 4 doors. The taxis do not have meters, but charge standard rates for certain destinations; best to discuss the fare before getting in the taxi. As with the tourist zone shops, the taxis will gladly accept either pesos or dollars.

For the adventuresome, there are the city buses. I recommend this mode of travel if you want to get the feel of the real Nuevo Laredo. Buses for continuing your trek south on Guerrero can be caught at the bus stop in front of the “old” Palacio Municipal, on the east side of the second plaza–about 5 blocks south of Bridge I on the east side on Guerrero. Most of the municipal buses are recycled school buses. And I should probably add, “roughly” recycled. Bus fare is 4 pesos, regardless of where you’re headed. Any luggage you have you usually keep close to you–on the seat or at your feet. Buses start running about 6:30 a.m. and run until about 9:30 p.m. They’re not on as strict a timetable as in the States, but come approximately every 20 minutes or so. However, for special events, the buses usually run later into the evening.

And as for exchanging money, most merchants are quite happy to be paid in dollars (though there is no scarcity of casas de cambio/currency exhanges). The casas de cambio closer to the Bridge tend to give a slightly higher exchange rate–about .05 centavos higher per dollar.

2) Border towns are about as dangerous (and as safe) as visiting any other medium to large urban area.

In most US cities I’m familiar with (Denver, San Francisco, Houston, San Antonio), the problems faced by visitors are not that different than what you face when traveling to a border town. There are good and bad people everywhere, and there are better and worse neighborhoods everywhere. Not speaking any Spanish (even turista Spanish) can put you at a slight disadvantage–but most border towns are used to tourists. It’s to the advantage of the merchants to be able to speak at least a little English, so many do. If you are usually hesitant to explore areas away from the main tourist zone, do some research before your trip (and learn a little turista Spanish!). Don’t expect to find much useful information in the published tour guides. In my opinion, most of the ones I’ve examined do a pretty sad job of reporting about border towns–in part, because of the bad reputation of la frontera. Check out the Web! [See the end of this article for some URLs on Laredo/Nuevo Laredo.] Talk to people who’ve been there. In Nuevo Laredo (and probably in the other border towns), there are many interesting places to visit outside of the tourist sector which won’t put you on the “wrong side of the tracks.” I’ll be covering some of the “off the beaten path” sites of Nuevo Laredo in future articles.

3) Border towns can be an inexpensive way to visit Mexico.

By not having to get an FMT you save $15.00! Not to mention posting of bond for your vehicle and the cost of the vehicle permit (another $12)! Crossing by foot costs you less than a dollar! The pedestrian bridge toll costs 35 cents to leave the US and the Mexicans charge 2 pesos or 25 cents for the return trip. Although prices may be a little higher in the main tourist district than in other parts of town, most items are generally less than they would be for the same item if purchased in the US. Surprisingly, even the local supermercados [supermarkets]–Soriana and Gigante–carry barro dishes (the popular brown pottery) and some Mexican glassware. And if you’re planning to travel to points within Mexico, oftentimes it is less expensive to get to the US border town, cross the border, and then use Mexican transportation departing from that particular town.

4) Mexican culture–and then some!

La frontera is truly unique! Not only culture clash, but (at least in the case of los dos Laredos) a fascinating mix (more like a mish-mash) of Mexican and US cultures. I like to describe this region as ” Lo mejor y lo peor del ambos mundos“–“the best and worst of both worlds.” Many people believe Mexican border towns have lost their culture–that they’ve become too “Americanized.” The influence of the United States is undeniable, especially when one sees 7- Elevens, McDonalds, Pizza Hut, Office Max and the like. True, some customs seem to have all but disappeared–for example, the siesta. (Believe me, having lived through two summers in the Laredos, this is one custom I would like to see resurrected!)

But if one looks beyond the tourist-oriented aspect of border towns and focuses on the gente [people], it is obvious many aspects of Mexican culture are flourishing. Among my personal favorites are the ubiquitous tiendas for abarrotes (“mom and pop” stores for groceries) and depositos that sell mainly beer and soda pop, but usually include some food items). You’ll find these on nearly every block. Likewise, the cries of the traveling street vendadores–selling everything from El Manana, the daily newspaper, to donuts, or dirt for your plants ( “¡¡¡tieeeeerrrrrrra!!!”) are a part of the daily sound-scape. Get up early and go to missa [Mass] at one of the Catholic churches; take a walk through a panteon [cemetery] and note the differences in how we honor our deceased; spend an afternoon (especially a Sunday afternoon!) sitting in a plaza, people-watching. Notice public artworks, architecture (both the interesting and the mundane–more cinderblock!), visit historical sites, check out the public library–there are four in Nuevo Laredo!, and give a shot at figuring out what that banner draped across the Civic Hospital is trying to promote. All of these activities will give you an inkling of the differences (and similarities) between Mexican and US culture. And for many of these activities, you don’t need to know any Spanish!

Depending on the time of year you visit, there are festivities which offer visitors opportunities to see aspects of Mexican culture which are apart from the day-to-day routine. For instance, the plaza del toros in Nuevo Laredo features bull fights. Or, for professional wrestling, check out luche libre at the 4-Caminos Arena. The Laredos have a bi-national baseball team, the Tecolotes. Of course there are soccer games, from primary school to professional.

EXPOMEX, in September, reminds me of a state fair with livestock and other exhibits, booths of artesans selling their crafts, cockfights, a rodeo, performances by nationally known entertainers, a midway, and lots of food (much of it from the different regions within Mexico).

In December, there is a major celebration for Nuestra Señora de Guadalupe, which opens with a peregrinacion [a parade-like pilgrimage] to the Church of Our Lady of Guadalupe and continues about a week with nightly activities including dancing by the numerous groups of matachines.

Every border town will have some celebrations unique to the immediate area, but also will celebrate national holidays, such as El Dia de la Independencia, September 15. Mexico is an extremely diverse country. In my opinion, much like the US, Mexican culture is really made up of a number of cultures–some indigenous (more so in the south), some imposed, adapted, or adopted from without. And much mixed! You don’t have to spend a lot of money or time or travel huge distances to be able to savor a bit of the culture of Mexico. It’s as close as the nearest border town!

Warm Reading For Cool Nights: A Guide To Mexican Chiles