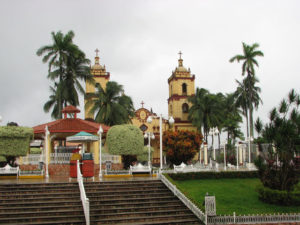 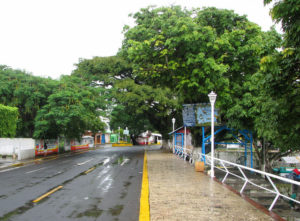 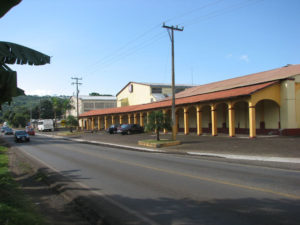 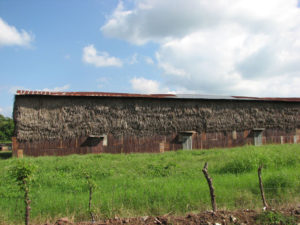 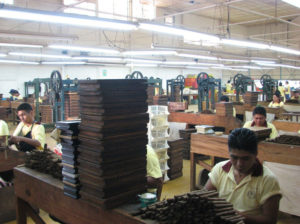 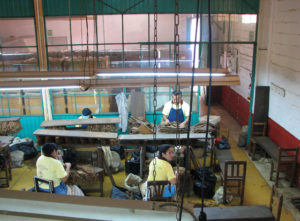 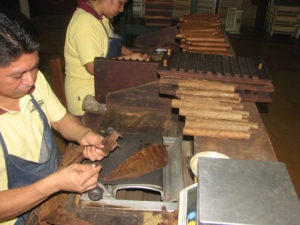 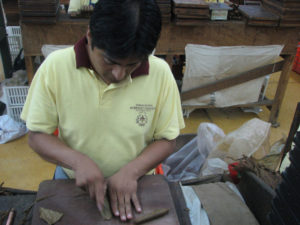 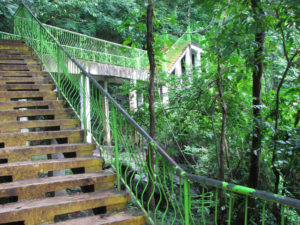 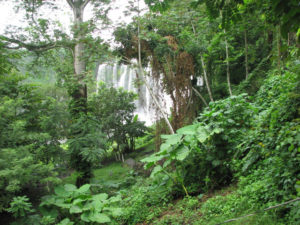 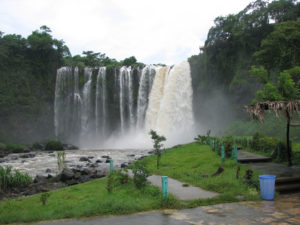 Driving to Yucatan, I made a wrong turn and wound up in the town of Catemaco. A shady beach drive along a huge lake provided a tranquil setting reminiscent of Hollywood’s 1930s America. I pulled to the curb to enjoy a walk and a cigar. The setting totally captivated me.

The delight I discovered from my error increased when I learned Señor Turrent — the largest cigar maker in Mexico, producing five million cigars a year — resided on the lake. Townspeople said his production facility sat only a few kilometers away in the village of Sihuapan.

I was torn between enjoying the daily life of the little town and viewing the tourist sites or visiting the cigar factory. Heck, I’d just stay a few days longer and do both. Finding a location in Mexico isn’t always easy for an American. Luckily the señorita manning the Hotel Los Arcos reception desk provided excellent directions. She suggested after I visited the factory I should see the nearby waterfall.

With Señorita Diana’s guidance, I easily reached the factory. Although the buildings abutted Highway 180, I would have driven straight past. Mexicans tend to place their signs directly against a building while American eyes are more apt to see signs perpendicular to a wall. My watch read ten in the morning as I reached the gate for factory tours. In a few minutes the guide, Gustavo, patiently walked me through the rolling process.

A tour of Tabacalera Alberto

Lighting my Churchill — denotes a cigar size — under the factory’s delightful front awning, I reflected on the tour. The plant was spotless. Workers hardly noticed my camera as they produced hand-rolled cigars for the world’s enjoyment. The finishing man was a study in concentration. He worked with a strange, fat moon-shaped blade — known as a chaveta — as he crafted the final touches to each cigar. Oblivious of my clicking away, he cut and fit. My high-speed camera failed to catch his hands, except as a blur.

Impressed, I wanted to know more about the man behind the cigars and the production process. I returned to the hotel and asked the owner if he knew Señor Turrent. Why, yes. Let me look up his number. You can call him.

I had no intention of phoning Señor Turrent out of the blue, but his obvious accessibility to fellow townsmen supported what I was already thinking. His workers stayed busy, and an easiness and pleasantness enveloped the factory. He appeared to be far more than a behind-the-scenes CEO. I decided to return to the factory to see if anyone spoke English.

I was quickly rewarded with an introduction to the Exports Manager, Señorita Marilu Zetina. Even in their busy season, with true Mexican hospitality, she said if I returned at four-thirty, she’d make time for an interview. I welcomed the intermission. I could enjoy a couple more cigars and prepare for our meeting.

Mexico is the original home of tobacco

We sat at a table in the little sales office with salesgirls and secretaries stirring in the background. Señorita Zetina spoke fluent English, punctuated with a wonderfully exotic accent and a quick smile. “Given the one hundred twenty-seven-year history of Turrent Tobacco, what is the current structure of the company,” I asked?

“We are actually four companies in one,” she said. “Tabacalera Alberto is the commercial name and Turrent, Nueva Matacapan Tabacos, SA de CV is the legal name. Many people refer to us as Te-Amo. Señor Alberto Turrent is the President, and Señor Alejandro Turrent is the Vice-President. We have sales managers, accounting controllers and human resource people, among others. For special events or needs, we hire temporary staff to help. We grow the tobacco, cure and roll our cigars in this area.”

My Spanish is only functional and I thought how great it was to avoid using a translator. I said, “On the surface, it appears Mexican tobacco sales to the United States have declined in recent years. I understand there is an organization promoting Mexican tobacco.”

Marilu thought about the question a few seconds. “About ten years ago, the six largest cigar manufacturers formed the Association of Cigar Manufactures to promote Mexican sales. Mr. Alejandro Turrent presides as President. The web address is: www.mexicocigars.com. A few small companies are not members. The association buys larger spaces at shows. We’ve experienced a year by year growth and expansion to other countries. The organization also lets people know Mexico, not Cuba, is the original home of tobacco. The Mayans smoked tobacco, and archeologists have found many pipes among their artifacts.”

My ears perked up. I’d often thought of flying to Cuba from Mexico to see if the country was truly as bad as its reputation. “Does the once great Cuban-Mexican cigar rivalry still exist?”

“As you know, we never broke relations with Cuba, so there is no real rivalry. In fact, the Cubans recently had problems drying their leaves. Here, we braid our leaves and hang them up for drying. The Cubans asked Mr. Turrent for help. He sent a man to teach them the Mexican method of braiding leaf. We recently hosted a delegation from Slovakia who had visited Cuba first. We were a little concerned over the comparisons, but they found our tobacco and facilities far superior.”

Señorita Zetina had a great deal of pride in her company, but the question made her straighten with emotion. “The flavor. Negro San Andres is our region’s particular tobacco. It is good for the binder, filler and wrapper. Few tobaccos serve all purposes, and Negro San Andres is needed by many other tobacco companies for at least one part of the process. General Cigar, Padron, Don Alvero of the Canary Islands and Monte Cristo Dominican are some. We send tobacco to almost thirty countries. Our tobacco possesses a unique flavor and other characteristics that make Negro San Andres the best in the world.”

We’d been deep in conversation and I suddenly noticed the secretaries standing in awe a few feet away. They stood obviously amazed at the ease with which their co-worker held a conversation in English. They smiled in mild embarrassment at being caught eavesdropping — even on a conversation they couldn’t understand. I said in Spanish and with a bit of truth, “She speaks English better than I,” and their smiles broadened.

The little break with the secretaries turned my mind back to the production plant. “How many workers do you have?”

“We have 255 employees here. Fifty are strictly involved in hand-rolling the cigars.”

“What are the basic types of tobacco grown?” I asked.

For an employee with less than five years on the job, Señorita Zetina had soaked up a fortune in tobacco and cigar knowledge. “Sumatra, Habano and Criollo are grown in this region.”

I paused a moment, hoping my next question wouldn’t raise any uncomfortable feelings. “Are there any trade difficulties with the U.S.?”

The quick response indicated I remained on safe ground. “How did NAFTA impact Nueva Matacapan Tabacos?”

“It was good. NAFTA helped exports by reducing import taxes. The USA now buys about seventy-five percent of all our cigar production. Spain, Poland and Ukraine follow the US in purchasing our cigars.”

I was uneasy with my next thought, but just asked. “Mexican cigars have lost considerable market share in the US over the past decade. Speaking with you, it appears Turrent is holding its own concerning production, if not percentage. Would you know why Mexican cigars are losing their former high percentage of the US market?”

Marilu twisted in her chair and thought a few seconds. “Turrent has been in the American market since 1964. Around 1996-1999, there was a boom in cigar sales. One thousand people worked in this factory during that era. I believe sales on cigars have leveled out since then, although sales to Europe are increasing.”

This waterfall appears in Mel Gibson’s “Apocalypto”
© William B. Kaliher, 2010

One of the secretaries interrupted us. Marilu was needed in the factory. Still, I’d learned a lot and made arrangements to see her several more times over the next week as I explored Tabacalera Alberto and met other employees. Leaving, I wondered what to do with myself. Then I recalled Diana telling me if I took the road directly across from the factory, I’d reach a wonderful waterfall.

Waterfall in the Mist

With a pocketful of fresh cigars, I took the little road, thinking it couldn’t be much of a waterfall. Not a single sign indicated a waterfall until I was on the road itself. A few miles later, I dead-ended at a large empty parking area with a dozen small restaurants serving no one. I watched as the employees in every restaurant huddled near the windows to stare at me. Several teen-aged boys approached. “Do you need a guide? I work for tips” was the universal mantra.

I didn’t need a guide, but picked one of the boys anyway. Two hundred forty-two steps led down a cement stairway and through tropical rain forest for the perfect view of the falls. The raw power and glory of the broad unadvertised falls made the perfect distraction.

I enjoyed an A. Turrent Tradicional in the jungle setting, feeling the smoke and the mist from the falls 150 yards distant swirl over me. Realizing I was getting a bit too wet, I retreated into a dozen wooden campsite-style restaurants along the river flowing from the falls. I wanted a Coke but not a single eatery was open. Still, it was a perfect locale to finish the cigar and reflect on my conversation with Marilu. When I returned to factory, she’d introduce me to Mr. Turrent to learn more about the farming aspect of the operation.

It had been a wonderful day.

I glanced at the stairs. I suspected if I could climb all two hundred and forty-two of them, it would be a great night too. At the top, I entered one of the idle restaurants for the cold drink. The smiling waiter and shy waitress watching from near the kitchen quickly enlightened me concerning the closed restaurants on the river and the empty restaurants around the parking lot. Virtually all the business done in the area was on Saturday night and all day Sunday starting at dawn. Families from all through the Los Tuxtlas region converged on the falls every weekend for a festive, picnic-type day. I thanked the youths serving me and filed the information away. I hoped perhaps one Sunday morning, I’d be able to join the throngs flooding this special waterfall seen in Mel Gibson’s Apocalypto. 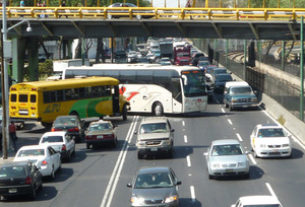