Living here in Mexico offers me so many opportunities to be thankful. How did I ever fit a career into my life? My days are filled with friends, with travels, with bridge, with doll making and writing books… and, recently, installing my new computer, learning new software programs and figuring out how to save important files from my old computer.

A couple weeks ago, a friend of mine, Marilyn Davis, who wrote Mexican Voices. American Dreams took me to see Tonala from the inside out. We invited Karen Greenbury along (remember, she is touring Mexico with a 17 foot trailer, a dog and a cat ). Marilyn is an anthropologist, a quilter, a writer and a tour guide. She’s worked in Mexico for 26 years, living with an indigenous tribe. Marilyn is documenting their conversion from 15th century life before electricity or roads to the current time, where roads and television have connected them to the rest of the world and dramatically changed their lives.

This week she’s taking a group of people to Cuba for a Thanksgiving experience. Two weeks ago, she invited Karen and I into Tonala where we visited several of the best artists in Mexico and watched them work in their own homes. In the home of Angel Ortiz Gabriel and his family, we learned about the ancient art of  barro bruñido negro y tradicional (black and traditional burnished clay). His home has dirt floors and we watched spellbound as Señor Ortiz and his son hand-painted the clay figures with intricate traditional scenes. Señor . Ortiz makes all of his own paints and brushes. His daughter burnished the paint into the clay by rubbing it with small pyrite stones that shine like molten silver. After burnishing the figures, they are fired in a kiln.

I purchased a beautiful wall lamp, nativity set, and three figurines. His son has won national awards and Marilyn suggested if we wanted to buy art for investment purposes, this was the place to do it.

Only this burnished clayware retained its painting when it was dug up from burial grounds centuries later.

At one studio, we were offered a traditional breakfast dish consisting of large chunks of sweet potatoes and squash. They had been boiled with a sweet round ball about the size of a golf ball, which created a sweet caramel flavor. Hmm, good.

The artist, in a studio above his home, was making unique candles which resembled vegetables with whimsical faces carved onto them. These were commercial products which sold faster than he could make them and kept food on the table while he and his brother created one-of-a-kind masks that would scare the Adams family. With snakes and serpents crawling in and out of the mouths and eyes, they were brightly colored and intricate. Some had won awards in national competition. Those masks were not for sale.

We were invited to Jesus Gabriel’s papier mache factory which intrigued me. It was originally two homes joined by a garden. The front home housed the artist upstairs and provided a showroom downstairs. This operation was set up for wholesale and exportation rather than retail.

Gray newspaper and cardboard composition sheets were wetted down, then pressed into half-molds and dried in the sun. Then, the two halves were joined with strips of newspaper and glue, sanded, sealed, painted and signed by the artists.

I purchased a huge colorful parrot which now hangs on my patio to keep me company as I read, swinging in my Sky Chair. What a life.

The last weekend in October a few friends and I joined a small tour to Patamban in Michocan. I normally avoid tours, not liking the set schedules and waiting for people to get on and off of a bus, but this was an exception. The tour was led by Jill of Mexico Cultural Journeys and she’s a very knowledgeable Mexico historian.

This weekend was special. It was the day the village painted their streets with wild flowers for the Fiesta de Cristo Rey. The celebration recalls the moment Christ was crowned with a laurel and embraced as the Son of God.

It was spectacular. There were hundreds of buses lined up on the three-mile road from the highway into the village. A little mordida (pesos) helped us pass up the line and get to within a mile of our destination. Along the streets, vendors from all over Michoacan sold their wares. Baskets, wooden spoons, woven straw hats and pottery were everywhere.

Jill arranged for us to visit a couple of the well-known artisans in the village. I managed to purchase something heavy, but one of the boys in the family helped us carry my prize back to the bus. In exchange for our purchase we were allowed to use the bathroom. In Patamban there are only outhouses. This one was clean and had a curtain to separate it from the garden. And, there was toilet paper. It’s the little things in life that are important now!

The street decorations were unbelievable. Hanging from wires strung across the street every few feet were decorations made from straws, painted paper plates, Styrofoam cups embellished with ribbons and fabric and whatever else was available. The ingenuity of the Mexican people never ceases to amaze me. Each block had its own theme. Cardboard arches were constructed over the streets and adorned with miniature clay dishes, painting or straw embellishments.

Up the center of each street, in a strip of sawdust about three feet wide and two inches deep, hundreds of thousands of wild flowers and dyed sawdust were imbedded, portraying beautiful scenes or simple geometric designs. Every family was involved. The sun shone and the people were proud to show off their handiwork to their guests and to their Cristo Rey.

On the way to Patamban we stopped first for a picnic lunch at Lake Camecuaro. What a photo opportunity. It has been the site of several Mexican movies and is the centerpiece for many Purepecha legends.

“ Camecuaro” means the place of the baths. It is 1400 meters long, 100 meters wide and is fed by 1,300 underground springs. Three hundred year old cypress trees surround the lake and their roots form an above-ground labyrinth upon which to climb and take pictures. It’s a wonderful lake with many places for picnics, swimmers and even boat rentals. Vendors around the lake sell food, drinks and paraphernalia for the lakeside guests.

We stayed at Hotel Meson del Lago, just a short walk from the lake. The rooms were pleasant, clean and the breakfast was wonderful.

After lunch, we visited San Jose de Gracias, the village of the ceramic green pineapples and pigs. This is an ndigenous village and in every home you could buy the dark green pottery. I picked up an ornate green punch bowl with cover and six cups hanging around the bowl.

When the Franciscans came to Mexico they taught each village a different craft or trade, so they would have the ability to trade. Every piece of this shiny dark green pottery has originated from this small village since those days centuries ago.

Finally, we visited the town of Ocumicho to visit the artists who fashion the well-known mischievous devil figures and tableaus collected by art enthusiasts around the world. Women and children would call to us in the street and lead us to their homes in hopes we’d purchase some of their figures. My friend is collecting these and she likes the “naughty” ones. You open an innocent figure like a pineapple and inside are two clay devils performing X-rated acts. It was funny watching her trying to ask the locals where she might find this type of figure. She even blushed.

So, for these opportunities to see the real Mexico, share the experiences with friends and meet incredible artisans in their own homes, I am truly grateful.

Perhaps this column is my way of sharing some of the joy I have found in Mexico and encouraging others to step outside the box. Plan a trip here. There’s so much to do and so little time. 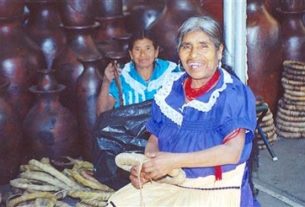