This is most definitely a post-Conquest recipe, with garlic, bacon, black pepper and wine, all of which were introduced by the Spaniards. It may be braised in a slow (325º) oven or on the stovetop. The bacon provides the marbling that is needed to prevent the meat from drying out in the cooking process, and the black pepper helps to seal in the juices. If using the stovetop method, the meat will need to be turned several times throughout the cooking process. Cooking time will depend on the age of the animal.

With a sharp knife, cut slits all over the surface of the venison and press two thirds of the bacon squares into the slits.

Place the garlic, parsley, pepper, wine and salt into a blender container and liquefy.

In a Dutch oven, cook the remaining one third of the bacon until it renders its fat and starts to crisp. Add the venison and brown on all sides. Add the blended mixture, pouring it over the venison. Cook, covered, in a 325º oven or on a low stovetop flame, until tender.

Remove the venison, allow to sit for 15 minutes and slice it as for pot roast. Return the slices to the pot and cook, uncovered, until it has absorbed most of the remaining liquid.

Back to the Kitchen! 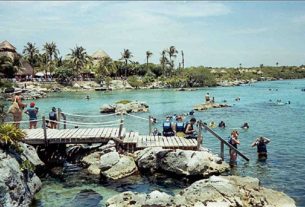