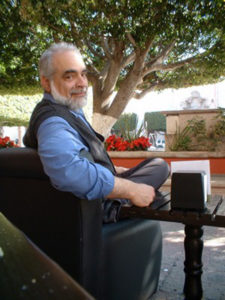 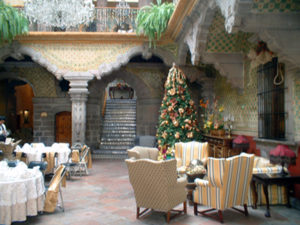 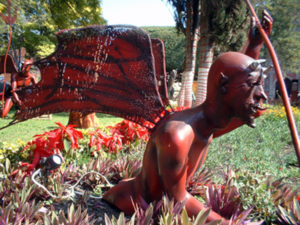 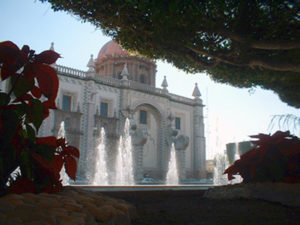 We sat at a shady table at an outside patio listening to Pavarotti sing an aria while watching the silvery jets from a plaza fountain in 70-degree weather. This is my idea of the best way to spend a weekday lunch break in mid-December. I did just that in Querétaro, Mexico after having had a delicious jamón con queso panini at the Café Mané in Querétaro’s Centro Histórico, an area of 10-square blocks in this bustling commercial center of 1.6 million inhabitants located three hours northwest of Mexico City.

When the aria ended and the jets were dwindling down, I asked my partner if she were ready to leave the Mariano de Las Casas Plaza with its masterpiece of Baroque architecture, the Santa Rosa de Viterbo Church. She responded lazily, “Not just yet,” and snuggled back in her chair. My feelings exactly. That “not just yet” could mean five minutes or an hour — after almost three years here, I’ve come to accept that in Mexico time is always relative.

A half-hour later we were walking along an alleyway towards one of the main roads in the historic district on our way to the Museo de Arte, Querétaro’s major art museum. After paying our 30 pesos each and touring the two floors of this grand building with mostly religious paintings from the 17th and 18th century, as well as two contemporary galleries, we headed to one of several other plazas in order to take a look at Harry’s New Orleans Café and Oyster Bar.

On the way to Harry’s we passed along a shopping concourse situated in a street closed to traffic. One side of the street held fashion boutiques and cafes, the other side is mostly occupied by the Santa Clara church with an open courtyard whose entrance is presided over by a statue of Neptune nestled inside an arch. Neptune? In landlocked Querétaro? A pagan god in a side plaza adjacent to a church? I shook my head and wondered…. But this is Mexico, I reminded myself, where the pagan past, native or imported, will always have a seat in the orchestra.

Harry’s has a cousin in San Miguel de Allende, the small artsy city about an hour from Querétaro where my partner and I are full-time residents. Harry’s San Miguel location is usually busy but why so many people in San Miguel want to try their New Orleans inspired menu when there are so many fine Mexican restaurants available is one of those traveler’s enigmas. And when I looked into this Querétaro Harry’s a few minutes later, I was no closer to solving the puzzle. Although this Harry’s had the same classy décor of, say, the Algonquin Hotel in Manhattan, with a menu that read like the Louisiana Purchase, it still baffled me that it could thrive in this quintessential Mexican city. Nevertheless, I wouldn’t have been surprised to see the likes of Tennessee Williams and Carson McCullers happily ensconced at the bar.

Next door to Harry’s stands the impressive Gran Hotel de Querétaro with a lobby that looks like a Hollywood ballroom and equally impressive suites that will set you back about $150 to $225 a night. Both these establishments look out upon the Plaza de la Constitución, about a block long, which on this date was proudly displaying an artificial Christmas tree that rivaled the one in Rockefeller Center for height if not magnificence.

The magnificence was abundant elsewhere, however, in the Casa de la Marquesa, for example. It was originally a private residence built in 1756 in the Baroque style with a lobby done in Moorish tiles for a beautiful woman with whom a Spanish marquis had fallen in love and is now a first-class luxury hotel. The dark seven-foot high cabinets and wardrobes in the lobby seemed to await the arrival of a royal couple, and indeed I thought that if King Philip IV, Queen Marianne and the Infanta Margarita stepped out of the painting by Veláquez, they would feel right at home here.

We strolled on from the Casa de la Marquesa to another plaza about two blocks away, the grand duchess of Querétaro’s historic plazas, the Jardín Zenea. Here we were delighted to discover four life-sized displays appropriate to the season: a nativity scene with a rather large flock of sheep in the background, the Annunciation with a Mary in bridal white and a gold-winged Gabriel, a native family preparing corn around a fountain, a dramatic grouping of red devils, and Adam and Eve with a huge serpent coiling around a tree limb. This serpent had an immediate resonance for me as we had remarked on the-serpent-coiling-around-the-globe symbol in several of the religious paintings in the Museo de Arte. Satan as a serpent consuming the world, it seems, was a preoccupation in 17th century Mexico and was perhaps still a forceful presence in present-day Querétaro.

When we had seen all of these wonderful public plazas and felt ourselves to be in possession of a knowledgeable overview of the genre, we headed back to the first plaza, the one where we had had lunch and listened to Pavarotti, indeed our favorite of them all.

A slight surprise and another treat awaited us. The fountain was now surrounded by a large number of school children in their school uniforms of various styles and colors. The children were running and skipping and twirling like children everywhere when they have been liberated from parental discipline. I commented to my partner that they had reverted to the free world of unselfconscious abandon that they had been born to, and we both watched them frolicking and chasing one another like the happy creatures of an Arcadian pastoral. The plaza was no longer ours to behold, but the sight of these children had captivated our hearts.