A riotous image of a storm of people bolting down a wide Mexico City avenue, in the midst of a live Maldita Vecindad rock performance from the back of a moving truck, comprises one of many memorable video images from that band’s new, self-produced history of itself.

The scene describing the pandemonium on the day of the 30th anniversary of the massacre of students at Tlatelcoco Square (1968 – 1998) comes from a documentary made (on practically no budget) over the course of the last decade. Shot mostly with a hand-held camera by members of the five-piece band and a little help from filmmaking friends Angel Flores and the team at Producciones Kitsch, Maldita hopes to release the half-hour video to the public later this year. 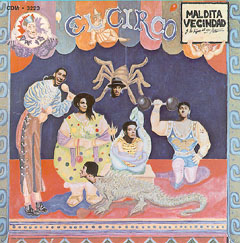 The band defied small-minded managers and critics years ago by taking its sound on the road when it was virtually unknown.

It paid off. Now the visionary musicians enjoy a fan base encompassing the breadth of Europe and the United States.

The phenomenal success story of Maldita Vecindad (Y Los Hijos Del Quinto Patio) as told by goateed drummer Pacho is also the story of the rise of alternative rock in Mexico, historically interlaced within the patchwork of social change in this country.

The video begins with the devastating 1985 Mexico City earthquake. So, too, said Pacho, does the story of Maldita Vecindad.

“The earthquake was very important for our generation,” Pacho said. “A lot of stuff happened after the quake. The soldiers in the street were a problem. It was really the citizens who had to recover bodies from the rubble and rescue the injured.”

Pacho, 35, noted that many of the city’s young went out and helped recovery efforts during the tragedy – “punks from gangs mixed with rich kids” and Maldita formed just after this unprecedented event.

Other artists, of all persuasions, also banded together to help support the “damnificados” – people made homeless by the quake – and an alternative movement started to emerge.

“Suddenly we were in the middle of a big solidarity thing, a new cultural push,” Pacho said. “Members of our band were journalism, art, and history students. We never wanted to be rock stars.”

The first, self-titled album, released in 1988, was a success. The classic “El Circo” followed in 1991 selling more than 600,000 copies in Mexico: a stunning effort for any band. The music combined a feverish mix of influences, incorporating, as Pacho said, “bolero, mariachi, funk, rock, ska – all the sounds coming out the windows of a barrio neighborhood.” Along the way, the band toured the United States; met Perry Farrell of Jane’s Addiction (more recently of Porno For Pyros fame); and toured Europe twice playing festivals such as Glastonbury; in countries like Germany, Ireland, Holland, Spain, France, Denmark, Norway; with bands such as INXS, Bod Dylan, Sonic Youth, Faith No More and Leonard Cohen.

The affable drummer expanded on some aspects of legendary Maldita lore, and the current rock scene in Mexico:

The Perry Farrell Connection: “We were playing the Cinco de Mayo festival in San Francisco in the early ’90s, and heard that Perry was making this film called “Gift.” He wanted to get to know us because he was filming some of that movie in Mexico.

“We had breakfast with him and we got on well. In the script he comes into a club and it’s us playing and he joins us on stage.

“We did it, at Club L.U.C.C. a venue since closed down by the government. In the end a series of legal problems with the record company saw the whole thing killed off and Perry had to hand over the rushes. We were never in the film.”

“We did free shows and stuff, like any new band. The same in Europe. An initial two months of hard gigging turned into a return-six months of touring with all the rock superstars, in all the top festivals and venues.”

The state of Mexican Rock:”In Mexico there’s no college radio, no independent radio, no alternative venues. It’s wonderful that places like the Metropolitan and Palacio de los Deportes exists. But they’re expensive. We’re not a communist band or anything, but you can see that current developments have a basically big industry logic.

“We need the other aspect: the smaller venue, the cheap alternative. But the politicians are scared. They think it’s horrible music for horrible people.

“If you don’t have an industry-supported hit, you don’t get anywhere. It’s the biggest city in the world and there’s nowhere to play. This boils down to the issue of government censorship. Sometimes it seems like we’re going backwards instead of forwards.”

A culinary tour of Xalapa: Dining in the home of Jalapeños