A Mexico book by Richard Rhoda and Tony Burton 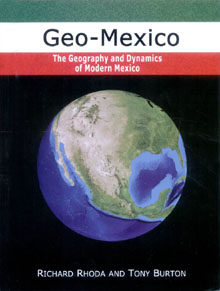 Did you ever wonder why rain usually falls in the late afternoon or night during the summer in western Mexico? Can you figure out why the death rate for Mexicans is four times higher than for US-born workers in the southeastern USA? Do you know why “harmless” organic fertilizers washed into a lake can eventually kill every living thing in it?

If you find these questions intriguing, you’re going to want to own a copy of Geo-Mexico by Richard Rhoda and Tony Burton. This is what the authors call a “real” geography book and believe me, it is a far cry from the dull texts foisted on students years ago.

Rhoda and Burton tell us that geography as a subject is — like Mexico itself — “often under-appreciated, equated with memorizing the names of countries, capitals, mountain ranges and rivers.” However, these authors claim that “real” geography is much more interesting and even exciting because it “focuses on the interaction between individuals, societies and the physical environment in both time and space.” This book, in fact, includes subjects like female quality of life in Mexico, access to cell phones, urban sprawl, the survival of the Tarahumara Indians and even gives us the touring route of the Hermanos Vázquez Circus.

In my opinion, if this is a geography book, it is geography unchained. I have to admit that as a schoolboy, I hated Geography the Subject. Eventually, however, I became interested in amateur radio and as I began to chat — by voice or by Morse Code — with fellow “hams” all over the world, I started plastering the walls of my radio shack with maps. The climate, mountains and deserts of far-away places suddenly became very interesting topics I wanted to know all about. Amateur radio humanized geography for me and that is precisely what this book does for the geography of Mexico.

If you are one of those people who always want to know why things are what they are, you will especially appreciate the clear and understandable explanations found in every chapter of this book. Take the phenomenon of late afternoon rain in the summer. Geo-Mexico explains that there are three basic types of rainfall in this country. One of these is called convectional rain and it is associated with hot afternoons:

“During the morning, warm air near the surface collects great quantities of moisture. As temperatures increase towards mid-day, pockets of moist warm air are sent upwards, quickly leading to condensation and clouds. As the clouds continue to rise, they cool to the point where precipitation becomes inevitable. Afternoon and evening rain showers result, often heavy and accompanied by thunder and lightning. Convectional rain occurs throughout Mexico but is a summer phenomenon since this in the time of year when solar radiation and ground heating is at a maximum.”

If you don’t happen to know how non-toxic fertilizers could result in the death of a lake, the curious concatenation producing this unfortunate result is explained in Chapter 7 of this book, Water Issues and Hazards:

“The use of fertilizers greatly increases the amounts of nitrates and phosphates in …(the) water. The overabundance of these nutrients in water stimulates an explosion of some algae. This leads to a secondary explosion of oxygen-consuming bacteria which feed on the algae. This drastically reduces the water’s oxygen level, killing fish and plants. This process, known as eutrophication, can effectively kill the body of water. Fertilizer pollution is widespread in Mexico, particularly in the wide agricultural band stretching from Jalisco to Veracruz. At present there are no laws or regulations governing the discharge of agricultural wastes.”

The book also presents the kind of surprising facts about Mexico that readers have come to expect from the writings of Tony Burton. Did you know that Mexico has more species of pine trees than any other country? That Mexico’s diverse economy produces about $1.6 trillion in goods and services every year, more than Canada or South Korea? That Mexico’s population of 110 million makes it the eleventh largest nation on earth? That migrant workers in the USA sent $25 billion (yes, billion!) back to their families in Mexico in 2008?

Little-known statistics like these jump off most pages of Geo-Mexico, making it one of those reference books you’ll be consulting again and again.

Geo-Mexico will surely become the geography book of choice for ethnically-oriented courses in the USA and Canada. Should a Spanish version ever appear, I’m sure it would be immensely popular in schools and universities south of the border. If only we’d had textbooks like this one when I was a youngster. Congratulations to Richard Rhoda and Tony Burton for unchaining Mexican geography!

For more information on the book, as well as other reviews, see Geo-Mexico on the web.

Did you know? Mexico has five of the world’s most endangered heritage sites