So you are an American in Mexico, married to a Mexican citizen and want to move to the U.S.; maybe to work, visit family, go to school or some combination. This short description is the required process for the I-130 Petition for an Alien Relative. The process can be completed while you both live in Mexico or while the spouse from the U.S. lives and works in the U.S. The process is long, tedious, and mentally stressful. For those who are not married yet, the best option is to apply for an I-129F Fiancée Visa. This latter Visa allows the foreign national into the U.S. and 90 days to get married. The key is that you can not be married before applying for entrance into the U.S.

Regardless of our paperless society, the key to the I-130 process is to keep every scrap of paperwork that pertains to your life together. Airline tickets, joint rent receipts, leases on property or mortgages, bank accounts, life insurance policies, telephone bills, e-mails, letters, birthday cards, correspondence from friends and family, events attended as a couple, and “lots” of photos of the “couple” with any and all family members from both sides are extremely helpful.

Prepare to bare your soul! You will voluntarily provide and pay to describe all social and economic arrangements from the day you were born until the present. The U.S. Federal Government agencies will have detailed information about your person (both spouses) that even the FBI would admire for accuracy and depth.

A helpful hint. Whatever document or stage you are at, make and complete two originals of each form and document just in case one packet is lost. Also send in every packet by certified mail for a receipt. Obtain a professional and certified English translation of the Mexican marriage certificate and the birth certificate of the the Mexican spouse. For example a modern languages professor friend at a university can do this for you or a translation service.

The I-130 is a simple two page document to get the process started. For a U.S. citizen or naturalized citizen of the U.S. your citizenship is key to the whole process. As a U.S. citizen your spouse will have Visa priority over all others.

A: Complete the I-130 packet and accompanying G-325A Biographic Information form. This information is very critical as it will be used in one form or another in all of the following steps, forms, and procedures. The G-325A must be signed by each spouse so plan ahead. The Bureau of Citizenship and Immigration Services (former INS), has to approve your petition before it is sent to the Department of State National Visa Center (NVC) for processing. The average time for processing is one year for the I-130. The petitioner will receive a letter that the petition was approved or not and a case number. The I-130 and G-325A Documents can be seen on the government website at www.dhs.gov/dhspublic/display under the heading of forms and fees. As of March 1, 2003 the Immigration and Naturalization Service (INS) was absorbed into the Department of Homeland Security under the title of Bureau of Citizenship and Immigration Services. The cost of the I-130 is $130.

B: After the I-130 is approved you will receive a “notice of action” letter. The Visa petition goes to the Dept. of State NVC main office in Portsmouth, NH. An “agent of choice” (form DS-3032) letter will be sent to the foreign national spouse. This letter selects where future documents will be mailed; directly to the U.S. spouse, attorney or foreign address. It is suggested due to the uncertainty of foreign post to have an U.S. address designated. Believe me, we tried the Mexican address first and things sometimes arrived and sometimes did not, but in any case, mail always arrived late or at the last minute. This time process depends upon the backlog at the NVC and the urgency of the return of the agent of choice letter. Two-three months is probably an average.

C: At this point the NVC will send an Affidavit of Support I-864 to the U.S. spouse. This document is filled out according to varied specific financial and family circumstances. This basic part involves the most recent three years tax returns, an IRS tax release authorization and other job and biographic information. Carefully read and re-read the specific instructions! This document is the written agreement the petitioner has with the U. S. Government that the spouse upon entering the U. S. will not become a public charge, and if so that the petitioner will re-imburse any government expense in said case. This document must be stamped by a Notary Public.

D: The petitioner’s spouse receives packet number three. This is a second biographic data sheet (OF-230, part I) and document checklist to return to the NVC. This is straightforward and easy to do if you have been keeping good records and all paperwork. This is sent back to the NVC for further review and approval. It averages nine to twelve weeks.

E: At this point the case will be forwarded to the appropriate Consul in the Embassy or Consular Section in the specific country where the foreign national spouse lives. The petitioner’s spouse will receive packet number four that includes (OF-230, part II); the application for Immigrant Visa and Alien Registration. This document is the sworn statement of the petitioner’s spouse that he or she is not a health risk, terrorist, previous illegal alien or other criminal risk to the U. S. This form is not signed until you are in front of the Consular official. Along with this packet is information about how the Visa Immigrant Interview process works in the country where the spouse lives. In Mexico for example, Ciudad Juarez in the state of Chihuahua is the ONLY place immigrant Visa interviews are done. Cuidad Juarez must be considered somewhat dangerous by our government as a “notice for your protection sheet” is included. This is very entertaining reading! Also there will be information on the medical examination and all the related processes-documentation needed for an interview. I hope you have kept all previous paperwork in good order because ALL of it is required. Average time is between two or three months depending on backlog and U.S. – Mexico international relations at the time.

F: The petitioner spouse receives an interview letter after the Consulate has approved the petition file and receives all necessary clearances. It is suggested that both spouses go to the Consular Interview!! I mean, it is a marriage after all and stress should be shared equally. Read and re-read the specific instructions. A medical exam has to be completed BEFORE the interview. This can usually be done the day before, but plan for the unexpected. At the medical exam, vaccinations will be given if no proof of prior vaccination exists, a full physical exam will take place and x-rays are taken for pulmonary abnormalities. You will be charged according to what vaccines are administered and specific clinic fees. Figure $100-200.

G: Day of the Interview. Chaos!!! Plain and simple the area in front of and outside the Consulate at Ciudad Juarez is a human zoo. You will find, in typical Latin style, lines of people seemingly going nowhere, massive disinformation, Mexican street vendors of consulate documents, “helpers”, and people running around like chickens with no heads. Even though the Consulate does not open until 7:00 am, it appears hundreds of people have been waiting in line for days. Your admission into the Consulate is the interview letter with a specific time and date. Somehow push your way through the mob and present the letter to the security official at the appropriate gate and you will be allowed in after a complete airport-type shakedown.

The security people will be calling out the appropriate “times” needed to enter.

Once inside the “gate” you are greeted by the peace and tranquility of a once again ordered and organized place. You will wait outside the actual office buildings area in fold-up chairs. Your will see other couples and think to yourself. “Did they go through what we did to get here?” You will wait until your interview time approaches and are invited into the consular office for a complete document check. After the check, which is quite efficient, you may or may not be called in for an in-depth personal interview with a consular official, as a pair or as individuals.

After this step you will be once again led outside to sit while documents are processed. It can be hot in Juarez but never fear, there are authorized Mexican vendors who will sell refreshments for a small dollar fee! After all you are now in the U.S. Consulate and dollars are official currency.

After an appropriate wait of one to four hours, you will be called back into the consular office buildings. If the Visa has been approved then your Mexican spouse will sign the OF-230 part II in front of the consular official. You will pay $260 dollars, (make sure to bring the exact amount) for the Visa application fee and the $100 Visa issuance fee. You will receive a one inch packet of forms and paperwork that are to be presented at the “point of entry” into the U. S. in the next six months; use it or loose it!!

If you cross over at El Paso, Texas, then the Visa document gives a specific bridge-entry point to cross at. In our case we were mentally and physically exhausted from our “day in the fun and sun” We walked over the international bridge the following morning to spend the day in El Paso and “get the passport stamped”

Congratulations! Your legalized spouse will receive a “Welcome Notice” from the Bureau of Citizenship and Immigrations Services (former USDOJ-INS) The “green card” (mica in Spanish) will arrive at the U.S. address in a month. It is impressive!! Where else in the world is an immigrant going to receive a welcome letter- congratulations on a resident status and a wish of good luck? Well maybe if you had a million bucks in a Swiss bank account it would be easier. 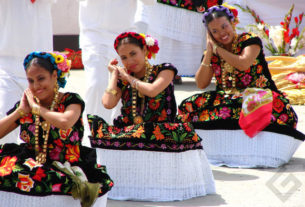 Secrets hidden in the Mexican sierra