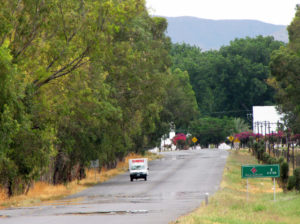 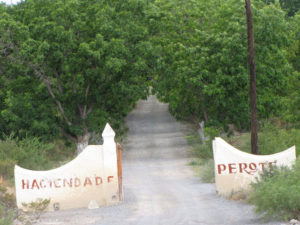 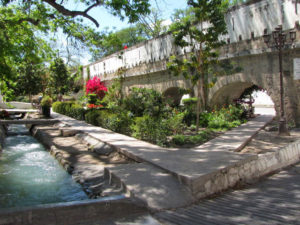 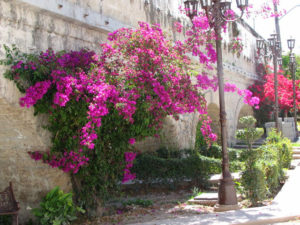 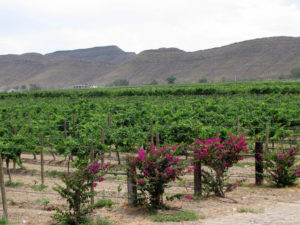 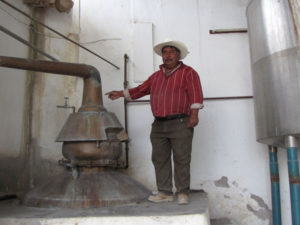 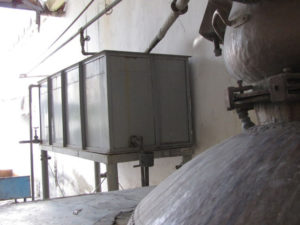 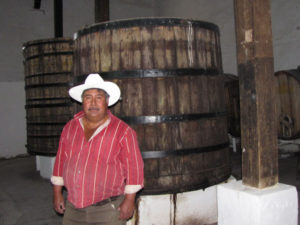 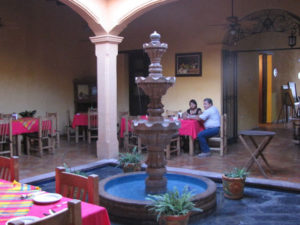 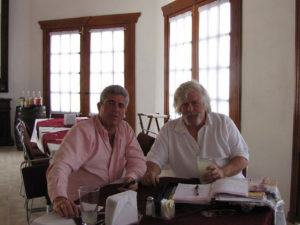 Indian on the high desert: “When poor Mexicans have no money for beer or liquor they say, ‘There is always sotol.'”

Archeologists speculate that the preferred drink for some 9,000 years in north-central Mexico and the south-central U.S. was sotol, which takes its name from the plant used to produce it.

Sotol’s lofty status fell with the introduction of European spirits and distilling techniques. However, an appreciation of the liquor remained.

Now in the area hosting the oldest vineyards and winery in the Americas, Antiguas Bodegas de Perote, S.A. de C.V. or “Perote” is taking the lead in making sotol readily available as it regains its previous popularity.

To discover a few of sotol’s secrets, I met with Señor Ignacio Chacon at his hacienda. He is the second largest wine producer in Parras, Mexico and an expert on sotol.

The Chacon family purchased the 400 year-old hacienda from two brothers of Francisco Madero, the first President of Mexico, in 1936. The hacienda was the family home but since 2002, has slowly been transformed into a first class resort-hotel complex with twenty-six double rooms and six two-room cabins.

Quickly assuming a first name basis, Ignacio gave me the run of the place and answered all my queries.

Sotol is distilled from the Dasyliron wheeleri, commonly called the “desert spoon,” which grows wild in northern Mexico, west Texas and New Mexico. Sotol is the state drink of Chihuahua, although few commercial outlets produce it.

Like many of the mezcals or mescals of central Mexico, sotol production is an art.

The desert spoon plant served the ancients well. Sandals, ropes and baskets are among the items made from the plant. The base of the cooked sotol stem is eaten like an artichoke. Once scraped, the remnant resembles a spoon and can serve as one.

However, an Einstein among the early people gave us a great spirit in sotol.

If he didn’t do it 9,000 years ago, as many archeologists believe, then he definitely accomplished the feat about 800 years ago. Chihuahua Indians fermented sotol into a beer-like concoction during the 1200s. The Spanish introduced distillation techniques that produced a spirit. The result can be thought of as a cousin of mescal and tequila.

When you take a shot of sotol, consider the liquid. The desert spoon takes about fifteen years to mature. At nine to fifteen feet tall, one plant is required to produce one bottle of sotol.

Unlike other members of the agave family that flower once in their lifetime, sotol — often considered a wild agave — produces a flowered stalk every few years. Once mature, it is harvested like agave for making mescal or tequila. The leaves are removed and the center core carried to the distillery. The core is cooked or steamed, shredded, fermented and distilled.

Señor Chacon explained, “Sotol is common to the Mexican states of Chihuahua, Coahuila and Durango. We have 200,000 hectares (nearly 500,000 acres) to harvest here. We burn it in the desert then bring the core to the distillery. The core material, from which we distill the juice, ferments in a large pool for twelve days. It takes eleven pounds to produce one liter of sotol.”

With that background information, Ramon, one of the ranch hands, walked me through the process.

The fermented juice is poured into a brass distiller where it is cooked for one day while being continuously stirred. The steam travels up the pipe and flows into a rectangular holding tank ,which contains water to speed the cooling process. The product stays in the holding tank, still being stirred for about a day. The cooled liquid drains into large pots below the spout.

The sotol is then taken into the first storage room where it is pumped up into large silver-colored tanks. It remains there from eight to eleven months. At the proper time, the sotol is moved from the metal storage tanks into wooden barrels where it is aged for up to two years.

Once familiar with the processes, I met with Señor Chacon over cold drinks. He’s now producing 10,000 twelve-bottle cases of 80-proof organic sotol and 15,000 to 18,000 cases of twelve bottle of wine per year. Each box holds nine liters.

The grape harvest takes place at the end of July and August whereas sotol is gathered during the winter. Our discussion eventually moved onto the commercial aspects and I asked if sotol was finding a market in the United States.

He set his drink down. “We’re selling all the sotol we produce in Mexico right now. However, there are negotiations with China and the United States to bring the drink to those markets.”

After our discussion, I decided to research sotol a bit more. It’s normally taken as one would use tequila, with salt and a lime. However, I wanted the pure taste. Antiguas Bodegas de Perote produces both reposado (aged) and blanco. I tossed down half a shot of the reposado, expecting fire. Instead, I discovered a medicinal smell and a neutral taste. It seems “neutral” shouldn’t have a taste, but this unidentifiable flavor has to be defined as neutral.

After a few moments allowing my taste buds to clear, I tried the blanco, which corresponds to plata or silver in other sotol brands. The medicinal odor virtually disappeared, but it possessed a neutral taste that draws the drinker.

Once again I was perplexed in understanding the flavor, especially a neutral that urged, “Take another sip.” I discussed the blanco taste with several of the desk clerks. Jose described it as sweet, but I didn’t taste sweet. Yet something in it is inviting.

I was definitely enjoying this part of my research and in earlier years have suffered the effects of drinking both mescal and tequila into the wee hours. I contemplated carrying my research into this area for the benefit of the reader, especially given the draw of that unique non-flavor, but decided against it. I didn’t want Señor Chacon to think a wild man from the North had invaded his wonderful hotel complex. I also realized I’m getting too old to mistakenly think along about midnight, “You know I’m man enough to ride a large farm animal.”

With the weekend crowd gone, the hotel staff and ranch hands had more time. I questioned them concerning the effects of a night of enjoying sotol. Almost to a man they insisted they preferred tequila or mescal. I believed them until I stopped at the kitchen door for a refill on my coffee and happened to ask the women. They insisted sotol had far more powerful effects than either tequila or mescal. My guess is the aged sotol goes down so smoothly the men don’t realize the kick until they’re past the stage of accurate discernment.

I hated to leave the Antigua Hacienda de Perote. I’d enjoyed myself and made several friends, but I had more Mexican wine and spirits to explore on my journey.

Plus, I need time to figure out how “neutral” could be a flavor.