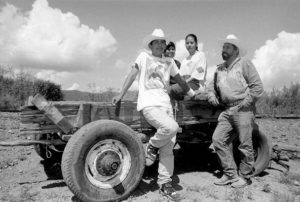 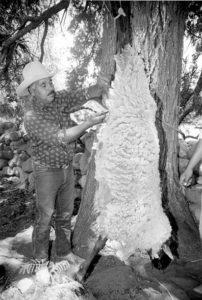 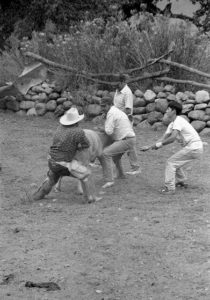 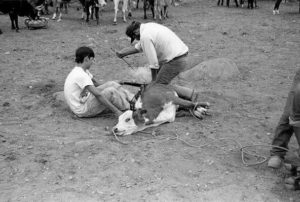 “Mike, are you going to kill the borrego?” Berto Ledézma wanted to know.

I shook my head. “I’m an eater only. I don’t like to get personally involved with my meals.” Berto grinned, his handlebar moustache widening his smile. No problema.

I was spending the day with two families of friends from our small village. We were planning to drive up the valley for a big Sunday cookout. Another family, the Velóz’, had invited me and Berto’s question was the first time I realized our lunch was still on the hoof. It didn’t embarrass me to turn down the offer to dispatch the sheep. Everyone knew the local kids had already had to patiently explain to this protesting Gringo why it was necessary to do in the rattlesnakes and chase down the wild dogs out on the plain. (Both do major damage to young calves).

We mounted our vehicles, a Ford Bronco and my Isuzu Trooper, and dusted our way through town towards Rusio to pick up more family members. The Velóz’ rode with me: soft-spoken Carmen, whose polychrome pots are decorated with whimiscal turtles or lizards and Jesus, a cowboy who spends more time helping his wife with pottery than riding the range. Three of their four children were also with us. There were 19-year old Chayo, the daughter who really manages the house and little four-year old Juan jammed in the back. António, a 13-year old who is already an accomplished bull rider, drove my truck, while I rode shotgun.

We bounced along a rutted track past fields tall with August maíz, or newly sown with frijól. By November those bean fields will be knee-high carpets of green, ready for harvest. Between the crops, we descended and climbed through rocky arroyos and skirted clusters of spiny prickly pear cactus. The whole valley was lime-green with August rains. The dry early summer had finally given way to the life-giving “monsoon.” All was well.

Rusio is a cluster of maybe 15 adobe homes, a one-room school and a small white church. Judging from the crowd which met us, it looked like a third of the village was related to the Velóz and Ledézma clan. Two pickups were added to our caravan and soon they were piled high with tables, chairs and huge discos, which look like woks on legs, for cooking.

We were almost ready to continue on to our picnic area when an elderly gentleman walked down the hill leading a large, fat sheep on a short cord. His coat was soft, thick and matted with dirt. He bleated plaintively. The borrego was definitely having a bad hair day, and it would get worse.

He was to be the guest of honor at dinner.

With much shouting and pulling and lifting, the men managed to lever the critter into the back of a third pickup, which had a tall grill of metal tubing surrounding the bed. The vehicle had clearly been designed for transporting livestock.

The upper reaches of the valley are still thick with walnut trees and we wound our way through shaded groves until finally parking near a stone corral. The trucks were unloaded and the women immediately set about chopping veggies and starting fires. Without ceremony, a rope was draped over a tree branch, the sheep was hauled up by the rear hoofs and Santiago “Chago” Ledézma did the deed with a quick swipe of a razor sharp knife to the jugular vein. It was over in seconds without a single “bahhhh” of protest.

The kids helped with the skinning, and soon meat was ready for cooking. Chago, meanwhile chopped slabs of fat into small hunks and dumped them into a drum boiling with oil. Before long, we were all chowing down on chunks of the freshly cooked chicharrones, mutton and onions. For dessert, walnuts and apples were picked from nearby trees.

At one point, a herd of about 40 cattle interrupted our meal. Three cowboys drove the cows, calves and two bulls through our dining area and ushered them into the corral. The vaqueros joined us and we all sat in the shade, eating and helping ourselves to more Tecate. Children played, women gossiped, men discussed the price of beef on the hoof and António gave me a lassoing lesson. Before long, I ruefully decided to stick to basketball. I turned to lean against the corral where I divided my time between watching the milling cattle and the large extended family of brothers, sisters, aunts, uncles and cousins.

It was a peaceful, relaxing afternoon.

Then the men levered themselves to their feet, stepped from the cool shade into the hot sun and began sauntering down towards the corral. One of the cowboys, Julio, mounted his horse. Others were limbering the kinks out of lassoes.

“An herrar, a branding,” he replied before vaulting over the wall and into the corral.

Mexico is often like a jigsaw puzzle with a couple of pieces left in a drawer. You often don’t get the whole picture until you search. I had thought we were going on a picnic–maybe some burritos or pork chops cooked over an open fire. I then discovered we were going to have really fresh meat. Next, I found out there was business to be completed–even on Sunday–the branding of young calves. The mystery of what’s going to happen next is part of the joy of passing time in Mexico.

Every herrar I’ve attended has been frenetic and this one was crazier than any of the other brandings. Picture 40-odd bulls, cows and calves swirling around a pen the size of half a basketball court. Toss in ten men and an adolescent with lassoes along with one cowboy on horseback. Then add a subplot where two large Brahmin bulls don’t like each other and enjoy sparring within the crowd.

Cowboys wove their way among the bawling beasts, trying to loop the lasso over the neck of a calf. When one was successful, a second cowboy snared the hind hooves and both ropes were stretched tight. Then a third cowboy bulldogged the yearling and held him until the youngster was branded and vaccinated. Meanwhile, the bulls were still chasing each other and the cows were in constant ebb and flow.

The women and little kids hung over the stone walls, laughing and shouting encouragement. One calf was too tough for Berto, who was trying to hold it down. Men chuckled and women cheered as Berto was launched head over heels into the air. He dusted himself off, wrestled the calf to the ground and straddled him a second time.

Berto sat there for about five seconds and once again he was airborne. It took four men to subdue that ” becerrito.”

The day and the men’s energy waned, but António didn’t. At his age he is expected to do a man’s work and he did, tackling the smaller calves while older uncles and cousins offered good-natured encouragement. Jesus watched, quietly proud, content to let his family and compadres handle his son’s instruction.

Finally, the day’s work was done. The calves were branded, given their shots in front of their protesting mothers and all the animals were released. It had been hard, dusty work. But it was completed in a party atmosphere of fellowship and friendship. There had been a job to do, but what could have been a chore was another excuse for a family fiesta.

Everyone had had a good time… except the calves and the guest of honor, whose company we all enjoyed. 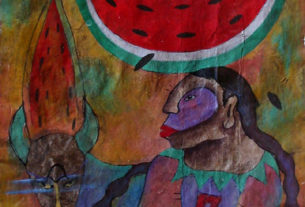