Insurance can seem quite complicated. What is best for you and why? If you’re spending time in Mexico, can you take your medical policy with you? Or should you purchase travel insurance? Are there other alternatives?

What is admitted health insurance?

In the insurance industry, “admitted” means “licensed, registered and permitted to sell policies.”

Almost all health insurance policies are admitted as well. In Mexico you could buy one from a local broker.

In the U.S., insurers are admitted in every state, which is why Blue Cross — for example — is separately incorporated in almost all states. Every state has laws prohibiting non-admitted outside insurers from selling to their residents. Indeed, for insurance purposes, the U.S. is like 50 separate countries. To prevent other state regulators from fining them, U.S. medical insurers have rules limiting your coverage if you are not resident in that home state for six months a year. In this way, they can argue to other state regulators that they are not insuring people in other states and avoid million-dollar fines and regulatory scrutiny.

So there are barriers to portability of insurance policies caused by regulation and sovereignty. This can be avoided in the case of a car, since you can import the car and license it in the new country, or sell the one car and buy a new one if you move.

For health insurance, when you live in two jurisdictions like Mexico and the U.S.A., or live in one and want to return for medical treatment to the other, things become difficult. A Mexican policy would not let you return to the U.S. for treatment and forces you to buy travel insurance when on a trip home. The catch is you generally can’t buy travel insurance to travel in your home country! However U.S. domestic policies restrict your time in other jurisdictions, have residency requirements or limit the benefits abroad, and are expensive!

Is travel coverage the solution?

Let’s define travel cover: Travel insurance is usually for short intervals but I have seen some policies from Australia that can remain in effect for up to three years.

Travel insurance covers accidents and emergencies only, and won’t cover urgent or elective medical problems. Travel insurers expect you to end your trip and return home for elective or urgent treatment, and some policies require you to return immediately once a diagnosis is made. For example, if you were diagnosed with cancer while on a travel policy, you might urgently need to commence treatment, but winding up your affairs before returning home to begin treatment might not be a case of life or death.

Travel insurance is not renewable. If you have a serious medical problem, your coverage will end at the policy’s expiration date or when you return home. The underlying assumption behind travel cover is that you have proper medical insurance at home and can return to it in the event of an urgent or elective medical condition.

For U.S residents, because insurance is governed at the state level, policies have provisions limiting cover if you are outside your state for more than six months. Companies assume you are in another state. They don’t seem to consider that you might be living out of the country! In fact, they might cancel your policy if they learn you are resident out of your home state for more than six months.

If you are resident outside your home state for only 6 months or less, then travel cover will do, so long as you maintain your policy back home.

Canadians who reside outside Canada for 183 days annually and satisfy a few other conditions can live tax free. But they cannot remain on their provincial medical plan back home, and it takes three months to enroll again after returning permanently to Canada. Until you are back on the roster, you could pay thousands of dollars per day for a hospital bed in Canada.

Canadian hospitals charge U.S. prices to non-resident Canadians and foreigners. So if you are still paying Canadian taxes and a resident, you can buy a “snowbird” travel policy. If you are not, then you need medical insurance.

The British case is similar, in that a few years ago the National Health Service changed the rules regarding residency. If you are not “ordinarily resident” in the U.K., then you’re not entitled to free NHS treatment. And you’re going to pay high prices unless you have expat medical cover.

You can also consider an international non-admitted health insurance policy. These policies are not only are cheaper than a domestic U.S. policy, but also really international and allow you to live outside the country.

The big names like Blue Cross and Aetna are exclusively interested only in group plans for American employee groups abroad.

The U.S. industry for individuals got its start insuring tens of thousands of missionaries, and there are good inexpensive solutions allowing you full cover in Mexico (or anywhere you want) and return access for treatment to U.S. hospitals.

For these insurance providers, you must have a residential address outside the U.S., and you must live outside of the U.S.A. for six months per year cumulatively. So you can have international portable health insurance and the best of both worlds. 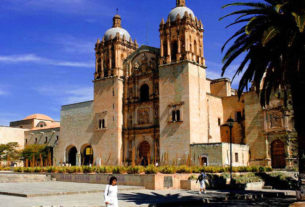 History of Oaxaca: The Colonial Era