Strange, but true. Charles Embree’s A dream of a throne, the story of a Mexican revolt, is based on the story of the Lake Chapala area during the 19th century.

Embree was born in Princeton, Indiana, October 1, 1874, the son of lawyer David Franklin Embree, member of a prominent pioneer family, and Mary Fleming Embree. He was educated in Princeton public schools and entered Wabash College in the fall of 1892. After three years he left college without graduating to devote himself to writing, and achieved immediate success. His first book, a collections of stories entitled For the Love of Tonita, and other tales of the Mesas was published in 1897. Its success led to two full-length novels.

On January 18, 1898, Embree married Virginia Broadwell. The newlyweds moved to Mexico, and lived in Chapala for eight months in 1898, before moving to Oaxaca. The precise motives behind their decision to spend two years in Mexico remain frustratingly unclear.

Embree’s second book, dedicated to his wife, is set in the Lake Chapala region, but was written while they were in Oaxaca. A Dream of a Throne, the Story of a Mexican Revolt (1900), is illustrated with five black and white drawings by Henry Sandham (1842–1910), a very well-known Canadian illustrator of the time.

While in Oaxaca, Embree also penned a short newspaper piece about the famous American anthropologist Frederick Starr, who was conducting fieldwork there, reprinted as an appendix in Starr’s In Indian Mexico.

Embree’s third book, illustrated by Dan Smith, was A Heart of Flame: the Story of a Master Passion (1901). In addition, he had several short stories published in McClure’s Magazine, between 1902 and (posthumously) 1906.
In 1903, in recognition of the distinguished place he had already achieved among American novelists, Embree was awarded an honorary Master of Arts degree by Wabash College.

Embree and his wife moved to Santa Ana, California. Sadly, the couple had not long celebrated the birth of their only daughter Elinor in 1905 when Embree was taken seriously ill. He died on July 3, not yet 31 years old.

It seems a particular tragedy that someone who had produced several books, including work of this magnitude, should have died so terribly young. In his short time in Chapala, Charles Embree had acquired an excellent historical and geographical knowledge of the region at a time when American travelers to the lake were few and far between.

The publishers advertised A Dream of a Throne: the Story of a Mexican Revolt in glowing terms: “A powerful and highly dramatic romance, dealing with a popular Mexican uprising half a century ago. It is a novel of adventure and of war, and its strongly contrasted characters glow with life and realism. The writer’s thorough knowledge of Mexican life gives him a wealth of new material; and the descriptions of scenery at Lake Chapala are vivid, full of color, and alive with mountain air”.

The book is a remarkable achievement for the time, and for an author only twenty-six when the book was published. Set in the mid-19th century, it is a highly charged, gripping account of love, intrigue and treachery. In the course of the novel, Embree refers to historical events such as the Pie Claim, and to 1846 when “General Taylor crossed the Rio Grande and invaded Mexican territory.”

From a geographical perspective, Embree displays an accurate and astute knowledge of all his lakeside locales. The spelling of all place-names, with the exception of Ajicjic and Tuxcueco, is exactly as it is today. Details of clothing, habits and customs all ring true. Equally, the clear parallels between events in the novel and real, historical events shows that Embree had a considerable knowledge of the region’s 19th century history. As one small example, the story begins in the shadow of St. Michael’s hill in Chapala in May 1833, amidst fear of an epidemic of smallpox. In real life, the nearby city of Guadalajara suffered a cholera epidemic in the summer of 1833.

By the end, the novel has returned once more to St. Michael’s hill, and concludes by explaining how the cross on the hill’s summit was erected in memory of the book’s hero who had been executed there.

This novel appears to be the first novel written in any language that was completely set at Lake Chapala. Just as importantly, it is one of the earliest descriptions of everyday indigenous life in the region. As Dr. Wolfgang Vogt of the University of Guadalajara has pointed out, even by the 1920s (twenty years after Embree’s novel was published), virtually no-one was observing or writing about this area from an indigenous point of view. Embree’s novel has particular value since it examines the conflicts between Indians and Spaniards.

All the action in the novel takes place on and around Lake Chapala. The major locales are Mezcala Island, Chapala, Ajijic and Tizapan. Without in any way wishing to downplay Embree’s abilities with dialogue, character development and storyline, the following extracts have been chosen to highlight his depictions of landscapes.

The book opens in Chapala:

At nightfall of a day in May, 1833, there was lamentation in a fisher’s hut on the banks of the Mexican lake Chapala. The shadows of St. Michael’s hill, which rises high and rocky out of the town’s centre, had long since fallen across the Chapala plaza. The sun had set in red and gold, and the waves, as the darkness came on, were rising slowly…

They were riding over a rough trail with cacti and stones about, and here and there a flock of goats. To the right was a seemingly endless chain of mountains, to the left, more distant, rose St. Michael, low and round (behind whose bulk lay Chapala and the water), and the larger head, called Angostura, lying between that town and Ajicjic on the lake’s edge. Between Angostura and the opposite mountain chain the road led, rising to a hill, to whose summit the little army came. They looked down on the lake and, nearer, small irregular fields, scores of them, checkering a level stretch from mountains to water. Out of these, Ajicjic’s church thrust up a single gleaming tower of white. Three o’clock found the troop sweeping into the barren plaza of that fishing village.

To this day Ajicjic can claim no more than some two thousand souls. It has, even yet, no railroad, no stage; rarely has a vehicle been seen in that primitive place other than the awkward oxcart. Its low, unplastered adobe walls stand close together. The streets are alleys of extreme narrowness wherein there is mud when it rains, dust when it is dry, rocks and swine forever. Nigh every alley twists and turns, is for a block no more than a gutter, for another block a public stable for burros. Yet one may find some better quarters. The plaza, though it is only a bare, brown waste, is wide. The open court before the church, though it too is bare and dirty, with lonely, crumbling walls and pillars about it, yet has in its centre a weatherbeaten cross that speaks of service to the Lord.

The troop filled the plaza. It was halted, and the inhabitants of the town, struck with amazement, either shut themselves up or gathered in silence round about. Groups of brown children, absolutely naked, sat down in the dirt, thumbs in mouth, to wonder in comfort. Rodrigo and Bonavidas began the inquiries, prefacing them with jocularly expressed friendship to certain storekeepers and a toss of tequila here and there down a willing throat. Boats? There hadn’t come but one boat to Ajicjic the blessed day. Ajicjic was losing importance in these times. On market days everybody went to the bigger market at Chapala, where the news was dispersed. And this one boat? It had come from Tizapan with a load of wood for the lime burners.

The town of Tizapan lies at a short distance from the lake. The shore in that region is no such distinctly marked line of beach and rock as it is at Chapala. It is not even always easy to tell where the shore is. Between water and land there is a stretch of marsh for several hundred yards, watery, pierced by the spears of a million reeds that rise thick and green to a height of some feet. Here flock ducks in great numbers. The marsh is flat, bewildering, and dreary. Through its middle a stream, called the Tizapan River, cuts out more than one course, having formed a delta. The main course of this river, not over twenty yards at its widest part, usually much narrower, is navigable for canoas for half a mile to a point where the land is dry and from which the town lies yet another mile distant. The stream being crooked and the curves sharp, the progress from the open lake to the inner landing is usually made by poles. The lake approach to the town could be easily blocked by blocking the river. Only the one course is navigable. Nobody could cross the marshes. This fact was recognized more than a century ago.

The town itself is like the greater part of Mexican towns, narrow and crooked streets with the low houses (joined together) shutting those streets in and making them seem even narrower, and the central plaza of considerable size left vacant. That plaza is today filled with flowers and fruit and contains a bandstand. In former times it was bare. The mountains rise only a little way behind the town, jagged and huge. Before them is a stretch of rolling green fields. The river, coming from the peaks, dashes down through this pastoral scene with a vivacity that has laid bare a rough and rocky bed whereon the water boils till it passes through the town. At the time when the two small armies were approaching Tizapan, much of the summer green was still on field and mountain. The unclouded sun poured his light over an emerald gem of the lake’s border.

Embree, Charles Fleming. 1900. A Dream of a Throne: the Story of a Mexican Revolt.
Available from Amazon Books: Paperback

MexConnect is reader-supported. Purchases made via links on our site may, at no cost to you, earn us an affiliate commission. Learn more.
Published or Updated on: July 19, 2009 by Tony Burton © 2008
Share This:
Tagged book-reviews Lake Chapala mexico-novels Tony Burton 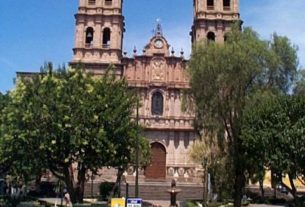