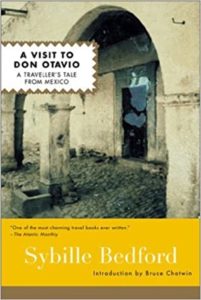 The first thing I should say about this book is that it was originally published more than half a century ago, in 1953. I mention that out front just so no reader assumes it is yet another recent travel book about Mexico.

However, it’s a good one and it’s easy to see that it merits republishing. There seem to have been new editions in 1960, 1986 and, now, here’s another, circa 2003. Evidently it never quite goes away. Also, it comes with the highest kind of praise. For example, The Atlantic Monthly’s reviewer wrote: “One of the most charming travel books ever written.” And from Bruce Chatwin: “The best travel book of the twentieth century.” In my own case I went looking for a copy after reading an enthusiastic ad for it in The New Yorker earlier this year.

One of the interesting features of the book for this reader was being able to compare what Ms. Bedford experienced in Mexico fifty years ago and what I see around me today. As you might expect, it’s a greatly changed place. And another of the pleasures of the book is that she’s such an astute observer of the world around her and a damned good writer, too.

Briefly, the author’s history is that she was born in Germany some years before the First World War. She was brought up in Italy and then shipped off to England for “a so-called education which did not take place.” Later, as a young girl in the south of France she developed an interest in literature. When World War Two came, she escaped from France and went to New York.

After the war when she was thinking of returning to France, she had the notion of first traveling south to Mexico. As she writes: “I had a great longing to move, to hear another language, eat new food, to be in a great country with a long nasty history in the past and as little present history as possible.” Thus she and a friend, Esther Murphy Arthur, who is referred to as E throughout, arrived across the border, as Bruce Chatwin notes in his introduction, “without an itinerary, without preconceptions, and with their senses wide open.”

Don Otavio was Bedford’s first published book. There were eight others during her career, including three autobiographical novels, several travel narratives and a biography of Aldous Huxley. One of the pleasures of this book is that she writes at some length about the Lake Chapala area of Mexico, which is the part of the country I’m most familiar with.

There are also quite a few passages like this account of a bus ride from Morelia to Lake Pátzcuaro.

“A well-grown sow lies heaving in the aisle. My neighbor has a live turkey hen on her lap and the bird simply cannot help it, she must partly sit on my lap, too. This is very hot. Also she keeps fluffing out her surprisingly harsh feathers. From time to time, probably to ease her own discomfort, the bird stands up. Supported on six pointed claws, one set of them on my knee, she digs her weight into us and shakes herself. Dust and lice emerge. On my other side, in the aisle, stands a little boy with a rod on which dangles a dead, though no doubt freshly caught, fish. With every lurch of the conveyance, and it is all lurches, the fish, moist but not cool, touches my arm and sometimes my averted cheek.”

There’s quite a bit more about that nightmare journey. And later, Ms Bedford tells us of another bus ride.

“Some thirty miles south of Guadalajara, we stopped by the roadside at dusk and left the bus for some refreshments laid out for us inside a patio, and on coming out again found a mildly operatic outfit fumbling with the luggage ropes: three or four men in fine hats and bandanas tied over their faces on muleback, and a pack mule.

The driver and conductor shooed us back into the patio. ‘Gentlemen, we must wait a little moment. The bandits have come.’

‘It is their hour,’ said one of the passengers.

‘Why doesn’t someone do something about them?’

‘They are armed. Armed with firearms.’

Such were the thrills of bus travel in Mexico half a century ago. Ms. Bedford reports that a few things were missing when the bandits finally loaded their pack mule and trundled off into the countryside – such as a box containing all E’s clothes plus some of the author’s notebooks and photos, although heaven knows why the bandidos would want those items.

As you might expect, the ladies visited many places in Mexico… Oaxaca, Cuernavaca, Mazatlán, Querétero, Puebla, Tuscueca, and, of course, Mexico City and Guadalajara. Altogether their journey took several months to complete.

I was surprised but San Miguel gets rather short-changed in this narrative: “San Miguel de Allende proved unrewarding. The town seemed both uncouth and arty; full of great clumsy monuments in home-made peasant gothic, and coy little bead shops. There were signs of a half-fulfilled bid for tourists; the plaza was up, and gusts of dust blowing over everything. Perhaps it was a bad week; nearly everyone I’ve talked to since said they loved the place and that it had much charm.”

The journey to visit the Don Otavio mentioned in the title takes place in the Lake Chapala area. I had trouble fixing in my mind exactly where his hacienda would have been located but I’m sure it was somewhere at the western end of the lake near Jocotopec. It’s just that there were no proper roads around the lake and the transportation on the dirt paths was usually by mule cart. Boats also seemed to play a greater part for getting around in those days.

In any event, Don Otavio was made known to them by a friend of a friend and he expressed an interest in meeting them. Hence their trip to Lake Chapala where they were made most welcome. Don Octavio lived in splendor on his estate with his seventeen servants and provided the ladies with a variety of entertainments like horse riding and canoeing on the lake, plus visits to people in the area.

Ms. Bedford doesn’t say how long they stayed with Don Otavio but it seems to have been for a good stretch of time. She isn’t the type of travel writer who gets too heavily involved in that kind of precision. However, she surely describes her travels well.

In my humble O: It’s an interesting read. And as you can see, it’s a very quotable book. I don’t know if it quite lives up to all that lavish praise from the reviewers of fifty years ago but obviously a lot of readers believe it’s worth keeping in circulation.

A visit to Don Otavio:
A Traveller’s Tale from Mexico
By Sybille Bedford
Counterpoint, 2003