When we first came to Mexico many years ago, a trip to the market was cause for both excitement and apprehension for my then ten-year-old younger daughter. There were beautiful things, like fragrant flowers and bundles of bright green herbs, as well as “yucky” things, like the heads of freshly slaughtered pigs. But one thing that would always motivate her to come and help carry bags was the promise of a piece of honeycomb from the honey vendor. Dripping with its sweet golden syrup, the honeycomb was savored until its waxy symmetry had been reduced to something resembling a wad of Chiclets.

Honey has always been a nearly universally treasured food, visually appealing, delicious to taste, and nutritionally valuable. A fluid produced by bees and derived from the nectar of flowers, it has been used to describe everything from sweetness to sensuality, and even as a metaphor for goodness. The Book of Proverbs tells us that “Pleasant words are a honeycomb, sweet to the soul and healing to the bones,” and “the land of milk and honey” described a place of rest and plenty that awaited the desert wanderers.

It was also mentioned in sacred texts of India and Egypt, and in Sumerian and Babylonian cuniform writings dating as far back as 2100 BC. It has been widely used, at various times and in diverse places, as currency, tribute and offering. It was used in Europe in food, fermented beverages, furniture polish, varnish, and for medicinal purposes.

Here in Mexico, the Maya people of the Yucatan have practiced beekeeping for thousands of years. The ancient Maya considered the stingless melliponine bee (Apidae melliponinae), native to the tropical forests of the Yucatan peninsula, to be a link to the spirit world, given to them by the bee god, Ah Muzen Cab.

Harvested from log nests, the stingless bee honey was used as a sweetener, an antibiotic, and to make the fermented honey drink called balché, a ritual alcoholic beverage similar to the European mead. Out of over 500 species of tropical stingless bees, the Maya have always favored Melipona beecheii, which they call kolil kab, meaning “royal lady.”

When Francisco Hernandez de Cordoba arrived in the Yucatan from Cuba in 1517, he found bee yards with thousands of wooden hives, producing enough honey to be traded all over Mesoamerica. Honey was of utmost importance to the culture and economy of the Maya; this is reflected in the fact that one of the four surviving Maya books, the Madrid Codex, is devoted to bees and beekeeping.

Smithsonian entomologist David Roubik points out that the stingless bee, rather than non-native species, has been essential to the pollination of tropical forest plants, and when the bee is in peril, so is the local ecology. He and his colleagues have produced instructional material in Spanish and Maya languages to promote the propagation of stingless bees, thereby building up a breeding stock to be reintroduced into the wild.

The Mexican states of Yucatan, Campeche and Quintana Roo have remained the most important producers of honey in Mexico, which up until thirty years ago was the world’s leading exporter of honey. It has since been overtaken by China and Argentina, though Mexico continues to export some of the most highly sought after honey on the international market. Although a whopping 40% of all honey produced in the country comes from the Yucatan peninsula, the states of Jalisco, Puebla, Oaxaca and Chiapas also produce significant amounts. Regional production has made for some distinctive Mexican honeys, such as the honey from Michoacan’s abundant avocado blossoms.

In addition to its use as a sweetener, honey has been recognized for centuries as having health benefits, although only in recent times has its nutritional value been analyzed. Besides the sucrose and glucose that make it sweet, honey contains magnesium, potassium, calcium, iron, and vitamins B1 through B8. People who suffer from allergies are advised to eat local honey, thus building up immunity to reactions to local plants. Honey also has antimicrobial and anti-inflammatory properties, soothing sore throats, burns and even ulcers. It also makes a good moisturizing mask for the complexion. (However, even with all of its health benefits, honey should not be given to babies under one year of age. This is because it can carry ordinarily benign botulism spores that cannot be tolerated by immature digestive symptoms.)

Honey has so little sodium that it is considered a sodium-free food, and besides the vitamin and mineral content, it also contains proteins. The level of nutrients in honey varies depending upon the source plant. The Kabi Lol organization in Quintana Roo has been instrumental in setting up a model for the production of organic honey made from the flowers of pesticide free plants.

When buying honey, check the label to make sure it is not adulterated with corn syrup or other sugars. Both the U.S. and Mexico, as well as many other countries, require all contents to be listed on the label. Whether buying honey sold in a labeled jar or buying from the honey vendors at the market, there are a couple of simple tests that you can do to determine the purity of honey.

The first is to simply drop a spoonful of honey into a glass of water. Pure honey will remain in a ball, while adulterated honey will dissolve. Another method is to dip a cotton candle wick in honey and light a match to it. If the substance burns, it is pure honey, and if not, it is adulterated.

Honey can be safely stored at room temperature and some honey may crystallize. This does not necessarily mean it is not pure honey, and setting it in a pan of hot water will restore it to liquid consistency.

In the Mexican kitchen, honey is used in a variety of dishes, most notably the morning plate of fruit, which is invariably topped with honey and yogurt. It is also used in a bundt-like cake called rosca de miel, usually made with orange blossom honey, although any pure honey can be used.

Honey and lime juice are a good combination drizzled over grilled fruit such as pineapple or peaches, and honey is the classic topping for the Mexican fry bread called sopaipillas. Honey is delicious in flan instead of sugar, especially in flan flavored with orange, vanilla or cinnamon. And as a dessert liqueur, try Xtabentun, made from the honey of stingless bees.

Honey is not only good in desserts, but also complements savory foods in the Mexican kitchen, partnering well with smoky, dried red chiles. A good glaze for poultry is made with ancho or chipotle chiles combined with honey, and a sauce for roast chicken or pork uses chiles, honey and cilantro. These, plus a couple of Mexican honey dessert recipes, are given below. 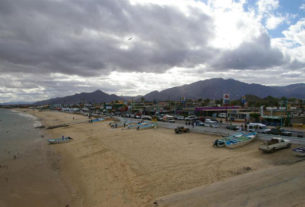 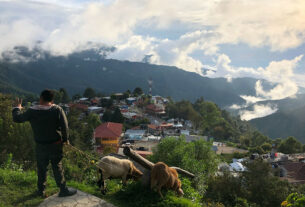