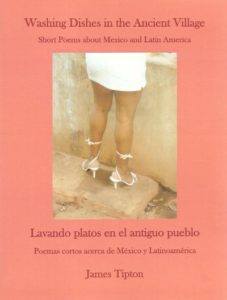 Washing Dishes in the Ancient Village / Lavando platos en el antiguo pueblo is a collection of one-hundred short poems about Mexico and Latin America. Because I wrote this book, I do not intend to review it here but rather to recount some of the experiences I had while writing this little book.

I have been wandering around Mexico and Latin America a long time. I live in Chapala, Jalisco, Mexico, with my Mexican wife, Martha, and our daughter, Gabriela. Over the decades I have published hundreds of poems and dozens of short stories – many of them set in Mexico and some of which you may have read in the pages of MexConnect.

All of the poems in Washing Dishes in the Ancient Village  /Lavando platos en el antiguo pueblo have been written these past five years, during which we have been living in Puerto Vallarta, then Ajijic, and now Chapala, which has indeed become home. Some of the poems are clearly Mexican in setting:

The way she chops coconuts
that woman with the old machete
must still be single.

Others, although written here in Mexico, are about experiences that might have happened elsewhere but did happen in Mexico and Latin America:

Just before mass she made love
and now she refuses
the sacraments.

That happy couple –
even on vacations
they are never together.

Although some informed readers may look at these three-line poems and assume they are haiku, I do not call them haiku, because they are more personal and more earthy. As Robert Kleffel pointed out in his recent review of this book in El Ojo del Lago, if these are haiku, they are “haiku on testosterone.”

In that same review, Kleffel writes: “Direct and simple, often humorous, often thoughtful, these short poems ‘wake us up,’ make us more aware of each other and of Mexico and Latin America. Many of the poems are sensual, about love and its joys and confusions.”

A couple of those:

I tried hard to be a monk
but whenever I remembered you
I forgot about God.

A little over a year ago, I was searching for a title to pull these short poems together. It was New Year’s Morning. I was sitting at the open door of Martha’s family home in a little coastal village just north of Guayabitos on the Pacific Coast. Martha and her sisters and brothers grew up in this ejido community. They grew up with dirt floors and a thatched roof… rather idyllic circumstances to those of us who were born romantics.

Those brothers and sisters have all left, but this particularly morning Martha and her sisters were back home, the children were already playing in the dusty streets, and I was sitting sipping coffee as her sister Enedina stepped out to wash dishes in the cold water of the worn concrete tank immediately behind the house. Enedina now lives in Puerto Vallarta, loves some style in her life, and she greeted that first morning of the new year in her short white dress and white high heeled shoes – probably the only woman in the village who was wearing high heeled shoes that morning.

Because the kitchen has no running water, Enedina was washing dishes the way women in Mexico have washed dishes for centuries upon centuries. I sat there admiring her lovely legs but also thinking about how that scene at the water tank captured the ancient Mexico and the modern Mexico, both wrapped around each other, and when I snapped the photo, I realized that in some sense those poems I had been working on so long were like “washing dishes in the ancient village.”

When I finished the collection, I began to translate them into Spanish, but soon my Mexican wife and her friend Gabriela Ocampo Ocampo (who is on the cover of another recent collection of my short poems, Proposing to the Woman in the Rear View Mirror, available at www.modernenglishtankapress.com) took over this task.

I teach English to my Mexican neighbors each Wednesday afternoon (or should I say we teach each other our languages) and soon they also were involved in the project, listening carefully to the Spanish translations and letting me know both which ones were successful and which ones were not. Those friends are Carlos Garibay, Bernardo Picazo and Yolanda Tripp and their daughter Ilsa Picazo, and Jahel Reynoso. Still another friend, Zofia Barisas, who has lived in Mexico almost three decades and who is fluent in both English and Spanish, checked each translation a final time.

In his review, Robert Kleffel notes that “This book is for people that think that they don’t like poetry, think that it is boring and difficult to understand.” I liked that comment because I really try to write for everyone.

Kleffel adds, “Carry this book with you… and be sure to share it with your Mexican friends.”

Available in the U.S. from:

and in Mexico from:

The Slow Food Movement in Mexico

House in the Sun by Dane Chandos