Como pan caliente – “like hot bread”- is the expression used in Mexico to indicate something that is popular, best selling, or in demand. And indeed, going for hot bread is one of the daily culinary routines in households throughout the country. Everyone knows what time the bread comes out of the neighborhood bakery oven and gets stacked on the large trays which line the walls, and a family member is dispatched on this appetizing errand before the bread is sold out.

It is difficult to pass a bakery without entering as the aroma of freshly baked bolillos (French rolls) and pan dulce (sweet bread) wafts into the street. Once inside, just pick up a tray and a pair of tongs, peruse the staggering assortment available even in a small bakery, and before you know it, you’ll have a stack of more bread, rolls and cookies than you can possibly consume. But please share them with friends or neighbors. Remeber that Mexican bakeries do not use preservatives and the bread should be eaten within a day or two.

The Mexicans have named their baked goods as whimsically as the Italians have named their pastas. Conchas (shells), orejas (ears), cuernos (horns), and cochinitos (little pigs) are only a few favorites. Care to try something different? How about bigotes (moustaches), trenzas (braids), or corbatas (neckties.) For the more adventurous, there are the somewhat aggressively named picones (jabbers) and piedras (stones.) The bread situation in Mexico, however, was not always so varied and appealing.

From amaranth idols to French pastries

One of the first non-native foods introduced into New Spain by the conquerors was wheat, a Spanish staple and religious necessity, the only grain recognized by the Catholic church as being suitable for the Eucharist wafer. Many a friar was dismayed to find the Indians shaping amaranth into idols to be eaten for communion, and a drive to replace native grains with wheat was soon underway.

The first bread produced in Mexico was a less-than-inspired, tasteless lump which, the Spaniards were shocked to find, they couldn’t even give away to beggars. Juan Suarez de Peralta, quoted in One Aspect of Mexican History, explained to his countrymen back in Spain that “destitute natives would not think of accepting bread…they shove it back in your face.”

But whether they liked wheat bread or not, indigenous people labored on the wheat farms that provided bread for the colonists, and gradually began eating it out of necessity, since it was part of their pay. Criminals often served sentences of eight to ten years kneading dough, and colonial bakers had reputations for bawdy behavior which gave rise to a whole genre of songs and dances about their antics, composed and played by street musicians.

One inventive viceroy, however, started a practice which would change the way people viewed bread. He dipped it in chocolate as he ate it, a custom which quickly caught on and gave people a taste for something a bit more palatable in the bread department. This wish was amply fulfilled by the French influence that took hold of Mexico at the end of the Viceregency.

The 1800’s saw the country inundated with French bakeries, and Mexicans soon developed a fondness for crispy baguettes and rich pastries.The French were defeated in 1862, but left behind a legacy of taste for delicious baked goods, making the Mexican baking tradition one of the most inventive in the world. Estimates of the number of types of breads produced by Mexican bakers number between five hundred and two thousand different varieties.

Recently, I had the opportunity of visiting one practitioner of this baking tradition. Señor Jose Dominguez, known by friends and clients as Don Pepe, has been baking bread since he was eight years old, apprenticing in his father’s bakery in the town of Cholula, Puebla. His father had learned from his uncles before him, and started young Pepe literally from the ground up: his job was to gather the wood for the oven fire, start the fire and, with lots of practice, maintain the oven at the correct temperature.

Don Pepe still uses the traditional brick oven and wood fire method for baking bread. He is an advocate of preserving as many traditions as possible, and was one of the founders of the Cholula Bread Fair, an annual autumn event during which a huge brick oven is constructed in the main plaza, bread-making demonstrations given and fresh bread sold by the local participating bakeries.

Don Pepe’s bakery, “La Chiquita”, is small, as its name implies, but its oven is not. Measuring five meters in diameter, and with a boveda (an arched stone roof) it holds hundreds of rolls and sweetbreads. The day I was there, Don Pepe and two of his neices whipped out three hundred bolillos within an hour after the dough had risen, with movements so quick and deft that it took me about fifty bolillos to get the hang of it.

They monitored the oven temperature (it requires about two hours of fire to reach the proper degree of heat) and determined its suitability for baking by checking to see that the curved roof was covered with a corona (a “crown” of ash) then by throwing a handful of flour onto the oven floor and observing whether it burned too quickly or became a toasty golden shade. The master baker can tell the temperature of the oven just by holding his arm in the oven. After one of these daring tests, he informed me that the temperature was now 180º centigrade (about 360º Farenheit) and it was time to put in the first batch of bread. This is done with a long, narrow wooden paddle (pala de apilar) which permits a symmetrical row of bread to enter the oven. A quick, practiced flick of the wrist and the paddle is withdrawn, leaving the rows of bread to be retrieved when done by a wider paddle, la pala ancha.

The mouth-watering fragrance eminating from the oven was soon floating out to the street as the piping hot bread was emptied from paddles into large baskets and the sweet rolls onto trays. Customers, who earlier had begun poking their heads in the door to check on progress, now reached for tongs and started loading their trays with pan caliente.

You don’t need a brick oven and a wood fire to make delicious Mexican bread like Don Pepe’s. Just follow the recipes below, which he was kind enough to share, and make some holiday treats to warm hearts and tummies. 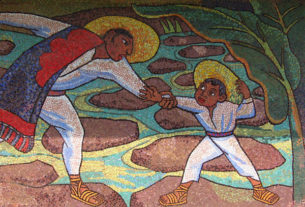