There have been times when I step into a house and immediately know there is a problem. Other than the obvious puddle of water on the floor, the smell of humidity and efflorescence on the walls – all of which has happened in the last month – there are other subtle signs of how a house will perform during the rainy season even before the rains begin to fall.

Yes, the elevation of the house and how the surrounding gardens and street are graded can affect the quality of your home.

What would happen to your house should normal drainage patterns for the rainwater be changed due to construction, garbage on the street or even a heavier than normal rainfall?

One home I was in last month was built at grade. I mean that as you walked into the house, there were no steps. And in that case, there were no ramping or inclination at or in front of the doorway entrance.  It was level with the outside. Unfortunately, the normal backyard drain had been clogged with garden debris and caused the small backyard to fill with water until it was flowing under the doorway and into the house. In an effort to provide ease of entrance, this builder had not taken the effect of a heavy rainfall into consideration when designing the house.

Another sure sign of potential problems in Mexico real estate is when I step down into a house. This would mean the floor level is lower than the surrounding grade. Many homes have this design element to accommodate the slope of the overall lot with a rear garden lower than the entrance side or upper end of the lot. There is no problem as long as grading and drainage have been considered, and as long as the rainwater falling off the roof has been directed away from the house and hopefully out to the street.

With Lake Chapala real estate, our homes are different from those in Guadalajara in terms of rainwater drainage. In Guadalajara, excessive rainfall from your roof and your backyard needs to be directed to underground drywells (pozos de absorción) to help minimize flooding in the streets. Here at Lake Chapala, the communities allow you to drain your rainwater to the street. In both municipalities, you are not allowed to drain your rainwater into the septic or sewer system. All streets in the Lake Chapala region lead to the lake, and there is not the need to drain to a “pozo” however, you could in the case of a backyard that is lower than the street level, use the underground drywell to handle excessive rainwater accumulating on the ground surface.

It should also be noted, that in accordance with the Civil Code of the State of Jalisco (and similarly across all of North and South America), you cannot drain from your property onto a neighboring property. In some cases I have seen roof drains leading onto a neighboring property whether it be onto an adjacent rooftop or into a garden. These drainage issues technically are illegal, since the rainwater could cause damage to the gardens or construction of the receiving property. It usually is not a problem until someone complains, however the person that is receiving his neighbor’s drainage is within his rights to stop the drainage onto his property or at least request the problem be resolved by the offending neighbor.

Also take care where the downspouts drain from your roof. There have been houses with roof drains pouring onto the lower garden. However when this happens, the rainwater cannot drain away from the house due to poor grading of the garden. In addition, the rainwater continuously soaks the foundations below the house, causing further consolidation of the soil below the foundation and leading to uneven settlement of the foundations and potentially structural cracks and damage to the house.

(J. Brad Grieve is a professional civil engineer and has lived and worked in the Lake Chapala area since 1994. He is the owner and sole proprietor of Ajijic Home Inspections. You can reach him at 52 376 766-2836 or through his website.) 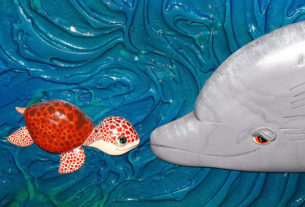