Short ribs are both tasty and economical, but many people shy away from them because of their long cooking time. Mexican cooks frequently use pressure cookers for tougher cuts of meat, usually with tender, tasty results. I recently purchased a safety pressure cooker  (olla express) manufactured in Spain by the MAN Company, which makes two models, Rapid Express and Splendid, both sold in Mexico and the U.S. It replaces the older (and somewhat scary) model I used for years to cook beans and produces good results with inexpensive cuts of meat. This dish uses the common Mexican technique of cooking the meat or poultry first and then using its broth to make a chile sauce or a mole.

Season the meat to taste with salt and pepper. Heat vegetable oil in a large Dutch oven, stockpot, or pressure cooker. Brown the short ribs on both sides, taking care not to crowd the pot. If necessary, do several batches. Return all short ribs to the pot, along with the garlic, onion, salt to taste and water to cover.

If using a pressure cooker, place the lid on the pot and seal it, setting the pressure to the highest setting. When steam starts to be released from pressure cooker, lower the heat and continue to cook for 30 minutes. Turn off the heat and allow the pressure to drop naturally. If using a regular Dutch oven or stockpot, bring the water to a boil, lower heat, and cook, covered, until the meat is tender, about1 ½ hours. Strain and reserve the broth and set the ribs aside, covered. Discard the onion and garlic from the broth.

On a comal or dry skillet, roast the tomatoes, onion and garlic until lightly charred on all sides. Peel the garlic cloves. (In Central Mexico, cooks often leave the charred peel on the tomatoes, which adds a nice, smoky depth of flavor, but peel them if you wish.)

Place the tomatoes, garlic, onion, drained chiles and cumin in the blender with 1 cup of the reserved meat broth and puree. Pass the puree through a food mill or fine mesh strainer. If using a strainer, push with a wooden spoon to get as much of the puree as possible.

Heat the oil in a large pot and fry the puree. Add 4 cups of the reserved broth a little at a time and cook until the sauce reaches the desired consistency. Add the spareribs and salt to taste and continue cooking for 20 minutes longer.

Serve the ribs in a deep plate with plenty of sauce, accompanied by warm tortillas. Serves 6. 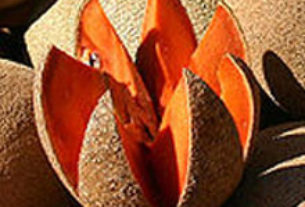 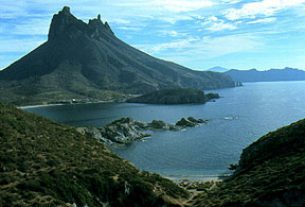