An earlier column described several Guinness records and their connection to Mexico and Mexicans. This month’s column examines four more very different Guinness records which do not involve quite as much physical activity.

In movie images, Mexico is almost invariably associated with cacti and it should, therefore, come as no surprise to find that the world’s tallest cactus is believed to be one growing in the Sonoran Desert in Baja California. Recorded and measured by Marc Salak and Jeff Brown in April 1995, it is a cardon cactus ( Pachycereus pringlei) which towers a mind-boggling 19.2 meters (63 feet) above the desert floor – higher than most two story buildings!

The cardon is a close relative of the saguaro cactus of Arizona. It has numerous long, straight, vertical arms which branch off the main trunk close to the base. A specimen as large as the world record holder may be 200 years old. Salak is convinced that this huge cactus is still growing, perhaps by several inches a year. He also believes that there’s likely to be an even bigger one somewhere out there in the desert…

Turning from deserts to desserts, the height of the largest cactus is dwarfed by the length of the largest coconut candy ever made. At the Coconut Festival, held in Tecolutla in the state of Veracruz, on February 28, 1998, 140 people slaved away for several hours turning 4,000 coconuts into a massive coconut candy. When complete it measured a whopping 140.14 meters (459 feet 9 inches) from end to end. Tecolutla is a laid-back, somewhat decadent beach resort on the Gulf coast of Mexico. The first Coconut Festival was held there in 1995.

While on the subject of turning a myriad of relatively small objects into one single giant-sized delight, how about visiting the campus of the National University in Mexico City for a moment to admire the world’s largest mosaic mural? Adorning the walls of the central library of U.N.A.M. are scenes depicting Mexican history. The total area of mosaics is 4,000 square meters (43,055 square feet). The artist responsible for the mural, made of stones and glass, is Juan O’Gorman. The mural took two years to complete and covers all four walls of the library. The north side shows the pre-Hispanic cultures, the south the conquest of Mexico. Social struggles are represented on the east side and the university shield on the west side.

And the Irish connection suggested by the name “O’Gorman”? Juan was the eldest son of an Irish father and a Mexican mother. Born in Mexico City in 1905, he became an accomplished architect, as well as an artist. Many of his murals can still be seen. One of the most colorful is that in Patzcuaro public library depicting the history of the state of Michoacán. One of the many curiosities about this mural is that it includes portraits of Mussolini and Hitler. Their role in Michoacán history remains somewhat elusive…

For our final record, we turn from one university campus, and one art form, to another. Just as amazing, in its own way, as the mosaic, is the ephemeral performance art, for want of a better term, created by students of the Querétaro campus of the Tec. de Monterrey (ITESM) in August 1999. Working over two days, they established a new world record for the longest washing line, which, incidentally, has to have freshly-washed clothes hung from it. Fortunately, Proctor and Gamble sponsored the students’ attempt, providing ample supplies of brand-name detergents Downy and Ariel. By the time the students tired of wringing out wet clothes, the line was fully 24.165 kilometers (15.02 miles) long!

Doing this in the middle of central Mexico’s rainy season was perhaps not the smartest move, since many clothes had to be rehung after being blown off the line by strong winds. In case you’re wondering about the nightmare logistics that would be involved in taking the washing down, identifying the correct owners, folding and ironing, the students had a much better idea. They donated all the clothes they’d washed to the benefit of more than 23,000 local needy families. 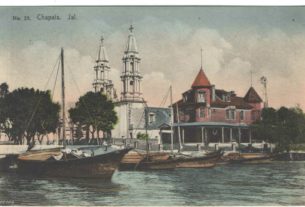