Photo Gallery: Bringing our sailboat to the Maya Riviera 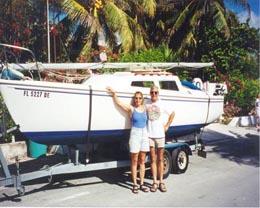 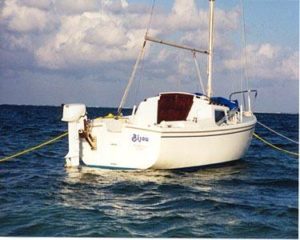 This is a story of how my wife, Teresa, and I realized our dream of owning a sailboat here on the Caribbean side of Mexico. Being former coastal Californians with 10 years of sailing experience under our lifejackets and now living on the Caribbean coastline of the Yucatan Peninsula, we wanted a sailboat at our home in Puerto Morelos.

We literally scoured the entire Yucatan Peninsula from Cancun to Chetumal in search of a boat, but found very few that fitted our needs and criteria. The ones we did consider were either very expensive or extremely neglected — and very expensive as well. As we discovered, most of the sailboats in Mexico have been brought into the country by ex-pats, or Mexicans willing to pay import taxes, which can run as high as 30% of the value of the vessel. We now realize why used boats fetch such premium prices in Mexico.

Disappointed but undaunted, we continued our quest. Ah, but there must be thousands of acceptable sailboats in the Miami, Florida area, we thought. Let’s fly to Miami and look around. It was the day after Christmas 1999, when, with determination in our hearts, we were on a flight to Miami.

Our criteria for a used sailboat were: 21-25 feet in length, a retractable keel (for navigating the reef), an older boat with wood trim, no major damage, a price range of between $2500 – $5,000 and, of course, a trailer.

Were we ever surprised! Not only was there not an abundance of used sailboats in Miami but the ones we did look at were either very expensive or had been extremely neglected and were still expensive. Déjà vu.

While I drove the rental car north along the Atlantic coastline from Miami, Teresa diligently scoured every sailboat ad in every “Boats For Sale” publication we had picked up at Mini Marts along the way. By now she had quite a stack of them in her lap. “Oh look, Honey, here’s a sailing school in Stuart, that sells used sailboats,” she said. “Great, let’s check ‘em out,” I replied.

We arrived at Chapman’s School Of Seamanship around 1 PM in a light drizzle. As we learned, Chapman’s was a non-profit organization that raised money for the school by selling used sailboats donated by their previous owners. “Wow, look at all these sailboats,” I exclaimed. There must have been at least 80 vessels for sale. I could hardly contain my excitement. A closer inspection revealed that most of these donated boats had either been very neglected or were over-priced. Here we go again. Then, Terry called out, “This one’s kinda cute.”

She was looking at a Catalina 22, which I knew was a great, well-made boat. Upon closer inspection, we discovered that the boat was not only dry inside (no leaks anywhere!) but all of the cushions, two bags of sails and a Porta-Pottie were all in excellent original condition. The interior was trimmed in teak, as was the companionway leading into the cabin. A closer look at the storage compartments revealed a small propane coffee maker, an anchor, extra ropes, a swim ladder and a small outboard motor!

All the boat needed was a good home and new owners that would give her the TLC she deserved. We sat there for a moment looking into each other’s eyes, mutually knowing without speaking a word that this was THE boat.

With excitement and anticipation, we headed for the school’s office to find out the price and learn the boat’s history. Looking up from an inventory list on her desk, the manager said, “We just got that boat in yesterday; haven’t had a chance to price her yet. How about $1700?” Knowing that a good condition Catalina 22 should sell for somewhere around $5,000, I swallowed hard and replied, “Uh, yes, that sounds like a fair price.” We later learned that the boat had been in the hands the original owner since new, some 20 years ago. What a find!

We had two days left before our return flight to Cancun. We had to arrange for the boat to be prepared for shipping from Florida to the Yucatan, make arrangements with the shipping company, change title and registration, find someone who could modify a power boat trailer to accommodate a sailboat, and shop for odds and ends that we wanted to buy for the boat.

Chapman’s School Of Seamanship was a tremendous help. They sent us over to talk to “Crusty Jack,” an old salt who had lived in the area most of his life and could handle any boating related problems that could arise. We told him we had just bought a sailboat and needed it shipped to Mexico. “Mexico?” he countered. “That’s right and we’ve only got two days to arrange everything,” I replied. “No problem,” he said. Jack towed our new purchase back to his dock, hoisted her out of the estuary and placed her temporarily on the trailer we had found. Terry and I enthusiastically went to the Florida State Department of Motor Vehicles and took care of the title and registration. They were very understanding of our time frame and processed all of the paper work while we waited!

Jack and his helper spent the day power washing the boat’s hull, removing several years of marine growth and building temporary supports on the trailer to accommodate the boat for shipping. Terry and I visited a wonderful store for boat parts and accessories, West Marine, and bought a few trimmings for our new “baby.”

Back in our hotel room, we made a call to the shipping company in Port Everglades. It turned out that they routinely ship to Puerto Morelos and the boat would not be a problem. She would arrive two days after we got back. The Mayan gods must have been on our side.

The next morning we arrived at Jack’s, paid him for all he had done and what he was about to do — transport the boat south to Port Everglades in Fort Lauderdale, for shipping to Mexico, while we caught our plane back to Cancun. We were exhausted, elated and filled with excitement as we returned home to await the arrival of our baby.

We have fond memories of ol’ “Crusty Jack.” You’ve got to have a lot of respect for a man in his seventies who stopped everything he was doing to take on the challenge of fitting a sailboat to an unsuitable trailer and then towing it 120 miles to port for shipping, all in two days. A real hero in our eyes!

The view from our second story verandah affords a wonderful panoramic vista of the Caribbean. Nearly a week had passed since we bought “Bijou” and returned home. I was scanning the horizon of the Caribbean with binoculars when I spotted “The Hybur Trader” from Florida. I yelled, “Terry, here it comes, here it comes!” We headed to the port and waited diligently on the docks as “The Hybur Trader” was securely tied up. The unloading began and we waited patiently until they were able to get to “Bijou”. Most of the cargo on the ship was containerized, out of sight. However, “Bijou”, on her trailer, was strapped down to a platform. We could see her from the dock, much like kids who spot their presents under the tree when they come downstairs on Christmas morning. There I was, a 50-year-old man, jumping wildly up and down with excitement. The crane swung her precariously around 40 feet in the air and lowered her onto a waiting truck for a piggyback ride to the customs holding area.

Our next endeavor was to clear customs and get a use permit. Having FM-3 visas made the job much easier. Customs asked for copies of the Florida title and registration to the boat AND trailer, and copies of our FM-3’s. We asked for a “Permite para solo uso personal” (Permit for personal use only). If you plan on making money giving tourists rides then it’s a whole different soccer game. The entire process took barely an hour, and we were granted a permit valid for 10 years. No fees! Gratis, nada.

The next step was to see the Capitania de Puerto (Port Captain) of Puerto Morelos. Since we would be using our boat in his jurisdiction, it was necessary to register with him. His office wanted the same copies as customs did, plus six photos of the boat and they needed to physically see the boat to verify it’s authenticity. No problema. We were granted a provisional use permit by the Port Captain and I cheerfully bought everyone in the office an ice cold Coke. Salud!

As we were launching “Bijou” from the boat ramp at Los Pelicanos Restaurant, we realized the water depth was too low for the boat to float free from the trailer. We recruited five Mexicans to help me push from the front, while a fishing boat pulled from the stern. Once “Bijou” was launched and tied securely to the dock, we enjoyed a well-deserved cerveza at Los Pelicanos. Now the time had come to take “Bijou” to her mooring located across the street just off the beach from the footpath which leads to our home, Cabanas Puerto Morelos. We had made arrangements with a local fisherman to make a cement mooring the day we returned from Florida so that everything would be ready for “Bijou’s” arrival.

With the wind blowing strong out of the north, I decided it would be best if we motored there. “Bijou” seemed to smile approvingly as we approached the new white buoy that marked the mooring. And so she sits, shining and proud, waiting for the time we take her sailing.

Having our own mooring is special to us. There are several moorings that pepper the beach, but most of them belong to the local fishermen and snorkel guides. There is no public marina in the area, so every boat owner needs to make his own mooring. Recreational boating in this area has not yet reached the proportion of places such as Matzatlan or Puerto Vallarta. Bijou has only been in the water for a month, so we haven’t ventured out very far. We mostly sail 200 to 300 yards offshore and three or four miles north or south. The best time of day for us is late afternoon, as the sun slowly makes its way down over the jungle. Magnificent colors of red and orange fill the sky as we come about and head back.

We have confidence in the system here. You just have to be willing to smile a lot, follow their rules and regulations, buy a few Cokes here and there, and you’ll find you can overcome the obstacles and make some new friends at the same time. So, dream on amigos, dream on. You, too, can have a boat in Mexico. 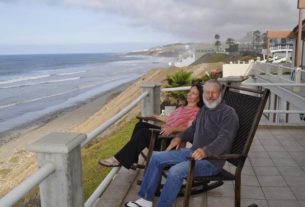