In Mexico on the first two days of November, the dead are remembered in a very special celebration which is one of the most hallowed traditions in the Mexican culture.

Each year, a series of unique events are held in several parts of the country to commemorate family members who have passed away. In the area of Tlahuac, for instance, the little town of Mixquic holds one of the most outstanding and emotional celebrations on the day of dead.

Preparation for the festivity begins towards the end of October, when the relatives of the dead work on the particular offerings they will give to the souls of the departed. By the first of November, the altars at the former homes of the dead will display images of patron saints, photographs of those in the family who have dead, flowers, fruits, ”pan de muerto” (bread of the dead), sugar skulls, and the favorite foods of the treasured relatives who are now gone. A candle is lit for every soul. Then, as the tradition teaches, when the sun passes through the zenith, all the souls return to town and to their old homes, to which they are guided by the aroma of their favorite dishes. To make their brief visit even more pleasant, the souls of children are offered toys, while the elderly there is ”pulque” or ”aguardiente” (traditional alcoholic beverage from the Mexican countryside).

Throughout the first two days of November, all the doors of the house remain open, to encourage visitors from all over town to participate in the celebration and to visit the family shrine. On the afternoon of the first, a coffin containing a white cardboard skeleton is carried through the streets of the town. As it passes by, women dressed in black and holding lit candles cry in sympathy. The entourage travels the streets, asking permission to enter the homes of the celebrants. Once inside, the casket is laid on the floor, and everyone kneels around it to give the prayer, ”Our Father”. After the prayer, the owner of the home gives bread or sugar skulls as a farewell. The procession ends at the local cemetery, where a funeral is simulated.

In Mixquic, the bells from the old Augustian Convent ring at 4 PM on the second day of November, calling for a procession to the cemetery. The people come silently from their homes, carrying bundles of gladiolas, cempasuchil (the traditional flower of the Day of the Dead), and candles in hand. The men, women, and children sweep and wash the graves, then cover them with petals of the flowers they carry. They light their candles, they burn copal and incense, and they pray.

By midnight of the second, all the graves are lit by hundreds of candles which shine on the faces of those who have gathered. In the sounds of whispering and sobbing, a link is renewed between those alive and their loved ones who have died. The following article is reproduced with the kind permission of the Consul General in Austin Texas. (It first appeared in their newsletter, October 1996 – Austin, Texas – Year IV, Number 25) 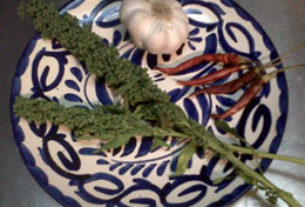 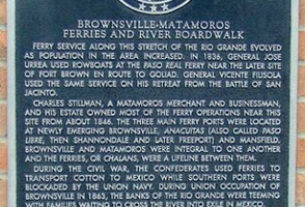 The Brownsville-Matamoros Ferry: crossing the Rio Grande from 1818 to 1929