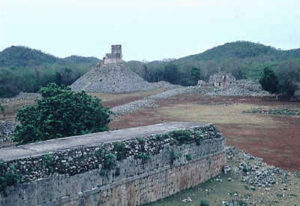 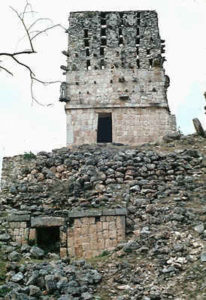 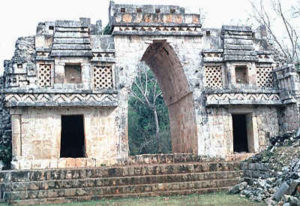 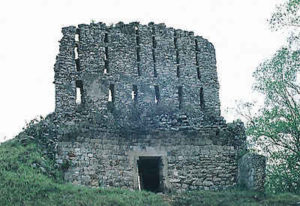 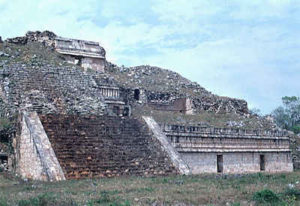 For the thousandth time, the automobile was stuck in the road. Damn! Things were much worse than we’d imagined. I opened the car door and stepped down to see how to get us out from the hole in which we had fallen. Not without difficulty, my wife and I managed to find enough rocks to fill the monstrous pothole. We moved on again.

It took us more than two hours to crawl over the less than 10 kilometer dirt road between Kabah, located on the Highway of the Pyramids that connect Campeche to Mérida, and the ancient city of Sayil. The narrow and deteriorated road crept through the Yucatecan jungle, leading us to our final destination: the ceremonial centre of Labná, a few kilometers beyond Sayil.

We stopped to pay our respects to old Sayil, of course. We visited the ruins of the great Palace and stopped to read the Maya long count dates on the finely engraved commemorative limestone estelas. But the day was coming to and end, and we wanted to arrive at Labná. We returned to the torture of the infamous dirt road.

After a seemingly endless time we finally arrived at the Maya city of Labná. The first thing we saw when we stepped down from the car was, of course, the great Maya arch at the entrance. We immediately forgot about the hardships and dangers suffered along the fastidious drive through the jungle. Now with the afternoon light, the limestone of the vault shone with the soft colors lent by the light that was about to leave.

We walked along the ceremonial esplanade to the Palace of the Columns to climb the many steps of its staircase to the top. Up there we saw the mouth of the well that opens down to the chultún, a rain water reservoir, located below the edifice. A rudimentary mechanism told us that the well was still in use. Surrounded by the afternoon silence, immersed in the green sea of the jungle, we found ourselves transported to a long gone epoch; to a time when days were happier for the Maya constructors of the Puuc region.

A boy came up to greet us. We appreciated his Maya features, deep black hair and eyes, these last shaped as almonds, in the fashion of the people from the Far East. He said, “You have to pay for your visitor tickets.” We gave him the two pesos he asked us for, to receive in return two small pieces of paper with the seal of the government Institute which suppossedly takes care of Archeological sites in Mexico stamped on them. “And, do you live here?”, we asked him. He answered in his musical Spanish that he lived with his family in the little house at the entrance. He then pointed a finger to a spot located at the edge of the jungle, “Did you see the building over there?” My wife answered, “We just passed by over there and we didn’t see any building.” He started to climb down the stairs and said, “Come.”

We followed him down to the very boundary of the jungle, not seeing a trace of a building. Then we advanced a couple of meters inside the dense forest to stumble upon a magnificent edifice decorated in Puuc style, covered with little columns, masks, intrincate designs and adornments shaped as lacing and knots carved in limestone. A marvel hidden behind trees and bushes! We’d never have seen it if the Mayan kid hadn’t been there to lead us to it.

When we finished our visit, we came back to the great ceremonial esplanade of Labná. A persistent and cool breeze was blowing and that, along with the image of the boy, made me walk back to the car to fetch a couple of kites from among the handful I always carry in the trunk.

In a minute, I had a nice multicolored box kite floating over the esplanade, and in two minutes, our friend of the tickets and two of his brothers were right there with us. ” Papagallo!“, they repeated, open-mouthed, their heads turned up to the clear sky. “How beautiful!” I passed the kite line to one of them, who took it in his hands with a look of responsibility in his eyes similar to that of a President taking oath before Congress.

I had to fly more than one kite, because everybody wanted to have his own. When we had three of them dancing in the wind, the father of the children came by to join us. Before even saying buenas tardes, he muttered, eyes lost in the blue yonder, “Beautiful papagallos. They fly so well!” He ended up with a string in his hand, of course. And after a while, his wife came to join us in our playing.

And then somebody started to yell, “Chukla! Chukla!” My wife and I looked at each other, not knowing what was going on. Jacinto, the head of the family, explained to us, “Chukla in la maya means, to hurry.” He took the end of one of the kite lines and tied it to a handful of grass that one of the kids had cut nearby. Suddenly, he let the line go. Everybody ran after the bouncing bundle, dragged along by the force of the wind, to retrieve the end of the kite string. “Chukla is to hurry, see?”, repeated Jacinto.

In that agreeable manner we spent the rest of the afternoon, until it was dark. When we brought our kites down, I took my best delta wing, a red cloth beauty with a white dove sewed onto it by my wife, and handed it over to the eldest child. That sealed our friendship. We were invited to dine with them that very moment.

We spent some time putting the car in order, and then we walked the short distance to the house of our new friends. We sat on the porch, while the lady of the house prepared tortillas, frijoles and venison steaks for dinner. Chatting with Jacinto and his children, I noticed some anxiety in the face of our host. I asked him, “Is anything wrong?” Jacinto answered me with a little embarrassment, “Well, no. But, are you not going to take a bath?” Marta my wife and I looked at each other, not knowing what to respond. “Water is ready”, said Jacinto, and at the same time he stood up to lead us to the bathroom.

We took a bath with warm water from a bucket and good soap, watched by a purple hen that spent its time laying eggs in front of us. We talked about the well known fact: the Maya are amongst the cleanest people on earth. This time, when we came back to the porch, we noticed that everybody had taken a bath and changed clothes before we did.

Jacinto’s wife, beautiful in her white and brilliantly embroidered Maya hipil, called us to dinner. We had fresh hand made tortillas cooked on a barro comal over a coal fire, charcoal broiled venison steaks, the best refried frijoles I’ve ever tasted, and a stupendous salsa made with locally grown habanero chiles. We washed everything down with a refreshing drink made of cold water, sour orange juice, and a bit of sugar. Never in my life, not in any restaurant nor house, castle nor mansion have I dined like I did on that evening, surrounded by the warmth and closeness of that united Mayan family, with the company of my good wife, and enjoying a delicious dinner a few meters from ancient Labná.

Conversation dealt with kites and games for a while, until we fell into the inevitable subject of the dormant ruins outside. Our hosts were acutely aware of who the Architects and constructors of the city had been. They knew very well that the “ancient people”, as they called them, were their direct ancestors, Maya as they were, and they felt closely related to the Puuc creators that had built Uxmal and Kabah, Sayil and Labná.

When the time came, our friends hung a couple of hammocks for us from the wooden posts in the porch and then retired for the night themselves. Marta and I did the best we could to do the same. Then we felt the oppressive presence of the jungle outside, while a cacophony of noise, roaring and howling and sudden movements from what we thought to be a thousand wild animals overcame us. We climbed down from our hammocks to erect our tent almost inside the porch of the house.

Next morning we woke up to discover that Jacinto had been working since the first hours of the day to prepare venison pibil, that ancient Mayan recipe that uses achiote and sour orange juice to flavor the meat which in turn is cooked in an underground oven. Breakfast was just terrific. We walked over Labná all over again, this time to enjoy her with the morning light, and yes, to help the food down a bit.

When we parted, we traded fresh fish filets that we kept in our camping cooler for venison pib and tortillas. Marta bought from Jacinto’s wife a white blouse embroidered with blue motives, hand made by our hostess herself. We did not want to leave. I took out two more kites from the trunk, for every child to have his own.

We drove out from Labná with a song in our hearts and with a smile in our souls. After that we visited Uxmal, Chichén Itzá, Oxkintok, Tulum, Palenque, and many other important Maya centres. Years later, we even managed to get acquainted with the great city of Tikal, deep inside the dense forest of the Guatemalan Petén.

But we have always kept a very special place for Labná in our memories of travel through the Mayan country. 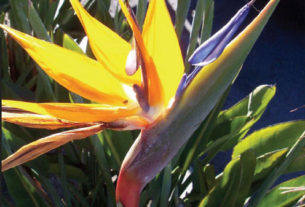