The pre-Hispanic pumpkin seeds and the sesame seeds brought by the Spaniards come together in a wonderfully textured candy, also sometimes called palanquetas. If giving the candies as gifts, wrap each in cellophane, twist the ends closed and tie them with thin curling ribbon, called listón chino in the mercerías, or notions stores.

Place the piloncillo and water in a heavy bottomed saucepan and bring to a boil. Lower heat to medium and cook syrup, stirring frequently with a wooden spoon, until it reaches the hard ball stage, 245º on a candy thermometer.

While the syrup is cooking, pop the pumpkin seeds on a dry skillet until most of them have puffed up and popped. Shake the pan gently while this is happening, but be careful of seeds that sometimes “jump” out of the pan.)

When the syrup has reached the hard ball stage, immediately remove it from the heat and stir in the popped pumpkin seeds and toasted sesame seeds.

Drop tablespoonfuls of the mixture onto waxed paper. Allow to cool completely before wrapping in cellophane, plastic wrap or waxed paper. Makes about 2 dozen.

NOTE: Piloncillo can be very hard, so to break it into smaller pieces, which melt more easily, I wrap it in a clean kitchen towel and hit it with a hammer. This is probably nothing you would see on television cooking shows, but it works. 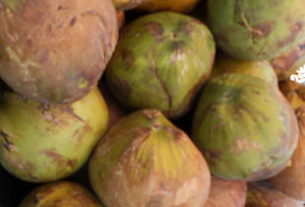 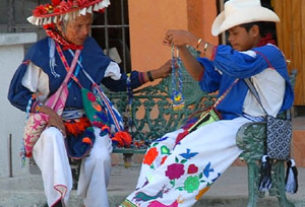