Unbelievable: Mexico has 111 magic towns with more in the hatchery.

The Pueblos Mágicos program was launched in 2001 by Mexico’s Secretariat of Tourism in conjunction with other federal and state agencies to promote towns chosen for natural beauty, cultural riches and historical relevance.

You have been spared by one. The colorful village of Chapala, beside the big lake of the same name, in the exciting state of Jalisco, did not win the proverbial pat on the back and magical embrace.

Defeat did not dampen the idea. It has been handed off to the adjoining lakeside village, Ajijic. It is now in the race. Others await confirmation.

Beaches, resort areas and ancient ruins generate the most appealing stories and attract the most visitors. It was obvious that many million tourists had missed the magic and intrigue along less-traveled routes.

The next year, Tequila in Jalisco and San Cristóbalde las Casas in Chiapas were added.

People began to ask how many is enough? If we get too many magic towns, all will lose their magic.

There was no stopping a good thing. In 2004, Real del Monte in Hidalgo and Parras de la Fuente in Coahuila were so designated. In 2005, Valle de Bravo in México, Mazamitla in Jalisco, Álamos in Sonora, Tlalpujahua in Michoacán, Cosalá in Sinaloa and Bernal in Querétaro were added.

Locals cheered. Tour companies published new brochures. According to surveys, the average visitor to a magic town was contributing 768 pesos a day. Town spokesmen estimated tourism jumped between 20 and 30 per cent with the magic designation.

Towns accepted into the program had access to federal funds for publicity and improvements. Some did road work. Some polished statues and monuments. Some moved utility wires underground.

There was a time when I had a list of magic towns we had visited and magic towns we wanted to see. Alas and alas, Mexico’s Secretariat of Tourism ran much faster than our experienced (old) Volkswagen bug.

You get the idea. Everybody with electric lights and running water wanted a piece of the tourist promotion. The world record was established in 2015. One hundred and eighty Mexican towns sought membership. Only 28 were selected.

Chapala worked on the dream for a couple or three years. It swept and painted and washed windows and certainly improved its looks. It went so progressive as to group street vendors. Officials wanted to sweep them off the malecon.They remain.

The plaza was slicked up. Old city hall was restored. The city now conducts business in what was once an elegant hotel. If you haven’t been to Paris Café in a few years, you might not recognize it.

I thought Chapala had a chance to gain Pueblos Mágicos status. It has location – close enough to Guadalajara to claim convenience and far enough away for at least minimum peace and tranquility. Yes, the parking problem remains.

The setting is spectacular. Lake Chapala is the largest lake in Mexico. Reasonably intelligent water management hints that it may not go dry. Behind the lake and the mountain are sensational sunsets. There are islands to visit and boats to provide a ride.

Chapala has history. Porfirio Diaz put it on the map with his summer home. D.H. Lawrence wrote The Plumed Serpent while in Chapala. Tennessee Williams was there and, with little else to do one day, wrote Night of the Iguana there.

Famous architect Guillermo de Alba designed the historic train station which lives on, lovingly restored and surrounded by art and crafts. OK, so it took two decades. This is Mexico.

Among the mansions along the water front are the Braniff House and Eiffel House. Both are photo opportunities. So is the church with twin spires.

If you keep looking, you might find the encouraging words of John Russell Clift from 60 or 70 years ago:“Thirty miles south of Guadalajara is the town of Chapala, on the shore of a lake of the same name. Its charms are many;living is cheap. Its beauty is one of deep colors and sharp contrasts.”

Even without the “magic” designation, Chapala has appeal. If you go, find Jose’s Place, a little (tiny) restaurant along the right side as you face the market house. Jose is an artist with gas grill, spoon,spatula and mixing bowl. From this unlikely setting, he sells ribs and salmon and white beans and potato salad better than mother used to make. 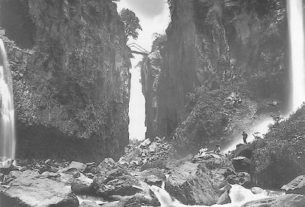