Sooner or later, everyone in Mexico encounters La Llorona, The Woman Who Wails. It is known that stories about La Llorona dated back to the time of the Spanish Conquest of Mexico. Some say she is older than the Aztecs, old as despair itself.

Legends are often a mix of history and imagination. Real events combine with the ideas or points of view of people and ripen over time. Most Mexican legends are several centuries old; some dating back to pre-Columbian times while others were born in the colonial period. A legend like La Llorona entails the ideas, values, beliefs, and fears of many generations of people over many places and times.

The word, Mexico, means ‘navel of the moon’. Traditionally in cultures all over the world, the moon is a symbol closely associated with women. Mothers are symbolic with the giving of life. In the clash of cultures that engender Mexico’s horrific problems also germinates a great flowering of humanity. Is it any wonder that legends about a grieving Mexican mother endure to this day?

Legends tell how a mother gave away her children in a time of famine and now, brokenhearted, forever mourns them. Another legend says that in the few years prior to the arrival of the Spanish to Tenochtitlán, a woman was heard, especially at night, weeping loudly: “Oh my poor children! Where could I take yooouuuuu? Where could I hide you?”

This was interpreted as an omen for the fall of the Aztec Empire. Some say La Llorona is Malinche, mistress of Cortés, endlessly lamenting her betrayal of her own Indian people to the Spaniards. Perhaps La Llorona was an Indian girl of noble blood who lived with a Spanish gentleman. When he abandoned her to marry a woman of his own race, like Medea abandoned by Jason, the Indian girl strangled her children and committed suicide. Her ghost, it is said, still prowls at night within the walls of Mexico City bewailing her sacrificed sons, which explains the name Llorona, the Bereaved.

Another popular variation to this legend tells how a beautiful young lady, wearing an elegant dress used to appear at night, before midnight. Her face remained hidden to those who followed her towards the river or another watery place. Some men, wild with excitement over her apparent beauty, upon approach, discover she has no face. Only a skull!

Some men died instantly, others drowned, and of course a few lived to tell the tale.

This story was told again and again as a warning to young men not to go out at night or not to go out and get drunk. Or told to children to prevent them from going near water and drowning.

So who is the woman in the legend of La Llorona?

For the ‘Woman who Wails’ cries from a well of sorrow deep as the dark of eternal night. Her cries can never be forgotten, for they are not sorrow but utter heartbreak. The legend of La Llorona is one more mystery in this vast, beautiful, exasperating land called Mexico.

A chant of Llorona’s ends this way:

“Woe is me, Llorona,
Llorona of yesterday, of today
Yesterday I was a pure marvel, Llorona
Today my shadow follows me.
People say I do not suffer, Llorona
For they don’t see me crying.
The dead remain silent, Llorona
But their suffering is that much greater.” 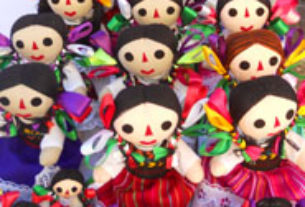 Did you know? Steamboats on Lake Chapala