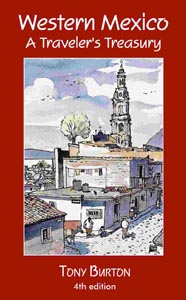 For anyone who lives or travels in western Mexico, Tony Burton’s Western Mexico: A Traveler’s Treasury is a “must have.” I own a well travelled copy of the third edition (2001) but I was delighted to see a fourth edition (2013) recently appear… in part because so many changes have taken place in the decade or so that has followed the third edition. For example, Guachimontones, the round pyramids west of Guadalajara, was mentioned in the third addition but not described in any detail because it did not exist as a tourist destination. Full excavation began in 1996, and it was only in recent years opened to the public.

There are lots of other changes as well. “A federal project to promote cultural tourism, called Pueblos Mágicos (Magic Towns), has brought much more publicity to no fewer than 15 towns featured in previous editions, including Tapalpa, Tequila, Mazamitla, San Sabastián del Oeste, Lagos de Moreno, Comala, Pátzcuaro, Santa Clara del Cobre and Angangueo.” In this past decade, the “quality of hotels has also improved, with the opening of excellent boutique hotels, some of them in quite unexpected places….”

New chapters have been added, new material has been added to existing chapters, maps and directions have been updated, new destinations, like Zacatecas, have been developed in detail.

Reading Western Mexico: A Traveller’s Treasury, I felt that old desire rise up in me to be on the road, if only for a day or two. And so, even before writing this review, I called a young Mexican adventuress in Guadalajara. With the Kindle version of Western Mexico in hand, we headed up a now modern highway to the charming old colonial town of Mazamitla, high in the mountains on the south side of Lake Chapala… and far more sophisticated than when I visited it twenty years ago. We even stayed in the inexpensive ($40 USD) boutique hotel Hostal Ciervo Rojo (a member of the Haciendas and Country Houses of Jalisco) recommended by Tony in his book.

A few days later, I went with a Chapala buddy on a day trip to Guachimontones, the round pyramids west of Guadalajara, passing trucks loaded with sugar cane, passing stands of a local potent drink called pajarete (a combination of milk, aguardiente, brown sugar, and sometimes chocolate) to arrive at what has become in a few short years, “one of the most astonishing archaeological sites anywhere n Mexico,” although only twenty years ago it was only “mounds of earth.” “The dramatic circular structures at Guachimontones, tiered in concentric terraces, are absolutely stunning….”

As Tony notes in his Introduction, this is “not intended to be a comprehensive guide to all the possible day trips and longer tours in the region…. Rather, it is a personal, idiosyncratic collection of my favorite places in Western Mexico….” The book is filled with whatever Tony finds fascinating… interesting and curious details of history and geography and geology and flora and fauna, and art and architecture and archaeology.

My kind of book!

Parts One and Two cover destinations within three hours of Guadalajara or the north shore of Lake Chapala…day trips. Part One begins with a history of the region from ancient times to the present, and discusses in detail Mezcala Island — “Lake Chapala’s National Monument” — and the “The Riviera communities: Chapala, Ajijic and Jocotepec,” although the spas at San Juan Cosalá, like the luxurious Monte Coxala with its large-scale pre-Hispanic replicas, are also included along with interesting places to stay, like the Los Dos Bed & Breakfast in Jocotepec, which was the home and studio of internationally famous Austrian artist Georg Rauch. Although Rauch passed away a few years ago, his charming wife Phyllis continues to operate their bed and breakfast.

Part One also takes us to the south shore of Lake Chapala, to places like Jiquilpan, a nondescript town that gave birth to two important Mexican presidents — Anastacio Bustamante and Lázaro Cárdenas), and several distinguished artists, like José Clemente Orozco, “one of the famous “Big Three” of Mexican Muralism.” Rafael Méndez (whom I heard when I was a teen, back in Ohio), “arguably the world’s greatest ever trumpet virtuoso,” was also born in Jiquilpan.

In Part Two we go west of Guadalajara to Guachimontones — those round pyramids — and to old haciendas (with concise histories of each), and to Tala, the sugar town, and to the giant stone spheres near Alhualulco. We also learn about mines… silver, opals, obsidian, and of course we visit the ever popular town of Tequila.

Part Three takes us on longer trips, best for overnight stays, to picturesque mountains towns like Tapalpa, and through pine forests to Mazamitla, and to Colima, a provincial state capital with important archaeological sites. Near Colima is Volcán de Fuego, sometimes called Volcán Colima, “the most active volcano in Mexico, and indeed one of the most active in the world, having erupted at least 30 times since 1576.”

Parts Four to Nine cover longer trips, to places like León, the “Leather Capital of Mexico,” and to Aguascalientes, and Zacatecas, and Bolaños, where the “old mining town revives its fortunes.” In Part Six we head west to the coast, to San Blas and Guayabitos (a youthful beach town for “a modestly-priced family holiday”) and even to Puerto Vallarta, “the resort that keeps reinventing itself.” In Part Seven, Barra de Navidad and Melaque — places once popular with pirates like Sir Francis Drake and Thomas Cavendish — are jewels not to be missed, and discovered by tourists only a few decades ago. Part Eight finds us on the road to Tzintzuntzan and to Pátzcuaro, a region where the first Bishop of Michoacán, Don Vasco de Quiroga, “based his approach on the Utopian principles espoused by Thomas More. He established a series of communities in the vicinity of Lake Pátzcuaro, the heart of Tarascan country, where the people would receive training in arts and crafts alongside religious instruction.” He allocated “specific crafts to specific places,” and thus today, Paracho is famous for its guitars, Tzintzuntzan (named after the sound a hummingbird makes with its wings) is famous for its pottery, Santa Clara for copper, and so on.

The final section, Part Nine, is mostly about the beloved monarch butterflies of Michoacán. “Every winter, some one hundred million monarch butterflies fly into Mexico from the U.S. and Canada. On arrival they congregate in a dozen localities high in the temperate pine and fir forests of the state of Michoacán.” Tony discusses the various reserves where visitors can witness the amazing number of monarchs, but Tony also insists that you sample the delicious local blue-corn tortillas. He also takes you farther west to Tuxpan and the country where John Huston shot Treasure of the Sierra Madre, staring Humphrey Bogart. The first bend on the narrow road from Tuxpan to Jungapeo is the bend to have a name on the official topographic survey map: La Curva de la Gringa, a rather dangerous 110-degree bend.

Leaving The Gringa’s Curve behind, you come to the best place to overnight or vacation in this “scenically-stunning part of Mexico,” at the Agua Blanca Canyon Resort, “a charming, small spa-hotel with just 20 rooms, its pools and lawns overlooking the deeply carved valley of the River Tuxpan.”

As in the earlier editions, Tony concludes with a useful appendix that has a “Table of elevations and approximate driving times,” for example from Chapala to Barra de Navidad is four hours and thirty minutes, from Chapala to Mazamitla is one hour and forty-five minutes. He also advises you to take a look at “online forums, such as those on Mexmonnect.com, to ask for up-to-date information and advice from people who have recently made the same journey or visited the same places.”

If you live in western Mexico or are thinking about living here or visiting here, make this the first book you buy. It has always been a favorite of mine and this latest edition of Western Mexico: A Traveller’s Treasury is the best ever!

The museums of Guadalajara and Tlaquepaque

Wishes Instead of Resolutions

How To Make Teaching English In Mexico A Reality, Part 1