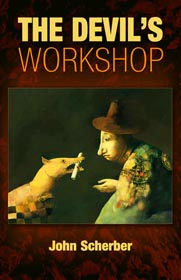 I do not normally read fantasy fiction, but because The Devil’s Workshop is by John Scherber, a writer I admire, and because most of it is set in Mexico, I read it… and found it fascinating.

The story begins as Mark Sands, a successful money manager — after little people with grubby hands drug him and drop him over the parapet of his broad veranda — is falling twenty-seven floors to his death. Feeling detached, perhaps defensively, from his plummeting body, Sands wonders, “How had the little people emerged from the painting over his buffet? It was his Rafael Cantú masterpiece, The Last Supper, the prize of his collection. And they were the characters from the painting. He recognized the odd, ragged leather outfits. Had he been murdered by these nightmare versions of Christ and the Apostles?”

Our delightful heroine is twenty-seven year old Rebecca Stuart. She lives in St. Paul and is the author of Grunge — “her first published detective novel turned into a surprise best seller.” She is a client of Mark Sands, and with some of her sudden wealth she wants to collect unusual contemporary art (she has a degree in art history). Her second novel was “published to indifferent reviews” and now she is desperate to come up with a really successful third novel.

On a trip to Santa Fe, Rebecca acquires a painting, Girl with Three Players, by that same Rafael Cantú whose work had literally come alive in the dining room of the luxury condo of Mark Sands, and whose paintings, to Rebecca, “represented the most complete and coherent set of dreams she had ever seen outside of her own….”

As Rebecca begins to connect several events together… several deaths… she (like crime author Jessica Fletcher in the series Murder, She Wrote) becomes more and more determined to get to the bottom of things. In the process, she will, hopefully, accumulate sufficient material to write another best seller.

When lab tests confirm Sands had been drugged, Detective Ken Abrams of the Saint Paul Police becomes convinced that the apparent suicide was in fact a murder. He develops a list of possible suspects, lovers, clients… and the list, because she is a client, even includes our heroine, Rebecca. Detective Ken Abrams is also lonely.

Abrams sees Rebecca in person for the first time at her home. She opens the door “facing him in jeans and a black tee shirt that said BITE ME across her chest.” When he studies her new purchase and discovers it is by Rafael Cantú, he tells Rebecca that Sands had in his home a painting by the same artist. “This information hit her like an electric shock.”

Rebecca wants to see the other painting. She insists to Abrams that “Suicide never made sense. Let me into his condo, please, I know I can help with this. I know how to find things that cops miss.”

Abrams is intrigued. Rebecca “thought of herself as almost beautiful. It appeared that he did too.” Abrams also found Rebecca “scrappy and intelligent.” He invites her to lunch and, being at a dead end regarding the Sands murder, he asks her to help him. “Chewing slowly, he gave her a long look and moved his fork over his steak, thinking about whether he could trust her. Of course he couldn’t, he only wanted to trust her. Just three days earlier she’d been a suspect. Next she’d be solving the case before he could. Then she’d never talk to him again.”

Jeremy is her research assistant. (Rebecca wonders whether he buys his clothes at a special nerd store in Saint Paul). She puts him to work on the case, and he quickly discovers that “Sands translates as Arenas in Spanish.” That clue and subsequent ones, oddly related, take them to Santa Elena, a big city in north-central Mexico, “founded, as it happens, by Mark’s ancestor, Juan de Arenas, in 1529.” Our little detective team now consists of Rebecca, Abrams, Jeremy, and a new companion for Jeremy, Luisa.

Jeremy had never had any luck with the ladies, was a virgin at 25, but one night in a bar he is attracted to a pretty young woman sitting alone who, as it turns out, was attracted to Jeremy, who bewitches Jeremy — and who was literally the girl in the Rafael Cantú painting, Girl with Three Players, recently purchased by Rebecca. Incidentally, I found myself a bit bewitched by the idea of paintings that have a literal life of their own.

In Mexico, in search of Rafael Cantú, our team discovers there is another community, a much smaller one, hidden for centuries, below the big one, the city of Santa Elena; and its residents, like many of those in the city above, are descendents of that same Juan de Arenas, although 350 years ago that particular part of the family had been cut off and hidden because of birth defects that were passed on through generations. Luisa tells Jeremy, “You could even say that my people were driven underground many years ago.” Things were becoming more and more clear to Jeremy, who is able, because of Luisa, to explore that dimly-lit community built under the ancient ruins of a cathedral apparently destroyed in an earthquake in 1656, “…and the picture he was getting was that she was part of an isolated group, begun by inbreeding and still inbred, coming from a tragic situation that had somehow started with Juan de Arenas and his first-cousin wife.”

Scherber tells a good story. If you love Mexico and love mysteries also take a look at his Murder in Mexico series. There are ten of them so far. They feature a San Miguel artist named Paul Zacher, who uses his unusual ability to see things differently to solve crimes. I recently reviewed The Theft of the Virgin for Mexconnect and look forward to his latest, The Book Doctor. 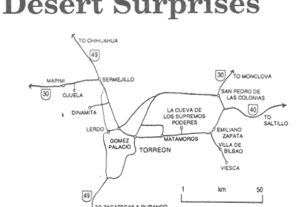