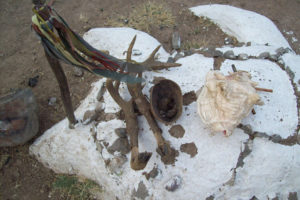 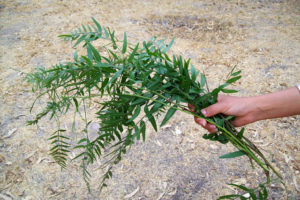 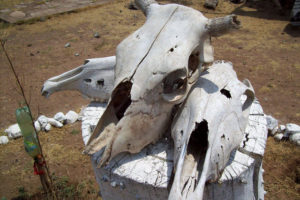 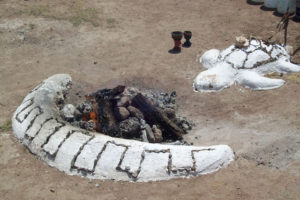 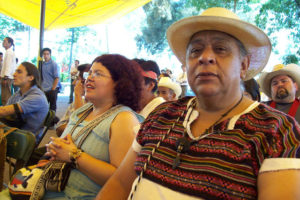 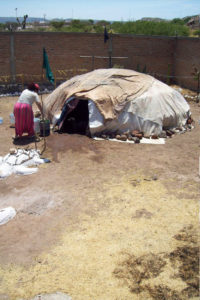 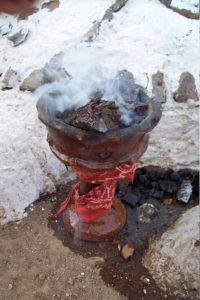 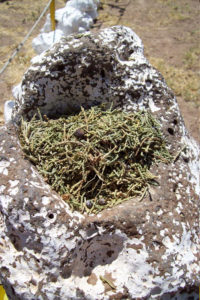 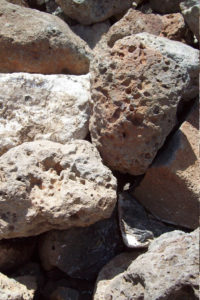 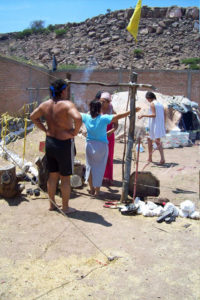 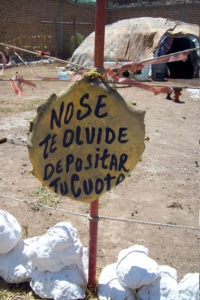 We sit in darkness, on an earthen floor. Hot vapor condenses and drips down my skin as I hug my knees against my chest and breathe lightly to cool the scalding vapor before it reaches my lungs. The beat of a drum, leather stretched over a wooden frame, penetrates my chest, and we begin to sing in Spanish:

… and on and on we sing. This is temazcal.

Temazcal, also known as temazcalli, is a traditional native Mexican American purification ceremony. It’s similar to the sweat lodge, or inipi, of the Lakotas, or kiva of the pueblo dwellers in the western United States. Temazcal guides claim that their temazcal ceremonies are cleansing and that they cure or relieve symptoms of many ailments. I’ve heard testimonies from temazcaleros (participants in the temazcal) that the ceremony has helped them battle health problems ranging from the common cold through cancer, diabetes, and emotional and psychological ailments. 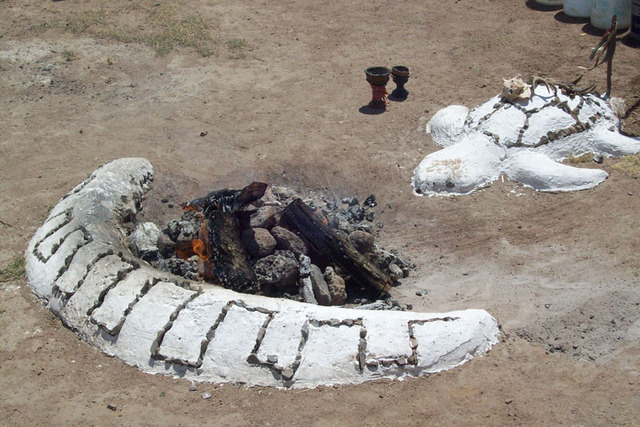 Saunas, which are different from the temazcal, do have known health benefits, including improved cardiovascular circulation and cleansing provoked by perspiration. However, saunas don’t necessarily involve a spiritual celebration.

Los Osos (The Bears), a couple who lives in Durango, run a temazcal on the foothills of the Sierra Madre Occidental. For them, the temazcal is part of life on el camino rojo.

Every Sunday afternoon, temazcaleros find them tending red-hot abuelitas (grandmothers, or hot, volcanic rocks used to generate heat and vapor in the temazcal ceremony) in a blazing fire.

The two of them work together in a charming duality. The Oso, a gigantic, gentle, man, guides temazcaleros with a gentle hand on the huaje, a gourd cut to dip water. He uses it to softly pour water on the glowing abuelitas as he shares wisdom from the camino rojo with temazcaleros. His voice, powerful, yet soothing, carries his interpretation of the love of the Great Spirit, as he guides us along the red path.

Lety, his wife, also known as La Osa, leads every other ceremony, but with a more driving, hard-handed wield on the huaje. She’s a methodic and exact singer, known for really heating up the temazcal to help us recall that we’re humble, mortal beings walking the face of Mother Earth. Lety’s message, like that of the Oso, guides us with our feet firmly on the camino rojo.

El Oso says that the Great Spirit will grant everything one asks for in the temazcal, but he warns, “Be careful what you ask for in the temazcal. Don’t ask for a brand new car if you can’t pay the taxes or license plates. Ask only for what you can really handle.”

Temazcaleros ask for cures to ailments… their own, and those of loved ones, for peace in their pueblo, for help dealing with difficult people, help for kidnapped or imprisoned relatives, for restoration of balance on Mother Earth or help dealing with their own emotional or economic problems.

Berenice says that she has asked for a loving husband, health for him and her family, abundance and happiness in her own life, help with a surgical procedure, proof that her husband has been honest with her, a house, and many other things. She says that she received most of what she asked for and that she’s sure that the rest will come to her. Another participant in Oso’s temazcal claims that she asked for help with her diabetes and received it.

Many participants, especially newcomers, attend temazcal ceremonies for esthetic reasons. Caminantes say that the hot vapor and mud generated from the earthen floor work together as moisturizer and exfoliant, respectively. Some temazcaleros rub the gritty mud on their skin, leaving it soft and smooth. Other participants seek a cure for some ailment they have. Sometimes simple curiosity brings newcomers to the temazcal. Whatever the reason, most people, if they open up to it, experience what the Oso has referred to as the “magic” of the temazcal.

Berenice, after a recent temazcal ceremony, commented, “The first time that I went to a temazcal, I felt strange because I really felt an energy that one doesn’t normally feel. I felt inhibition. But, afterward, when they began to explain about the process, I felt more relaxed.” She continued, “Entering the circle, one feels a positive energy. I like that they cleanse me with smoke from copal. I like that upon entering the circle I receive a fistful of tobacco, and I lift my hand to the sky and ask for something.”

Mexican temazcal guides conduct their ceremonies within permanent or temporary dome-shaped structures. Temporary temazcal lodge frames, like that of the Osos, consist of 16 vertical saplings, often willow saplings, in a circle, bent and bound to four consecutively smaller circles of saplings, giving the lodge its dome shape. Traditionally, temazcaleros placed vegetation or cured animal hides on the frame to hold in heat and vapor and darken the interior of the temazcal. Today guides generally use blankets and tarps. Other guides build permanent lodges of volcanic rock, cement, or adobe (cob).

The 16 poles, four hoops, and four puertas or doors are no coincidence. The number four (and multiples of four, like 16) represent, among other things, the four stages of life: birth, childhood, adulthood, and old age followed by death. Lety recently explained that the temazcal ceremony is feminine. “Being inside the temazcal is like being in the womb… dark, warm, humid, and safe.” She explained that we are “born again” each time we participate in the temazcal. Introducing water into the temazcal, temazaleros chant “O Meteo, Okahe,” meaning “Everything is good. It’s a good day to die.” Each day we die and are reborn; life is a cycle.

To convert the lodge into a steaming hot “womb,” one of the participants — referred to as the hombre fuego, or fire man — introduces fired, red-hot abuelitas into the lodge. A second person, within the lodge, uses deer antlers to place the rocks into a hole (the ombligo, or belly button) in middle of the lodge’s earthen floor.

Abuelitas positioned in the ombligo, a third temazcalero daubs them with “medicina” (literally, medicine), which is generally resin from the copal tree or some other aromatic herb, like mint. Leticia comments that many of the herbs have medicinal properties and that they avoid potentially harmful herbs.

Abuelitas inside, daubed with medicine, and lodge flaps closed, the temazcal ceremony guide then celebrates the first “puerta” (gateway), asking permission to celebrate, praying, singing, story-telling, or asking other participants to do any of these activities. Three more puertas follow, and the with the fourth puerta, we’re reborn.

Just as each gateway has its guardian, each has a symbolic color: yellow, red, black, and white. The colors represent the four races of humans on earth, and each color has specific spiritual meanings for the temazcaleros. Such symbolism plays an important role for caminantes, and ceremonies include symbolic instruments like pipes, rattles, and drums.

The temazcaleros also celebrate and thank the four elements. They sing,

“Earth my body;
Water my blood;
Air my breath; and
Fire my spirit!”

Four is a sacred number for the temazcal guide.

The Oso sees all things, living or non-living, as sacred, and practiced temazcaleros take great care in the use and handling of the spiritual items. I recall a temazcal ceremony in Milpa Alta, where I was given the honor of placing abuelitas in the temazcal pit. My first attempts where hurried and clumsy. I felt my fingers and knuckles burning as I lifted the abuelitas from the ground with deer antlers. After breaking a point off an antler that I was using, the hombre fuego, who had supervised the building of the ceremonial fire and heating of the abuelitas, told me that I must learn control my body and move the abuelitas with respect and finesse, even if they are really heavy and burned my knuckles. I suffered; I learned. I can’t even count how many times the lesson has come back to me, reminding me to act and do things, respectfully and mindfully. 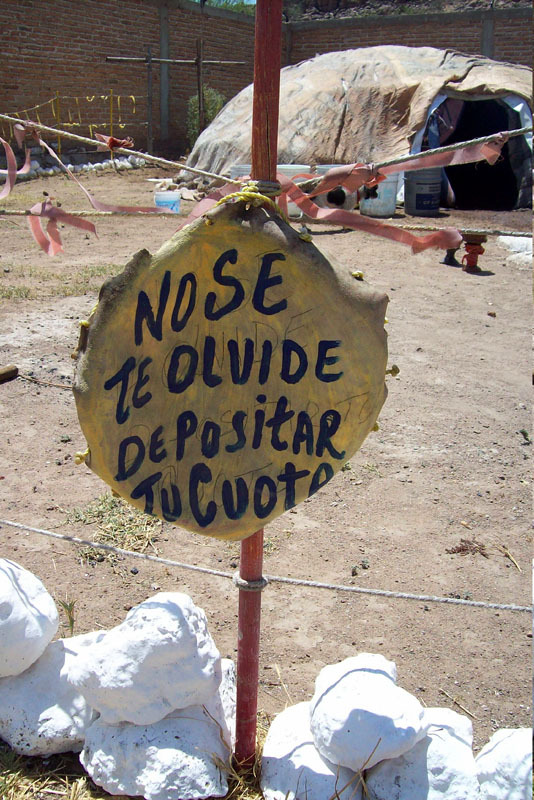 A reminder for a ‘cooperacion,’ or donation for the people organizing andd performing the temazcal ceremony. © Jeffrey Bacon, 2012

Preparing for a Temazcal

Temazcal newcomers should prepare for the experience to assure that it’s an enjoyable one. First, it’s important to drink a lot of water the day of the temazcal ceremony. I generally drink two to three liters of water beforehand. Drinking water helps prevent dehydration. Also, bring another two or three liters of water, and maybe even a beverage containing electrolytes for after the ceremony. This is especially important for persons who have high, low, or highly variable blood pressure.

Participants occasionally feel light-headed, dizzy, or even faint coming out of a temazcal ceremony. Persons with physical ailments, or who tend to pass out easily, should comment the situation to the temazcal guide before participating in his or her ceremony.

Clothing requirements vary from temazcal to temazcal. Men generally use shorts, and women use long dresses. Check with your guide beforehand, if possible, to assure that your clothing is appropriate. Guides generally understand that newcomers may come unprepared, but will make suggestions for next time. A bandana is useful for protecting the forehead from excess heat and comes in handy for wiping perspiration or a runny nose caused by hot vapor.

Most of all, show up to a temazcal a little early, maybe even visiting a day or so before, to talk to the guide about what to expect. Each guide conducts his or her temazcal differently. Get to know your guide, and assure good communication with him or her. Finally, relax, perspire, and enjoy. It’s a good day to be reborn in the temazcal. 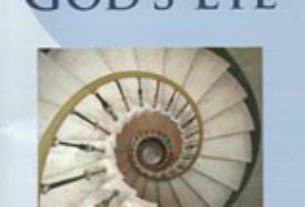 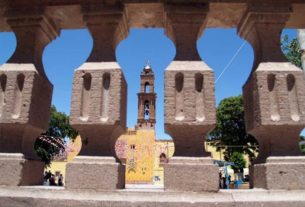