Many years ago, two young students of mine in California went on a family trip to visit their grandparents in Mexico. When they returned, they couldn’t wait to tell me the funniest word they’d heard: “cacahuates.” Those four catchy syllables really made an impression on them, possibly because of the incessant cry of the peanut vendor at every bus stop and train station along their way.

The passenger trains are nearly extinct now, and the bus depots have grown into modern terminals, but the peanut vendor is still with us, hawking the humble legume which arrived in Mexico around 500 A.D. and has since been given a star role in some of the country’s most exquisite moles and sweets.

The origin of the peanut has been widely disputed; for many years it was thought to have originated in West Africa, from whence it made its way to the United States. While it is true that the peanut was imported into the US from West Africa, it was originally brought to Africa from Brazil by Portuguese traders.

The late Sophie Coe, culinary anthropologist extraordinaire, pointed out that the real proof of the origin of the peanut lies in the fact that there are no wild peanut plants found anywhere outside of South America. Over fifteen species of wild peanuts are found in lowland Bolivia, where they were first domesticated and spread to Brazil, the Carribbean, and Tehuacan, Mexico, the ancient agricultural community in southern Puebla state where archeologists unearthed the oldest kernels of corn.

Given the peanut’s introduction into Mexico via Puebla, it is not surprising that it first appeared in Mexican cuisine by way of the Poblano colonial convents. Built by the Spaniards, and housing the daughters of some of the wealthiest Spanish colonists, these convents were the birthplaces of several of Mexico’s most highly prized culinary specialties, including chiles en nogada and mole poblano, of which peanuts are an indispensable ingredient. The nuns also used peanuts in their vast repertoire of sweets, most of which are still made in Puebla and other colonial cities. They were a perfect substitute for almonds in almendrados, a sweet made with almonds, honey and flour, and in turrones, a nougat-like confection made with nuts, honey and egg whites.

Although they had no trouble eating the exquisite dishes containing peanuts, the Spaniards were more than a bit confounded by the way peanuts grew. Arachis hypogaea, the peanut plant, sends up a stalk which produces a white flower. After the flower is fertilized, it droops over into the ground, where the fruit grows. Thus, for several years, the Spaniards were puzzled as to how the flower and fruit could be in two different places. Its underground growth is the apparent reason for its Nahuatl name tlal-cacahuatl, meaning earth-cocoa, from which the Spanish cacahuate is derived.

Today, peanuts are used extensively in Mexico in cookie and candy making, as a flavoring added to the beverage pulque, in moles, and as popular botanas – snacks – roasted with chiles, whole garlic cloves and salt, and served as an accompaniment to beer and cocktails. Mexicans usually squeeze lime over the entire plate of seasoned peanuts, making a messy, but delicious, combination.

Plain, shelled peanuts, with the skins removed, are used in cooking and baking; in roasting peanuts for botanas, the skins are left on. The following recipes offer examples of how peanuts are used in Mexico in both main dishes and desserts. 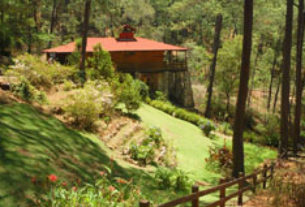