The most important center of the Mexican highlands after the fall of Teotihuacan was Cholula, near the twin volcanic peaks Iztaccihuatl and Popocatepetl and the city of Puebla. The Great Pyramid there, dedicated to Quetzalcoatl, is the largest single structure in the New World. Towering 181 feet high and covering an area of some 25 acres, the pyramid was begun in Pre-Classic times and enlarged four times. Seen from a distance today, it appears to be a large hill with a Colonial church resting at its summit. The interior of the pyramid has been extensively excavated, affording visitors an extraordinary opportunity to view the different phases of its construction.

The next culture of consequence was that of the Zapotecs in the Oaxaca Valley. Living in relative isolation due to geographical factors, the Zapotecs developed a distinctive architectural style. Their unique social structure included kings, although with priests maintaining power in domestic affairs, their government was essentially a theocracy.

The Zapotecs completed Monte Alban, a great ceremonial center begun during the Formative era on a flattened mountain top 1300 feet above the valley floor. The oldest extant structure, noted for the bas-relief sculptures of the danzantes (dancers), shows some characteristics of the Olmecs. The influence of the lowland cultures of Chiapas and the Maya, as well as Teotihuacan, is apparent in subsequent phases in the site’s development. But the Zapotecs brought Monte Alban to its zenith between 600 and 900 AD.

In the Post-Classic Period the Zapotecs lost their domain to the neighboring Mixtecs who, through warfare and marriage, established a federation of city-states in the region and turned Monte Alban into a necropolis. The Mixtecs left much of their history recorded in magnificent deerskin codices. The culture is noted for excellent craftsmanship in precious metals, turquoise mosaics and ceramics.

The Mixtecs and Zapotecs coexisted over the next few centuries. A blending of their respective styles is visible in the intricate geometric stonework at Mitla, a site considered one of the architectural wonders of ancient Mexico. 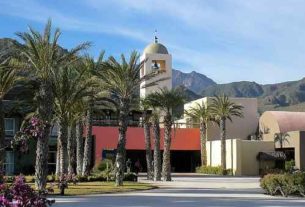