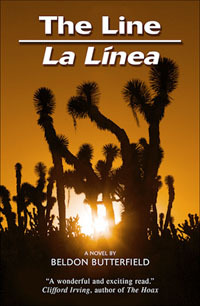 “A story filled with sex, violence, and drugs, even love, a story of treachery, where only power and money ultimately are valued.”

In a technique similar to that used by another fine Mexican writer, Elena Poniatowski, Butterfield’s fictional journalist, George Redfield, tells us that

“I have just written a manuscript that took fifteen years to complete. It’s a story about people, some whom I came to love, involved in the traffic of illegal drugs between Mexico and the United States, along the border known as “the line/la línea,” depending if you were looking from north to south or vice versa. I’ve written this book as a novel, even though the principal players were real people involved in real events, many of which merited newspaper and television headlines in their day. Fictionalizing these events seems safer at this point, despite many of the principal characters being dead, in prison or disappeared with new identities.”

George Redfield, this fictional journalist, narrates much of the story:

“I wrote this novel with the intention of telling a story of two people caught up in the world of ‘narcotraffic.’ How this affected their lives, in some cases warping and destroying traditional values so that the line between right and wrong ceased to exist. These two people were very much involved in the narcomundo. There is a third person, myself, for the most part a bystander.”

Who are these two people “caught up in the world of ‘narcotraffic'”? One is Mexican-born but American-raised Fernanda Garza, a beautiful young woman with a Yale degree, a position with the DEA, a lot of “attitude” that irritates her male superiors, and a liberated female with a lot of sexual energy. While still at Yale, she meets the dashing and often arrogant (but also educated and urbane) Jaime Nuñez. Nuñez is from Guadalajara, is at Yale getting his MBA, and in the States and on the beaches of southern Mexico he is addicted to “blonde bimbos” who are looking mostly for one night stands with a young Mexican stud. When Fernanda’s step-father becomes hooked on drugs and her best friend and lover, Alexandra, is institutionalized because of a drug overdose, Fernanda decides to commit herself to the war against drugs. Jaime, for other reasons has also made this commitment and he joins the PGR, Mexico’s elite law enforcement agency.

What follows is their fascinating story, a story filled with sex, violence, and drugs, even love, a story of treachery, where only power and money ultimately are valued. The Line/La Línea often reads like a journalist’s account of the narcotraffic along the US-Mexico border. Even the settings seem real and, in fact, Butterfield tells us in his “Author’s Comments” preceding the book that “All places, parks, restaurants, hotels, neighborhoods, streets and avenues, Mexican law enforcement agencies, military operations, drug inspection stations, etc., are real inside the time frame of this book….”

The Line/La Línea is well constructed and well written. In the act of collecting the material to write his novel, the fictional journalist has told us the story, one that reads like an eye-witness account of the drug trade in Mexico — particularly along the Pacific Coast, with much of the action taking place in Puerto Vallarta, Guadalajara (which of course is in the highlands but near the coast), Mazatlán, Culiacan (“the narco center of Mexico”), and Tijuana.

The antagonists, the Mijares brothers Juan Diego and Guadalupe, controlled the Tijuana Cartel, and Pablo El Machete Guajardo, their brother-in-law, with his gold-plated machete, was their brutal but effective “enforcer.” The Mijares brothers maintain and increase their power through violence. Should, for example, a policeman be unwilling to accept a nice bribe to look the other way, the Mijares brothers (and other drug lords) employed undeniably convincing tactics — like killing a family member, even a son.

Fernanda, who had been raised since the age of four in the United States, loved returning to the Mexico of her birth, but she discovered it to be a country of extreme contrasts: its “glowing, grandiose side, shining above the dark, primitive cruelty concealed beneath.”

Throughout The Line/La Línea we learn a lot about Mexico, its politicians, and the drug trade. President Miguel de La Madrid Hurtado, a member of the PRI, Partido Revolucionario Institucional that ruled Mexico until President Vicente Fox, says to one of his generals, “We’re always taking the moral high road in public and the low road in private.”

The drug dealers and the army work together: “Sometimes a drug dealer would ask the army to burn the fields of a campesino who had gotten out of line. In this way the federal and state police forces, commissioned as adversaries of the drug trade, complied with their duty, while at the same time forming an integral and active component in this lucrative business. You went along with the system; the alternative was a death knell on your career. There was no getting around the rule written in stone — plomo o plata, lead or silver.”

“Mexico could show it was participating in the war on drugs. Simultaneously, the military, the law enforcement agencies and the judiciary were lining their pockets and staying alive. These organizations were badly paid, while the drug traffickers earned all the money in the world. Everyone understood that both sides had to share in the wealth. There was no room for honesty or reformers inside the system.”

This is even more complicated because the drug business is essential to the Mexican economy:

“The income from drug trafficking, and the remittances undocumented workers in the United States send back to Mexico, not only keep the economy afloat, but also provide an enormous number of jobs through the investment of narcodólares, and the release of these dollars into the economy.”

In their efforts to destroy the Tijuana Cartel, these were some of the challenges faced by Jaime and Fernanda and recorded by George Redfield. How they met this challenge is the story author Beldon Butterfield has created for us.

Butterfield’s three-protagonist structure is a good one: we have Jaime our dashing hero, enjoying his exciting life with lots of money and his endless supply of good-looking women; we have Fernanda our beautiful heroine, strong-willed, wealthy, sexually exciting and available. And yes, it is fun us to fantasize being Jaime or Fernanda, but, beyond a moment or two of fantasy, it is, of course, nothing more than that.

But then — in a psychologically sound, even masterful, stroke — Butterfield begins the novel with the third, less prominent, protagonist, George Redfield, who for the most part is on the outside looking in (just as we readers are on the outside looking in). George is fifty-five years old, moderately successful in life, and living in a little Mexican village. George is someone we can identify with… hardly dashing… but no receding hairline. Someone much more like us, or at least like people we know. In the course of the novel, though, George, as he does his research — on the outside looking in — finds himself more and more drawn into the lives of the two people who fascinate him the most, the hero Jaime and the heroine Fernanda.

Well, Mr. Butterfield, thanks for a couple of days of exiting reading, with a beautiful heroine and a very satisfying ending to a story that is filled with insights about Mexico and the drug trade and which is told with craft and energy and even with love for your protagonists.

MexConnect is reader-supported. Purchases made via links on our site may, at no cost to you, earn us an affiliate commission. Learn more.
Published or Updated on: March 1, 2008 by James Tipton © 2008
Share This:
Tagged book-reviews border-crossings James Tipton mexico-novels social-issues 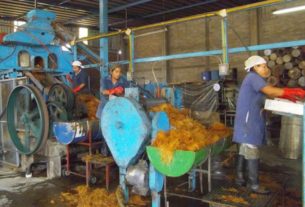