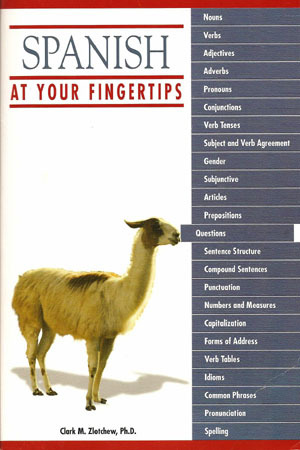 For this old brain of mine — that threatens to retire before I do — a book that makes simple what has always been somewhat complicated to me is a book that I will cherish.

Clark M. Zlotchew, Ph.D., has taught Spanish language at SUNY College at Fredonia in New York State since 1975. He has published more than a dozen books including translations of Spanish poetry and fiction as well as Alpha Teach Yourself Spanish in 24 Hours.

His recently published Spanish at Your Fingertips is well organized, easy to use, a delight to open almost at random while you are waiting in line at a Mexican bank or while you are sipping coffee in your favorite street café in San Francisco or New York City. You do not need to begin at page 1 and study through to page 364.

How does Spanish at Your Fingertips work? Perhaps you are still struggling with por and para (and that includes me and most of my expatriate friends here in southern Mexico). You can turn to Uses of Por and Para, Section 6.3 (which is Chapter 6, Section 3), even using the printed thumb-tabs when you get used to them. Professor Zlotchew has obviously worked very hard to make Spanish easy for his students, which includes us, the readers of his fine new book. Section 6.3 begins with a very condensed summary of the uses of por and para:

MexConnect is reader-supported. Purchases made via links on our site may, at no cost to you, earn us an affiliate commission. Learn more.
Published or Updated on: February 1, 2008 by James Tipton © 2009
Share This:
Tagged book-reviews James Tipton mexico-novels