As its name implies, this dish is traditionally served at weddings. The addition of chocolate makes it reminiscent of mole poblano, but the depth of flavor is achieved with far fewer ingredients. One reason for this is the use of whole spices, lightly toasted and ground, rather than powdered spices, which lose flavor quickly.

Preparation:
Soak the chiles in hot water to cover until soft, drain and place in blender. Place garlic in blender. Lightly toast cinnamon, cloves and cumin seeds in a dry pan or on a griddle or comal until just fragrant, being careful not to burn them, then grind in a spice grinder or use a mortar and pestle or molcajete. Add the spices, oregano and 2 cups of chicken broth to the blender and puree until smooth.

Heat about 2 tablespoons of oil in a Dutch oven, add the pork in batches just to cover the bottom of the pot and brown on all sides, removing each batch before browning the next, and adding oil as necessary to prevent sticking. Saute the onion in the same pot until soft, return the browned meat to the pot and add the pureed contents of the blender and the bay leaves.

Cover the pot, lower the flame and simmer until the meat is tender, about 1 hour. Add vinegar, sugar, salt to taste, chocolate and orange zest, stirring until chocolate has melted. More broth may be added to achieve the desired consistency, which should be like that of heavy cream.

Remove the bay leaves and serve the asado immediately, or make it one day ahead, refrigerate and reheat. Serves 8 as part of a meal with rice and tortillas. 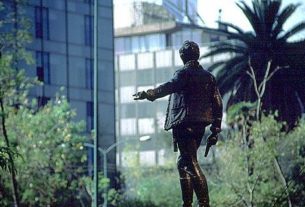 La Llorona: does she seek your children?