November is a busy month in Talpa de Allende. The corn has been harvested and the stalks stand in stacks in the open fields. The sun will soon dry them out enough so that they can be ground into fodder for the livestock. We’ve celebrated The Day of the Dead, birthdays, wedding anniversaries, The Day of the Revolution (one of them) and The Guayaba Fair will be in full swing in the latter part of this month.

We see a great quantity of guavas in this area and they are made into a sweet paste called rollos, or guayabate. This fair started out several years ago to promote the fruit, and has become a marketing venue for not only guavas, but eggnog, coffee, leather goods, resin figures and just about anything you can name. If it is handcrafted here, there has to be a market for it.

After a few years of seeing the mob scene itching to buy something made in Talpa, my good buddy, Guy Lawlor, and I decided to participate one year. Back in the summer when blackberries were in season, Guy got the bright idea of making blackberry wine. He had the perfect cellar in which to store it until November.

We have a beautiful tree in our garden that has grown to an enormous height. It is green all year long, but in the summertime it throws off a nasty, staining black fruit about the size of a chinaberry that keeps our gardener busy with the chlorine and brush. It is called ahuilote and it does not grow abundantly in Mexico. People from all over Talpa come knocking on our door in the autumn asking for its leaves and berries. I gladly give away the messy little berries but, being curious, I want to know how they are used.

“Josefina, you can have as much as you can carry, but why do you want these stinking things?” I ask.

“My daughter is now a young señorita and is having some problems. I make a tea from the leaves for her. It eases the pain a bit.”

“But what about the berries? What do you do with them?”

“We cook them with a little sugar and eat them.”

“Do you like the taste or do they also have medicinal properties?”

“They taste good, but they help with depression, hot flashes and night sweats when we go through that time of our life.”

I think about this and wonder what my life would have been like thirty years ago when I was living in Puerto Vallarta if I had known about ahuilote berries. Back then I just thought it was the hot weather. “But wait a minute, Josefina. Lots of young boys and girls come asking for the berries. Some of the girls may need them, but what about the boys?”

“Ay, they make an agua fresco from them to drink for their postillos.”

“Postillos? That’s a word I don’t know. What does it mean?”

Josefina puts her two forefingers to her cheek and squeezes them together. She continues her squeezing charade all over her face.

“Aha, pimples! These things are good for pimples?”

My great-nephews would certainly have preferred to eat an ahuilote berry than to take hormones during their acne-prone years.

So, another idea was born. “If Guy can make blackberry wine, why can’t I make ahuilote berry wine?” I thought. Howard and I drove to Guadalajara, thumbed through the yellow pages and found numerous places that sold bottles in every shape, size and color. The bottles come with plastic screw-on caps that automatically seal when you put them on. I bought several boxes of flat half-pint clear bottles for our wines. While wandering through the bottle store, I found small bottles about the size of a Tabasco sauce bottle and that gave me the idea to make a variety of vinegars, so I bought a ton of those bottles.

We planned our strategy well, we thought. Guy even had books on winemaking that we perused daily. We bought new plastic garbage cans with lids to use for our vats. We hesitated to mash the fruits in what we had heard was the Italian method. We used our kitchen potato mashers instead. We added the indicated amount of sugar, lime juice and zest plus water. We threw in a few egg shells to clarify the mix, capped our garbage cans and sat back and waited for our brews to bubble and gurgle.

Besides my smelly ahuilote berry wine, I had mango, pineapple, rosemary and apple vinegars going. My kitchen smelled like Dr. Jekyll’s laboratory, but we were preparing to become millionaires, or at least, pesonairs, with our home-produced vinification presentations. I installed a new program on the computer that made pretty pictures, so I cranked out professional looking labels for our bottles. Guy called his line The Madre of the Sierra Madres, and I just called mine Jenny’s Stuff.

These days Guy recalls that when he took the first sip of his nectar, he thought he could hear the angels sing. Mine certainly wasn’t that tasty, but off to the fair we went with decorated bottles of brews and vinegars.

The first day went well. We shared a space with a talented young lady who made candles and porcelain-like figurines, and another whose husband was the local huarache maker. We served samples of our wines as the eggnog makers did. People tasted, smiled and bought. When I tried to push my vinegars, they asked, “What’s that for?” I told them it was a salad dressing. They asked, “What’s a salad?”

The afternoon sun was hot. Our neighbor’s candles melted, the crowd grew weary, but Guy and I elbowed each other in the ribs from time to time to time as we glanced at our bulging cigar box where we kept our day’s intake. Obviously, we were a big success, or so we thought.

The second day we started out fresh and eager to fill our coffers again. Once again, we placed our wares on the tables and people began to mill about. One lady came by to tell me she had had her first good night’s sleep in six months due to my ahuilote wine. She had been taking medicine for an irritating cough that would not go away, but after a few sips of my medicinal wine, she slept like a baby. The chief priest came along to tell me his arthritic knees felt like walking again after a good rub-down with my home brew. I was ecstatic! I was on my way to fame and fortune with a stinking berry from my tree in the back garden! I probably would put Merck & Co. and Pfizer both out of business soon. Guy and I counted the money in our cigar box and went home smiling.

The following day was a different story. The crowd that had bombarded us in the two previous days had dwindled. The lady with the cough came by to tell me her wine had turned to vinegar. I refunded her money. The priest came by to tell me his knees hurt worse than they had ever hurt and a young boy came along to tell me his pimples were worse than ever. Of course, I refunded their money, apologized, packed my vinegars, tucked my tail and went home.

Guy’s luck failed also. The sun did its number on his “angel wine.” It turned to vinegar also. As we reminisce today, Guy wishes he had kept the angels happy and left his wine at home for personal consumption. When he invites me to lunch at Hacienda Jacarandas, he knows I’ll always offer to bring the salad, since I have plenty of special vinegars for the dressing. 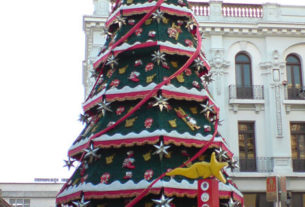