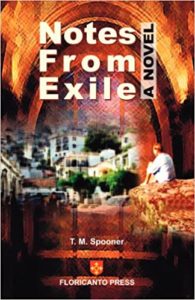 T. M. Spooner’s novel, Notes from Exile, is a lakeside story, and because it is, I feel a certain nostalgic empathy for the book. It’s hard not to considering the number of years I’d resided there and called the Chapala area my home. When the author touches on Lake Chapala during its near demise, I suffer the same frustration and sense of outrage. I’m right there with him. When he describes the mountains and the “the woman” who cradles the lake in her lap, I’m back at my window mesmerized by the quality of light that caresses her folds as the sun turns west. Those moments were unique, existential in their feel – perhaps intensified by the synergy of dying lake against eternal mountain. I couldn’t say. I don’t know what created that heightened sense of being, but whatever it was, and perhaps still exists, it makes a good backdrop for the tale the author tells.

It’s obvious that Spooner has been here and has felt that mysterious pull that holds people to this area. It’s also obvious he’s aware that people come to the lakeside for reasons other than its transcendental pull, and they are the characters who are explored in his book, from the disillusioned to the disenfranchised to the just plain curious – never forgetting that it’s a pretty cheap place to jumpstart your life or carve out a new one. The booze is cheap, the tequila is top of the line, the women are available, and the culture is gracious and accommodating. Mexico is a haven for exiles where the braver or weaker or more foolish can find themselves or re-create themselves or… lose themselves, and all this is touched on in Spooner’s book.

Everything is in place for a good story except that the characters lack depth and show little connection with the culture that their personal stories are played out against. They’re stereotypes sleepwalking through an exotic background. And they’re too self-absorbed to get more out of their unique setting than the fact that it’s unique. The men are done in broad strokes, and the women are variations on a theme of how Mexican women are perceived.

To Spooner’s credit, I will say that each of his stereotypes is different, but they all fit a predictable mold. The characters don’t have enough dimension for me to care. What’s more, even if I did, I already know where each is heading before I’ve finished the book – no surprises, no unpredictable twists of fate, no building of drama as the plot unfolds. The book is rich in foreshadowing but weak in character development. If the characters aren’t going anywhere, it’s hard to want to travel with them.

The dialogue, however, is well done – authentic for the characters he’s writing about though they don’t have much to say. They often repeat themselves and in the end, I haven’t learned or grown or had a new thought as a result of the book. Have I met characters around the lake like the ones in the book – yes. Do I really care to spend time with them – not much.

In Spooner’s favor, I found his scenes between Marta, a Mexican woman, and Max, her lover, tender and sensitively written. There was a dimension in the characters that made you interested in what happens to them, but it’s a subplot of the story. It would have been interesting to have had the author take these two where they wanted to go rather than corral them into what appears to be a tightly preconceived plot giving no breathing space for the characters to find themselves.

In the end, it’s an easy read, though it could have used a bit of editing to lighten up some of the heavy metaphors that seem forced and not totally appropriate in several places. Those living in the area will find points of recognition that make the book “user friendly,” and for those who have lived here at one time, it’s a nostalgic walk into well-known territory. For those who don’t know Mexico, it offers a somewhat superficial perspective of what this extraordinary country has to offer.

MexConnect is reader-supported. Purchases made via links on our site may, at no cost to you, earn us an affiliate commission. Learn more.
Published or Updated on: July 1, 2008 by Rita Pomade © 2008
Share This:
Tagged book-reviews Lake Chapala Rita Pomade 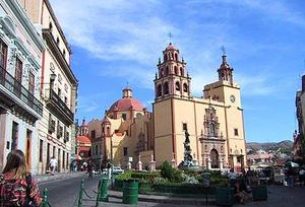