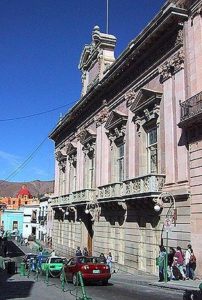 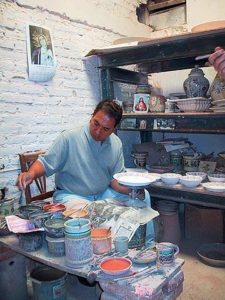 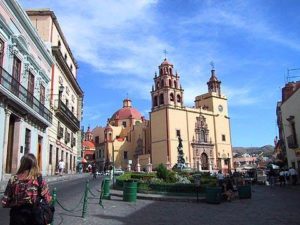 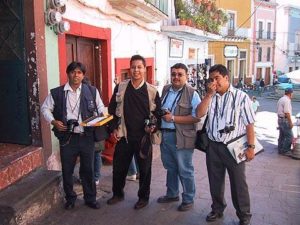 Nestled in the mountains of the Sierra de Guanajuato is the picturesque city of Guanajuato. Its name originates from the word Quanax-juato which, in the indigenous dialect of the region, meant “Place of Frogs” – because the indigenous tribes thought the place was fit only for frogs!

Little could they have known that the Spanish would later find rich veins of silver and extract from them vast fortunes to build a magnificent city and such beautiful churches as Iglesia de San Cayetano (or Valenciana, built between 1765 and 1786) on the outskirts of the city.

The Valenciana mine located here was one of the richest silver finds in history. In the 18th century this one mine alone accounted for 2/3 of the world’s silver production.

Guanajuato is a city of incredible charm, as is almost immediately obvious on entering it by way of its subterranean main street. The street (right and below, left) follows the original course of the Guanajuato River, running beneath the city for almost 3 kilometers.

The river used to flood the downtown area with alarming frequency until a dam was built in the 1960’s to contain it. This is one of only two major streets in downtown Guanajuato – this one coming into town, the other going back out.

To navigate the city, you have to go on foot. It’s criss-crossed by hundreds of callejones (alleyways), the most famous of which is, undoubtedly, Callejón del Beso (Alley of the Kiss, right). The local romantic legend has it that this callejón is so narrow that lovers, each standing on a balcony of either side of the alley, can reach across the alley and exchange a kiss! The alleyway also is part of the route of the popular traditional callejoneadas of Guanajuato when student choral groups stroll the alleyways of Guanajuato at night, strumming their guitars and serenading the local populace.

Less romantic perhaps, but of greater historical significance is the callej&oacuten (left) by which Ignacio Allende and Padre Hidalgo entered the city with their army in 1810 to confront royalist troops for the first time.

After marching from Dolores Hidalgo to San Miguel de Allende, then on to Celaya and Salamanca, they entered Guanajuato through this portal with a force of 20,000 men to engage in their first real battle against the Spanish garrison, which was holed up in a granary (Alhóndiga de Granaditas) in the center of the city. The granary was almost impossible to assault, but the ragged rebel army prevailed when Juan José de los Reyes Martínez, “El Pipila”, strapped a paving stone to his back to shield himself from the bullets of the Spanish guns, made his way to the front door of the granary and set it afire so the troops could gain entrance. A colossal statue of El Pipila stands high above the city.

Guanajuato is host each year to the International Cervantino Festival, named in honor of Miguel de Cervantes, author of “Don Quixote.” Artists from around the world perform in recitals, concerts, plays, ballet, modern dance, opera and art exhibits. Events are held throughout the city and, indeed, throughout Mexico in other cities such as Mexico City, Guadalajara and San Miguel de Allende. But the real focus of activity for the festival is the Teatro Juárez (1903, above) which faces the main plaza of downtown Guanajuato, el Jardín de la Unión. Every inch of the interior of the theater is carved, painted, sculpted or embossed in a beautiful, truly awe-inspiring display of art of the period.

There are dozens of plazas and plazuelas in the center of Guanajuato, lending it even more of a distinctive European flavor unlike that of perhaps any other Mexican city.

Exploring the city on foot offers something new to discover at each turn of a corner.

Continue Your Virtual Visit to:

Sand in my dominoes Sayulita, Nayarit 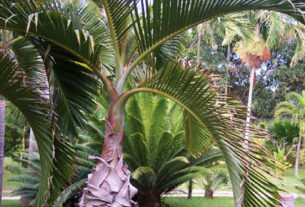