Where does one draw the line between iconoclastic satire and cynicism? It is commonly said that the purpose of satire is correction and this seems as useful an explanation as any. No matter how brutally a target is lampooned, the satirist usually has a vision of a better world created through a necessary process of social change.

The cynic, on the other hand, has not one iota of reforming zeal. In his biography of Joe McCarthy, Richard Rovere applies St. Augustine’s term — “those canine philosophers” — to individuals like the rogue senator from Wisconsin. The defining characteristic of such people is “a disbelief in the possibility of sincerity” — which would account for McCarthy being baffled when a man he had publicly labeled a traitor wouldn’t go out to a bar and drink with him after the hearings. Believing humanity to be irredeemably corrupt, the cynic nonchalantly shrugs off instances of tyranny and injustice that drive the satirist to furiously attack the repressive society generating such behavior.

Emile Zola’s caustic novels, which spotlighted a grim world of exploited miners, Paris prostitutes and alcoholism, brought against him charges that he was a cynical naysayer and even a pornographer. Yet Zola had a flaming passion for justice. At the time of the Dreyfus case, he had to flee to England to escape imprisonment following publication of J’accuse, his inflammatory open letter denouncing trumped up treason charges against the Jewish army officer.

For cynicism, we go to another French writer, Louis-Ferdinand Céline. Though a fascist and antisemite accused of wartime collaboration, Céline was just as derisive about the Germans and the Vichy government-in-exile at Sigmaringen Castle — where he served as a medical officer — as he had been about the Communists, the Popular Front and the Jews in the pre-war era. Here was a man who truly believed in nothing — yet was a great writer for his vivid imagery and raucously self-deprecating black humor.

Mariano Azuela was both a “Zola” and a “Céline” — an iconoclastic idealist and a thoroughly disillusioned figure who, happily for the reader, expressed his disenchantment with Céline-like skill. Azuela was born in Lagos de Moreno, Jalisco, in 1873. Like Céline, he was a medical doctor as well as a writer. After studying literature and medicine in Guadalajara, Azuela received his degree in 1899 and returned to Lagos de Moreno to set up practice. Mixing politics with medicine and literature, he joined Madero’s revolution against Porfirio Díaz and was named jefe político (roughly district chief) in his home town after Madero’s triumph. When Madero was overthrown and assassinated, Azuela joined the forces of Francisco Villa as a medical officer. He participated in the entire campaign against General Victoriano Huerta, the usurper who plotted Madero’s fall.

When the revolutionary quadrumvirate split into two factions — Villa- Zapata against Carranza– Obregón — Azuela remained loyal to Villa. After Villa’s defeat at the hands of Obregón, he was forced to flee to El Paso, Texas. Returning to Mexico in 1916, Azuela phased out the political part of his career but remained active in the medical and literary spheres. He organized free clinics for the poor (as did Céline), wrote novels and lectured on Mexican, French and Spanish novelists at the Colegio Nacional. In 1949, at the age of 76, he received the Premio Nacional de Artes y Ciencias (“National Arts and Sciences Prize”) from his grateful countrymen. Three years later, in Mexico City, he succumbed to a fatal heart attack.

Azuela’s first novel, María Luisa, was published in 1907, while he was still a student. This was followed by Los Fracasados (“The Failures”) 1908, Mala Yerba (literally, “Weeds” but translated as “Marcela: A Mexican Love Story”) 1909, Andrés Pérez, Maderista (“Andrés Pérez, Follower of Madero,”) 1911; and his most famous work, Los de Abajo (“The Underdogs”) 1915.

The author’s career is marked by major transitions in both subject matter and style, His earliest works depict village life and are charged with an abundance of regional color. Then came the Revolution — and a change in emphasis from the minutiae of rural life to the national struggle.

If there is one work that contains, in microcosm, both the Zola and Céline influences, it is Los de Abajo. The protagonist, Luis Cervantes, is a middle-class medical student who embraces the ideals of the Revolution and joins the Villista forces — a background identical to that of the author. The action begins in Limón, a village in southern Zacatecas. Following a dispute with don Mónico, the local political boss, an illiterate but charismatic Indian peasant farmer named Demetrio Macías goes into rebellion. Cervantes comes into the picture when he deserts the federal forces, in which he is serving as a reluctant draftee, to join Demetrio’s band. Needing a literate man at his side, Demetrio makes him his secretary. The book’s high point comes when Demetrio’s men play a glorious role in Pancho Villa’s August 1914 capture of Zacatecas, the battle that sent the tyrannical usurper Huerta scuttling into exile. In coupling a grimly realistic portrayal of events with crusading zeal against the Huerta regime’s despotism, Azuela is pure Zola.

Then Céline takes over with a vengeance. When the revolutionary alliance breaks up into savage internecine fighting, idealism goes down the drain. Demetrio, with the eloquence frequently displayed by able illiterates, puts it this way: “Villa? Carranza? Obregón? What’s the difference? I love the revolution like a volcano in eruption. I love the volcano because it’s a volcano and the revolution because it’s a revolution.” As disintegration of what was once a movement for social justice sends shock waves downward, Demetrio’s force makes the depressing transition from freedom fighters to a marauding band on an aimless odyssey of drinking, whoring and pillaging.

Ironically, the most disillusioned of Demetrio’s intimates is the ex-idealist Luis Cervantes. Where he was once Demetrio’s secretary, he now becomes his pimp. He shamelessly panders Camilla, a girl who loves him, to his chief’s lusts. As moral decay spreads, both men can muster only routine indignation when Camilla is stabbed to death by “War Paint,” a jealous ex-prostitute who was once Demetrio’s mistress. The final act of betrayal — and what pure Céline this is! — takes place when Luis, who has fled to the United States, writes a letter to his closest friend suggesting that he loot the band’s treasury and escape over the border so the pair can open a Mexican restaurant in El Paso.

After his death, Azuela was buried in the Rotunda of Illustrious Men, Mexico’s Westminster Abbey. 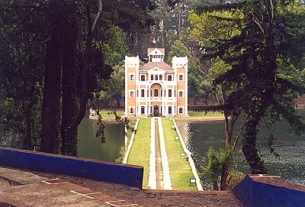 Did you know? The first Archbishop of Oaxaca: a miraculous birth and re-birth