Sunday afternoon, at about ten minutes before 4 p.m., local time, in bullrings all over Spain and Mexico, matadors kneel in arena chapels and pray to La Virgen de la Macarena to protect them.

For precisely at 4 p.m., a bugle will blow and they will go forth to meet their destiny. Moments later, a gate swings open and a two-thousand pound bull bred to kill comes charging in. The matadors stare either straight ahead or down at the dirt. Many continue to mouth silent prayers.

Earlier, following the matadors and the banderillos, have come the picadors on padded horses, lances pointed skyward. As they draw close to the barrera, they all tip their hats to the dignitaries, then slide behind the shoulder-high protective barricades that shield them off from the arena itself.

The matadors, their Trajes de Luces sparkling in the sun, confer with their managers while swinging their capes to test the wind. The banderilleros, who will be the first to test the bull, move to the opposite side of the ring and along with the senior matador, await the first bull. When the beast finally enters, the capeadores wave their capes at him, trying to incite a charge. But they must never “pass” the bull; that is for the matador only. Having watched how the bull charges, and whether he hooks left or right, the matador now moves into the ring. Now he must face the bull alone. The “corrida” has begun.

I saw my first bullfight in Mexico City in 1947. Luckily, that fight featured Fermin Espinosa and Carlos Arruza — two of the best bullfighters to ever pick up the sword and muleta. Thereafter, hopelessly hooked, I read every book I could find about La Fiesta Brava. I attended the bullfights again in 1952 in Mexico City, and later in Acapulco. Slowly I began to realize that the sport was not only a contest between man and bull; more dramatically, it was the epitome of a more universal struggle: man’s conquest of his own fears.

Once, I was able to get into the callejon — the tight circular alley that runs around the ring, and normally off-limits to all but the bullfighters. Seen up close, the matadors appeared very nervous, as they looked over at the gate whence the bulls would come. I now understood why the entryway was called “The Gate of Fear.”

It was on a trip, in 1960 that I first heard about a young man named John Fulton. From Philadelphia, Fulton was working as a novillero, hoping someday to become a full-fledged matador. Some seven years later, I heard that Fulton had been “confirmed” in Madrid, the first American bullfighter to reach such a height. Yet when I returned to Spain in 1978, there was no mention of Fulton on any of the corrida cards.

In 1983, however, we finally found John Fulton in Sevilla. Now an established painter with his own gallery, he had also written several books. I asked him a few questions that had long been on my mind.

‘Matador,” I said (always until the day he dies, a bullfighter is addressed that way), “Is it true that all bullfighters live in continual fear?”

Yes, both before and after the fight. But we are not afraid of the bull. We are afraid we will fail.”

“But you must have some fear in the arena itself.”

“True, but our pride and even our anger, pushes it away.”

“Pride and anger?” I asked.

“Pride because we are watched by other Matadors, as well as our cuadrilla. Anger because sometimes we get mad at the bull if he is a bad bull.”

“They do not matter. Most of them do not understand. All they want is blood. We must satisfy ourselves, not the crowd.”

I understood what John Fulton was saying. It had been the same for me in the Marine Corps during World War II. The fear of showing fear, along with my festering anger, had allowed me in battle to ignore danger. But before and after was another story…

Later, John told me that he had decided to become a bull fighter while studying art in San Miguel de Allende. Dropping his real last name of Short because Mexicans couldn’t pronounce it properly, he began to fight up along the border as a novillero. And because he was a novelty, Americans crossed the river to watch him. Over the next few years, John fought constantly, perfecting his skills.

However, when he went to Spain in 1956, things changed. Though no one denied his skills, contracts were few and far between. Luckily, John was a talented artist and able to survive financially.

Through sheer perseverance he finally became a full-fledged matador, then went on to fight the bulls for the next 14 years.

By 1983, he was 51, yet still had not retired from the ring. By now, though, he was a well-established artist. His days as a matador seemed over.

But in April of 1994, and now in his early sixties, John returned to San Miguel de Allende where he fought two bulls, cut two ears, and then cut his own pigtail – at last retiring from the ring.

A final footnote — Many Americans regard bullfights as brutal and inhuman. True aficionados, however, appreciate the great courage and enormous skill needed to face down an animal with the killer instincts of a fighting bull. In the final analysis, the drama playing out in the arena is not about the matador triumphing over the bull, but rather over himself. And who among us cannot respond to such a noble quest? So while we all may not approve of the bloody spectacle that is La Fiesta Brava, we must salute that solitary figure who opens each Sunday’s ritual standing utterly alone in the arena, challenging his fate with no more than a cape in his hand.

Published or Updated on: May 1, 1997 by Shep Lenchek © 1997
Share This:
Tagged fiestas-traditions Shep Lenchek sport 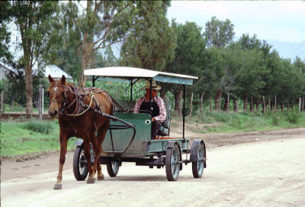 The Mennonites: a Dutch heritage in Mexico