In Part One, we looked briefly at the origins of Huichol religious and commercial art, in particular the yarn or bead paintings. The Norwegian explorer and ethnographer Carl Lumholtz left us detailed descriptions of Huichol art as he found it between 1890 and 1898. We are thus able to compare original Huichol symbolic and decorative art with what we see on the market today. Comparison of his descriptions with current Huichol art shows that the Huichol artisans are even more prolific and diverse now than they were in Lumholtz’s day.

For years, many people have been predicting the ultimate demise of the Huichol (wii-zaari-taari) as a linguistic and cultural entity. This has not happened. They were first contacted by the Spaniards around 1530. After several uprisings and clashes with the Spaniards, they withdrew farther into the remote Sierras in the northern part of Jalisco, touching on Zacatecas, Durango, and Jalisco, Although many live near main community and religious centres, such as San Andres, Santa Catarina, and San Sebastian, most live in hundreds of small ranchos scattered throughout the Sierras.

A few years ago I attended a peyote fiesta in Las Guyabas. Afterwards, I flew out of San Andres in a light aircraft and had an opportunity to view the Huichol sierra from the air. The plane was so small I could look out both side windows at the same time. From this vantage point I could see small ranchos, some deep down in valleys, others perched precariously on mountain crests. The “Conquistadores” never conquered the Huichol because the terrain was too difficult and there was nothing there the Spaniards wanted. At one point in the flight, the pilot landed at a Huichol rancho located high on a mountain ridge where there was barely enough room to land and take off. The plane continued to taxi on the rough gravel runway while one Huichol passenger jumped out and two more took his place. In a matter of minutes we were back in the air over the high Sierras.

To understand the significance of Huichol art, one must understand the environment that has enabled the majority of Huichols to survive centuries of European oppression and still continue to produce their art. Traditional Huichol art forms were handed down from generation to generation, but they have changed in stylistic expression with the introduction of new materials, such as glass beads, metal, and commercial dyes. The early Huichol artisans used materials available from nature, such as clay, stone, and vegetable dyes. With the introduction of commercial or manufactured goods, they have been able to produce more elaborate designs and brighter colours, along with greater expansion and flexibility in artistic concepts and execution. However, Huichol art can still be considered traditional or “authentic.”

Huichol beadwork, for example, did not begin with the importation of manufactured glass beads. The technique was in place long before the arrival of the Spaniards. Originally artisans used beads made of bone, clay, stone, coral, turquoise, pyrite, jade, and seeds. In 1898, Lumholtz described Huichol earrings, necklaces, bracelets, anklets, etc. made by intertwining strings of beads. Current bead paintings are a simply a new stylistic development, an extension of the original art forms.

As comprehensive and as accurate as Lumholtz was in his description of early Huichol art, his labelling of certain items has caused some confusion. He named certain round ceremonial objects “frontal shields ” (Escudos Frontales, Neali’ka) and diamond-shaped or rectangular figures “the eyes” (Los Ojos, Si’kuli). The Nearika (Neali’ka is a dialectal variation), however, was in part the inspiration for the later yarn paintings, what the Huichols call nearikas. Originally they were small rectangular or round tablets, usually made of native wood, which were placed in shrines and sacred places as offerings. Originally scratched onto disks or made of bamboo splints, they represent the face of a person, sun, earth, etc. Today many traditional yarn paintings still show the round face of Tau, the Sun, in the middle. Further, by classifying the nearikas as “Los Ojos (Si’kuli),” Lumholtz popularized an incorrect name for the well-known so-called “Eyes of God,” the Huichol cross, usually with four small woven pieces at the cardinal points and one in the centre. The term si’kuli actually refers to the entire cross, which is a complex symbol with many meanings, spanning both the living and the dead. Lumholtz, however, was correct in identifying the use of the “eye” in the Fiesta of the Green Calabashes as a sacred symbol to protect the children.

The commercial or monetary value of Huichol art depends on whether you are a Huichol, a customer, or an entrepreneur. One internet listing describes a “Huichol Eye of God~Ojo de Dios, Jalisco, Mexico (Rare)” as a “pre-1980 item” (the significance of the date escapes me). This particular “original Huichol cross” is said to have been bought from a “Shamanistic family from the Highlands of Jalisco, etc.” It is listed at $1,500 at a New York address! I can imagine how much the “Shamanistic family” got for it.

Exploitation of native peoples is of course nothing new. It has been going on for centuries and shows little sign of abating in certain quarters. For example, some time ago an American came to me with a beaded bracelet he had bought from a fashionable shop in Ajijic (which I shall refrain from naming) and wanted to know the value of it. He paid hundreds of pesos for the bracelet at the store but then discovered the same thing at the local tianguis (weekly market) for a few pesos. When I investigated the shop in question, the owner assured me that the beads used to make that particular bracelet were a special Italian brand. When I pointed out that Jose Luis, a Huichol friend of mine, made similar bracelets out of the same beads using the same patterns, the shop owner and I got into a heated discussion about Huichol art and designs. The irate proprietor threatened to “sue” the Huichols for stealing these supposedly “unique” designs — as if one could patent a symbolic or decorative design that originated with the Indians! The discussion became so heated I had to leave the shop in a hurry. Later investigation revealed that another “middleman” was involved in obtaining Huichol art at a very low price and selling it abroad for highly inflated prices. At that time Huichol art was just beginning to be more widely known and sold for thousands of dollars in expensive boutiques in major cities, such as New York, London, and Paris. The Huichols of course never saw any of these profits. I never again attempted any personal investigation of the exploiters or their methods.

On one occasion a Huichol friend visited me at my home. I showed him some very early photos from Lumholtz’s Unknown Mexico. When we came to a photo of some Huichols whom Lumholtz had photographed during his visit over a century ago, my friend identified his great-grandfather. The contrast between the way the Huichols dressed back then compared with the way Huichol men dress today was more than obvious to both of us.

In 1992 my friend Gregorio (now deceased), a marakame (shaman-priest) from San Andres, delivered a speech in front of the calihuey (god house) of San Andres Cohamiata during the time of the Peyote Fiesta and the celebration of 500 years of indigenous survival since the so-called “discovery” of the New World by Columbus in 1492. This is part of his speech, which I translated from the Spanish version taken from the original Huichol.

“Our ancient ancestors carried out our traditions most completely. They painted themselves with natural pigments, with copal, and with ground up avocados. They painted their faces black with the soot and smoke from the comal, with that they painted themselves. They used nopal, cactus, and cotton. Our ancestors left us with various things. The clothes they wore were made of wool. They did not wear pants, only long woolen shirts. Nowadays there are many more materials available and we dress much more elegantly. But everything remains as it was.”

The continuation and development of Huichol art today is a symbol of the survival of the Huichol in the modern world of crass commercialization and lost values. In the next issue we shall continue our survey of Huichol symbolic and decorative art. 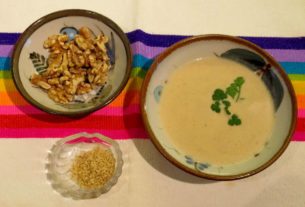 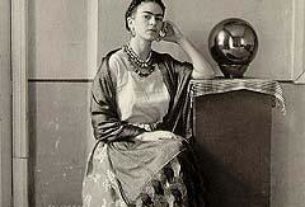