Coffee, that fragrant morning eye-opener, is considered a daily necessity by millions of people. The degree of that necessity is reflected in the fact that coffee is the second largest legally traded commodity in the world, after oil. The United States is its biggest consumer, downing a whopping twenty percent of all coffee sold in the global market, and the chief supplier of coffee to the U.S. is Mexico.

With well over 300,000 growers in twelve states, the Mexican coffee industry employs more than three million people, and in some rural areas a full one quarter of the population is involved in coffee production. Since its introduction into Mexico in the late eighteenth century, coffee has become an important aspect of economic, cultural and social life. It flavors a variety of Mexico’s most beloved drinks, from the cinnamon-infused café de olla to the Kahlua that is synonymous with Mexican liqueur. It is also the signature ingredient in a number of delicious desserts, including the coffee flan of Veracruz.

The first plants of Coffea Arabica were brought to Mexico from Jamaica in 1796, after a long and colorful history in other countries, including Ethiopia, home of the original coffee plants. There are many tales concerning its beginnings as beverage and stimulant, the most popular being the tale of a goatherd who noticed a marked rise in the energy level of his goats after they had nibbled on the plant’s berries. Possibly needing a pick-me-up himself, he boiled them in water, drank the resulting liquid and, so the story goes, coffee consumption began. Coffee houses began cropping up in southern Arabia in the 1400s and, within a century, they were popular all over Europe.

Planting coffee in Mexico made it readily available to the Spanish colonists as well as providing a source of income. The combination of moisture and altitude required by coffee were present in several southern regions of the country. The colonial hacienda owners, who relied on the peasants living on their estates to cultivate the crop, reaped large profits.

Unfortunately, the people working the land did not benefit from this economic gain. During the porfiriato in the late 1800s, Mexico’s then-president, Porfirio Díaz, gave huge financial incentives and technical help to international coffee companies. American, French, German and Spanish businesses came to dominate the Mexican coffee industry. By the 1980s, the small Mexican coffee farmer was barely able to harvest his crop, and sometimes could not even do that.

It is only in recent years that the small coffee farmers have begun to form cooperatives, and the rising market demand for organically grown coffee may well prove to be their economic salvation. Ironically, it was because they had grown so poor that they could no longer afford chemical fertilizers that they returned to the old, organic traditions. The growing methods of their grandfathers, for many years pushed aside by the use of chemical additives, have given rise to the SHG (Strictly High Grown) certified organic coffee from the highlands of Veracruz, Oaxaca and Chiapas, with some production in the Sierra region of Puebla. Grown without the additives used in mass cultivation, these coffees are said to retain the integrity of true coffee flavor.

Whether this is entirely true of organic coffee or not, the fact remains that taste can suffer when coffee is composed of beans that come from many different sources, and coffee produced in a small area retains its character. Thus, when the coffee beans of the Pluma Hidalgo region of Oaxaca, in the misty highlands between the central valleys and the coast, are described as having undertones of chocolate, and even of almonds, it is because their character has not been altered by being blended with coffee beans from other regions. Maybe this is why Ben and Jerry’s uses coffee from the Cien Años de Soledad — One Hundred Years of Solitude — coffee cooperative in Pluma Hidalgo to flavor their ice cream.)

Coffee grown in the highlands has the acidity that lowland coffee lacks, the quality that gives coffee its bright, dry taste. Altura Coatepec, from the volcanic slopes of eastern Veracruz state, is considered by most coffee connoisseurs to be the gold standard of Mexican coffee. A trip to Coatepec is highly recommended for coffee lovers visiting Veracruz. There is plenty of coffee tasting, all from different small estates, a coffee museum, and coffee wood items for sale in shops. (And while there, try some of Coatepec’s famous fruit liqueurs and its wonderful seafood restaurants.)

While it is true that an uncomplicated taste and low acidity are characteristic of many Mexican lowland coffees, considered suitable only as a base for blends, this does not apply to the country’s cafés de altura. Here, the coffee is grown under specifically selected shade trees, providing not only protection from the sun, but natural soil enrichment as the trees lose their leaves and, in most cases, pods. Trees with pods, such as the chalahuite — botanically, Inga edulis — known in English as the “ice cream tree,” are favored for planting in coffee fincas because in losing their pods they add more organic material to the soil. Under the coffee plants, herbs are grown to prevent soil erosion. With characteristic Mexican practicality, the farmers plant only herbs that can be used for food or medicine.

Classified in the rubiacee family (related to gardenia), coffee can grow up to twelve meters in the wilds of subtropical Africa, but is typically grown to about five meters when cultivated, making it easier to harvest. The road into Xico, Veracruz from Coatepec is lined with coffee trees, and the farmers go along hand picking only the ripest red berries, harvesting the rest only after they are ready. These berries, or cherries as they are sometimes called, are the fruit of the tree, and the “beans” are the seeds inside the fruit, with two seeds to each berry.

Once picked, the coffee berries are either “dry processed” or “wet processed” fairly quickly, to prevent fermentation of the pulp. Dry processing involves spreading the berries out in the sun on large patios to dry, turning them frequently, and removing the pulp, usually by hand, once it is dry. In wet processing, the beans are put through a series of water baths to soften the pulp, which is then removed.

Once the pulp has been removed, the beans can be roasted, a process in which the heat changes their color from green to yellow to light brown and, in the case of longer roasting, dark brown. Light roasts are generally preferred for beans from a certain region, since this preserves the “origin flavor.” Dark roasting makes the beans take on a “roast” flavor, making one coffee less distinguishable from another. Until the 1900s, people roasted the green coffee beans at home in a frying pan or oven, but today there are numerous specialized ovens for home roasting, many of them sold on the Internet.

Grinding coffee beans just prior to brewing is the optimum method for producing a good cup of coffee. Those who do not wish to do that can have the beans ground where purchased, but should buy only enough for a short period of time. After two weeks, the coffee will lose its flavor, and during that time should be kept in an airtight container away from light and heat. For anything more than two weeks, and up to six months, store it in the freezer.

Those who drink decaffeinated coffee should be aware that this is achieved in two different ways. The European method uses methelene chloride to absorb the caffeine from the beans, and the Swiss water process uses steam to decaffeinate. The former involves a chemical process distasteful to some people, while the latter removes some of the essential oils, and thus diminishes flavor.

Although decaffeinated coffee is available in Mexico, it is not in great demand. Mexicans tend to drink their coffee later in the day than other North Americans, and frequently enjoy it late at night. It is common to see people at cafes and small restaurants having coffee with cena — late supper. The cinnamon flavored café de olla is particularly popular at night. So is a drink called “Café Pancho Villa,” which is simply tequila-laced coffee.

Coffee is also used in desserts like the following, and is a good flavor choice to round off a Mexican meal, since it is available everywhere, even in places where some of the characteristic Mexican dessert ingredients, like tropical fruits, are unavailable. 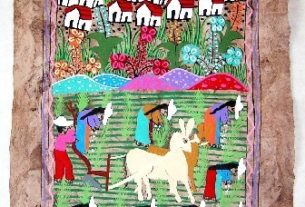 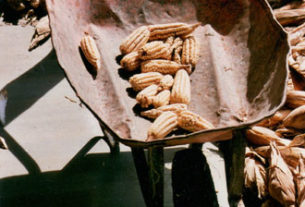 Corn, beans and squash: the life cycle of the milpa