If you are a very lucky person, somebody in your family marries into a Mexican family and you end up with an abundance of diversified riches in your life.

Your home rings with laughter in at least two languages, your walls shout happy in vibrant colors, and your comfort zone is extended by thousands of miles.

And, contrary to what you may have read, you also contribute mightily to the economy of the United States of America.

What I mean by this is that my beautiful daughter-in-law, about whom I write frequently for this publication, brought with her a dowry far more valuable than bling — she brought her affectionate and generous family.

If, by now, you are wondering how these friendly people happened to save the U.S. economy, I’m about to tell you.

First, you are doubtless aware of the negative media attention that has been paid to the Mexican workers who send their hard-earned paychecks back home to Mexico to feed their families, right?

And you must also be aware that the good citizens of the U.S. largely believe what they read, even though their common sense might be telling them something different, right?

Well, my daughter-in-law’s mother, grandmother, and one of her aunts, are here in California as I write this. Why? Because they wish to buy, buy, buy.

They came here on a three-day shopping spree, buying everything in stores ranging from Kmart to Nordstrom, Baby Gap to Bloomingdale’s, Circuit City to Leslie’s Pool Supply. They bought clothes for their relatives and friends in Mexico City, toys for the children of their relatives, supplies for their swimming pool business in a suburb of D.F.

They bought tools, toys, telescopes, and just about everything except prescription drugs; they don’t want to be overcharged any more than we do.

The first clue that a major buying binge was about to go into action was the empty luggage they came with. For three women, there was but one small bag holding everything they needed for themselves. It’s amazing how lovely they all looked, how prepared they were for all weather, and how they seemed to have so many outfits. How they managed to squeeze everything into that one carry-on bag, will puzzle me for years to come. Trying to figure that out without actually asking them is part of the fun. That they know I don’t know is another perk.

I’d especially like to figure out how so many bright white, starched, hand-embroidered blouses could be unpacked with nary a wrinkle.

The rest of their luggage, the part that went into the belly of the plane, arrived empty, ready to be filled with U.S. purchases. Since various branches of the family visit the U.S. frequently, airport security is probably no longer surprised by all their empty suitcases. If members of congress don’t have to go through security and it’s their fault that we have such great national debt, I don’t see why my son’s in-laws shouldn’t get the same privilege, since they are single-handedly paying off that same national debt.

At least one or two zeros can be deleted from the bazillions of dollars we owe whomever it is we borrow from. When the Mexican branch of the family visits, the national debt lowers and the gross national product increases by 38 percent.

Instead of building a wall and telling Mexicans to get out, we should build a bridge to help them get in. 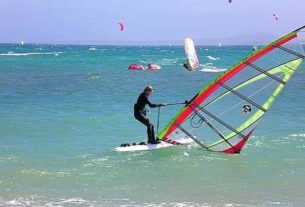 Part one – La Paz and El Triunfo: from beaches and baskets to mines, music and marine park