Last month’s article traced the origins of Mexico’s street tacos and presented information on the street stands themselves and the condiments they offer, as well as giving some tips on how to go about selecting a place to eat. The “morning” tacos de canasta, cabeza and barbacoa, sold until about noon, were described. This month’s column will discuss the tacos sold at night, which are the majority.

From noon until about six there are almost no tacos available; morning vendors are closed until the next day. Right around dusk, however, there is a perceptible change in the atmosphere of the street following the afternoon lull. Permanent puestos, stalls and storefront taquerías begin opening, and ambulatory taco carts roll into place, usually connecting the wires from their naked light bulbs into overhead lines.

The most compelling signal of “taco time”, however, is the aroma. Of all the street food in Mexico, the taco is King of the Night, attracting clients with the appetizing scent of grilled, fried or steamed meat. Since the big meal of the day is eaten in the afternoon, many people opt for a late supper, or cena, and taquerías usually stay open until about midnight, and later in big cities. On weekends, taquerías near discos and clubs stay open until the wee hours of the morning, when they provide welcome sustenance to hungry partygoers.

The following types of nighttime tacos are distinguished from each other, and listed below, by the method of cooking the meat, as well as the type of meat used. 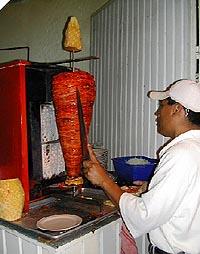 Literally meaning “shepherd’s-style tacos”, these are a Mexican adaptation of Middle-Eastern spit-grilled meat, brought by immigrants from Lebanon. Although originally made with lamb, most are now made with thinly sliced pork, marinated in herbs and spices, and stacked on a vertical spit in the form of a trompo, or “top”, so called because of its resemblance to a child’s toy top, with the narrow end on the bottom and a slice of pineapple at the top. The meat is turned in front of a vertical gas flame, shaved off as the outside gets done, and made into tacos. In Puebla, where there is a large Lebanese population, a variation of this type of taco, served in a thick flour tortilla called pan arabe – a cross between a tortilla and pita bread – is known as tacos arabes. They are served with a spicy, deep-red chipotle-based salsa.

Originally a specialty of Michoacan and Jalisco, now found in nearly every part of Mexico, these tacos are made from pork that has been cut up and cooked in lard with orange rind, which gives the carnitas a lovely deep golden brown color. The different “porky parts” are displayed in a glass case resembling an aquarium and kept warm by a heat lamp. The customer tells the taquero his choice or simply points to the desired part, which is removed, placed on the chopping block, and cut into bite-size pieces. Different parts of the pig have their devoted fans, and people order very specific cuts or combinations. The general preference of foreign visitors seems to be maciza, which is simply boneless meat. Costilla(ribs) and cuerito (skin) are also popular, as are buche (cheeks), higado (liver) and corazon (heart.) Die-hard aficionados often get a lot more exotic, ordering trompa (snout), oreja (ears), and nana (uterus.) Then there are the “combinations”, such as nenepil – a mix of cheek and uterus – and chanfaina, a lung, liver and heart combo. They shouldn’t be knocked until they’re tried, and it can be unequivocally stated that no part of the pig goes to waste in Mexico.

Also called tacos de carne asada, these originated in the northwestern state of Sonora, where the meat is grilled over mesquite coals by taqueros who sometimes wear white uniforms and chef’s caps. Thin slices of beef are grilled quickly, removed to the chopping block, cut up and stuffed into tortillas. While flour tortillas are most common in northern Mexico, most taqueros at al carbon stands will ask the client whether flour or corn tortillas are preferred. Grilled scallions or green onions are also grilled, to be served with the tacos. Stands selling this type of taco always have a table of garnishes including sliced cucumbers, radishes, red and green salsas, lime wedges, and thin guacamole.

This term, as its name implies, refers to tacos made with fried meat. Just as the vendor of carnitas has his heated glass case and the carne asada chef his grill, the taqueros who sell fritanga have their own specialized cooking utensil. The charola is a metal pan with a center well about 4” deep, where the meat is fried, and a wide, flat lip where fried meat is placed after being removed from the cooking fat. Suadero (fried breast bone meat), chorizo and longaniza are among the most popular fried meats for these tacos. Machitos (lamb testicles) and moronga (blood sausage) are also offered. The fresh, clean taste of chopped cilantro is particularly suited to this type of taco, as are the chopped onions and extra-hot salsas served with them.

The cazuela is the clay pot in which Mexican guisados, or stews, are cooked, and since they vary significantly from one part of the country to another, these are perhaps the most regional of tacos. Offerings may include guisados of beef, lamb, pork, goat, chicken, duck or turkey, depending on what is abundant in the region. Vegetables such as nopales, mushrooms, and squash blossoms are often found in the guisados, which usually include some type of fresh or dried chile. More regional variations may include seafood, grasshoppers and iguana.

Also called taquitos or flautas, these differ from other kinds of tacos in that they are rolled around a filling and fried until hard, rather than being made with soft tortillas folded around the filling. Tacos dorados are usually filled with shredded, cooked chicken or beef. They are topped with shredded lettuce, salsa, crema and grated cheese.

These are the popular “fish tacos” of Baja California and the Pacific coast, which have become very popular with foreigners in recent years. Batter-dipped and fried filets of the day’s catch are served in a choice of corn or wheat tortillas. A table of garnishes always includes vinegar-marinated onion rings, shredded cabbage salad, guacamole and salsas.

Mexico Matinee: The Country in Film 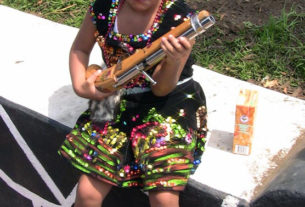