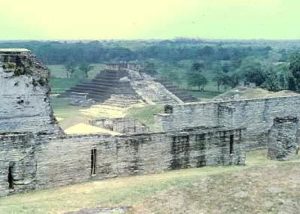 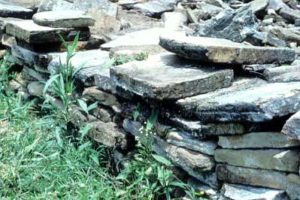 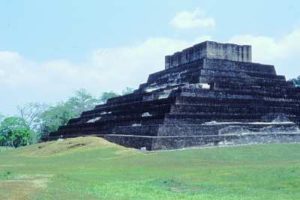 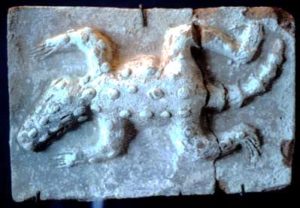 I’ve always tried to maintain an open-minded attitude towards history, but even I was incredulous when I first heard this suggestion. And you certainly won’t find it in most history books!  Could it possibly be true?

The evidence comes from the Mayan site at Comalcalco, in the swampy Gulf coast state of Tabasco. Comalcalco (“in the house of the comals”; comals are the pans used to cook tortillas) is the westernmost Mayan site known to archaeologists. The site has stepped pyramids and numerous other constructions. Only when you get close do you realize that Comalcalco is very different to other Mayan sites.

Virtually all other Mayan sites are built using carefully-hewn blocks of limestone, the commonest building stone on the Yucatan peninsula. However, Comalcalco is unique; its pyramids are built of bricks. No limestone outcrops near Comalcalco, so the local Maya employed an entirely different strategy in building the site. They learned how to shape the local clay into bricks and then fire it into “tabiques” (fired bricks). The site has more than 300 distinct constructions, almost all built of bricks: hundreds of thousands of tabiques, held together by a mortar made mainly from oyster shells.

I visited it only because I wanted to see exactly what a brick-built pyramid looked like close up. I was impressed by the workmanship, and marveled at the organization required to build such a site. What I did not realize until many years later was that Comalcalco held another massive secret. (Now, I really want to go back again!)

Archaeologists working to restore the site discovered that many of the bricks had inscriptions on them. These inscriptions had been invisible, hidden from view, while the bricks had been set in mortar. Dislodged bricks, and those removed for resetting as part of the restoration process, often bore mysterious symbols or inscriptions. In some cases, the brick makers’ fingerprints were still clearly visible.

Neil Steede, an archaeologist working on the site, studied almost 5,000 bricks, and photographed the inscriptions he found on about 1,500 of them. Most of the symbols or inscriptions have been interpreted as masons’ signs. The really curious thing is that these marks turn out to be virtually identical to the masons’ marks used by the Romans, half a world away. Steede was led to the astonishing conclusion that, “The illustrated bricks of Comalcalco are pieces to a grand puzzle, whose completed, final image may reveal a Roman Christian presence in the Americas a thousand years before the arrival of Columbus.” 1

The diagram compares some of the marks found at Comalcalco (on the right) with those found at Roman sites (on the left). The similarities are truly amazing! 2

Some researchers have also claimed that the dimensions of the bricks (more like flat tiles than conventional bricks) and some of the architectural details are more Roman than Mayan. Any Roman connection to the Americas would pre-date Columbus by a thousand years.

Proponents of early contacts from across the Atlantic claim that the Indian Satavahana Dynasty, dating from about 200 BC to 200 AD, had developed extensive trade connections with Rome, and that Brahmi script soon reached Comalcalco. The technology to make kiln-fired bricks appears to be similar in parts of South East Asia and Comalcalco. As further support, they cite the urn burials found at Comalcalco, which they claim were virtually contemporary with similar burials in India.

Evidence from the inscribed bricks shows that when the site was at its peak, during Classic times, it was a close ally of (or possibly controlled by) the powerful Mayan leaders residing at Palenque. Artifacts found at Comalcalco suggest additional links to Mayan sites as far away as Tikal (in Guatemala).

Visitors today do not see the site as it looked in Mayan times. The Chontal Maya who built Comalcalco covered the exterior surfaces of all the bricks with stucco; remnants of the original stucco can still be seen in some places. Then, for further decoration, they carved ornate reliefs into the stucco, so the site would have been far more colorful then than it looks now.

Clyde Winters and Neil Steede explored the iconography of the symbols carved in Comalcalco bricks in some detail. Winters, an expert on Olmec script, which pre-dates the rise of the Maya, quickly recognized that one particular brick (T1 452 R16) was very special, since it had both Olmec and Maya script side by side. 3 Winters translated the Olmec script, and Steede worked on the Maya script, independently, before comparing notes. Their work showed that the two scripts told the same tale. The left hand side was essentially a translation of the right hand side; the brick was bilingual!

After examining many more bricks from the site, Winters came to believe that Comalcalco may well have been the Mayan equivalent of a trade school, where scribes learned Mayan writing (translating Olmec glyphs), and (perhaps) where construction crews practised their building techniques.

I have absolutely no idea what the truth is, but Comalcalco has me enthralled. Its bricks may eventually reveal far more stories than we ever thought possible. The secrets of its master masons may yet come back to life!

How to Get There / Where to stay

The small town of Comalcalco is 60 kilometers (45 miles) northwest of Villahermosa. By car, travel Highway 190 west to Cárdenas, and then take Highway 187 north (towards Paraíso). Comalcalco is a lively farming town. For overnight stays, try the Hotel Copacabana. Alternatively, visit Comalcalco as a day trip from the state capital of Villahermosa, where there are numerous excellent hotels.

The archaeological site of Comalcalco is about three kilometers beyond the town. The small site museum is well worth visiting; look for the pair of water pipes (unique to Comalcalco), as well as for carved figurines and heads that portray features such as beards and hats, not usually associated with Mayan iconography. The DeLanges have taken some great pictures of exhibits in the site museum (link by kind courtesy of Audrey and George DeLange).

For more photos of the site.

This article is the basis for Chapter 6 in the author’s Mexican Kaleidoscope: myths, mysteries and mystique (Sombrero Books, 2016).

Text and Photos (unless otherwise credited) © Copyright 2007 by Tony Burton. All rights reserved.