“If you’ve ever traveled the mainland side of the Sea of Cortez, just south of the town of El Golfo de Santa Clara, you may have had lunch at a beach restaurant called “Johnny’s Place,” which is located on a long stretch of sand known as “Johnny’s Beach.” You might have wondered about the name; after all the name Johnny doesn’t sound very Mexican, now does it? Well, it turns out that Johnny’s Beach was named after me! Let me explain.

Back in 1963, I bought a new 4-wheel drive International Scout and got into off-road adventures. Naturally, Baja became my playground, and I managed to squeeze in an extra-long weekend once a month to explore the roadless wastes. Nothing was paved south of Ensenada in those wonderful days.

After many miles exploring the mountains and deserts of Baja, I decided to toodle over to the mainland to see what was happening there. Before long I found myself zipping along a newly paved highway south of San Luis, headed for a place noted on the map as El Golfo. Curiously, the map didn’t show a road here. Suddenly, the pavement came to a halt smack in the middle of the desert. Now I knew why there was no road on the map; it was still under construction. No problem, I dropped into four-wheel-drive and took off, grinding out my own trail over treacherous sand dunes and bouncing through steep canyons.

Several hours later, the little fishing village of El Golfo appeared before my weary eyes. In those days it was just a dozen or so adobe houses and one bar. I pulled up in front of the bar and wondered if they had cold beer. The villagers flocked around, curious as to who I was and how I arrived. “The road washed away a month ago,” they exclaimed, “How did you get here?” This miracle seemed to call for a celebration, so when I went inside to have a beer, almost the entire town squeezed into the bar to join me.

“Why are you here?” they asked. “Why would you drive through the desert to get here?” “What is your name?”

I explained that my name is John, or Juan. Before long they were calling me Juanito, or Johnny. But explaining why I would leave the comfortable, paved highways of Califa to traipse through the Sonoran desert was difficult. People who work ten hours a day, seven days a week, have trouble with the concept of leisure time, or hobby. The closest I could come was adventure. We all had more beer, with the fishermen toasting to las aventuras de Juanito, or “Johnny’s adventures.” This went on for some time into the night, with newcomers being informed of “las aventuras de juanito.” Since I was buying the beer (at a civilized price of 25 cents a bottle), the celebration lasted into the wee hours of the morning.

One of the celebrants was the chief engineer of the road construction project. He bought a round of drinks and told me of his work. In addition to building the road, he confided that he was also surveying some property which he was going to claim as his and build a large resort hotel there. The property included several miles of deserted beach. According to him, this would be the beginning of the next Acapulco. The next day, I bid adios to my friends, declining an offer of more beer and another celebration.

About a year later, I received a letter from my engineer friend. He insisted that I visit him in El Golfo; he had a surprise for me. He not only had a surprise, but he promised to bring a hooker from San Luis as an added enticement to make sure I came to visit. I might have accepted his invitation were it not for my wife’s none too subtle hint that this would not be a good plan. Reluctantly, I declined. He followed up with another urgent letter, saying I had to come, that he would bring six girls if one wasn’t enough. This did surprisingly little to soften my my wife’s opinion of the trip.

About six or seven years later I happened to be in the region, and decided to drop in on El Golfo. The paved road had changed it incredibly. It was no longer a village, but a small town. As I approached the outskirts, I saw a large sign advertising a resort called “Las Aventuras de Juanito.” Throughout the town were signs with arrows pointing toward “Johnny’s Beach” and “Johnny’s Hotel.” I followed the signs to Johnny’s Beach and saw where my friend had indeed started to build a resort, but he obviously ran out of money before getting very far. A few crumbling buildings and foundations indicated where the “new Acapulco” might have been. The only things standing were a restaurant called Johnny’s Place, plus a couple of sad-looking motel units which were already falling apart.

When I last visited El Golfo de Santa Clara a few years ago, I asked local people if anyone knew how Johnny’s Beach got its name. The replies were a shaking of heads. “No, señor. No one knows why the developer picked that name.”

Well my wife knew. And that’s why I didn’t get to attend the grand opening of my namesake resort. She was probably right though, six girls might have been a little much. 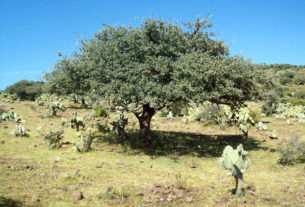