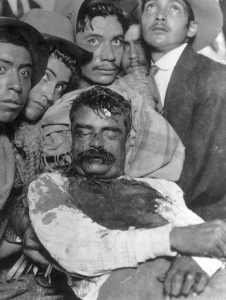 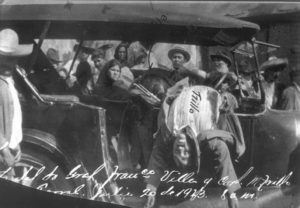 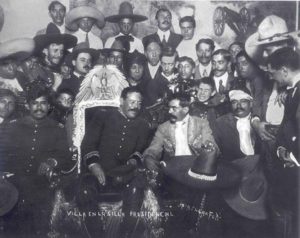 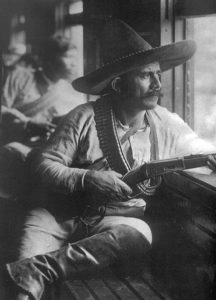 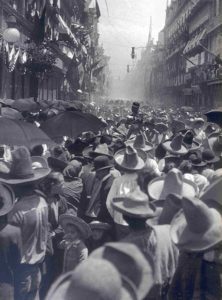 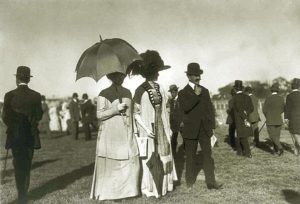 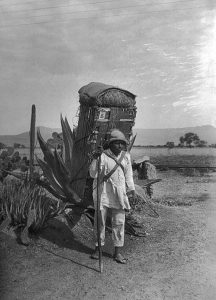 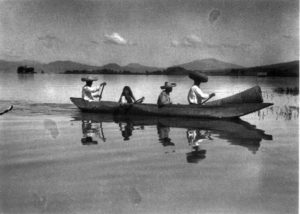 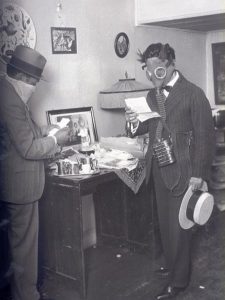 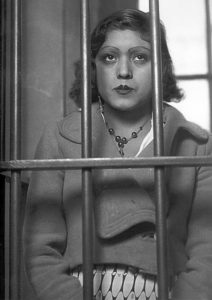 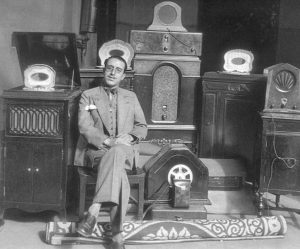 Agustín Victor Casasola was not a painter or a poet or one of the many intellectuals or revolutionaries during the early decades of the twentieth century who consciously strove to forge a Mexican identity. Yet, as witness and recorder of those tumultuous years, his influence was as great and may prove to be more lasting.

There is no medium that has greater immediacy than the photograph. And as such, it has great power. Whether Casasola knew this intuitively or intellectually doesn’t matter. What does matter is that he left a legacy to the people of his country that has etched in the minds of every Mexican, a visceral connection to whom they were at the rebirth of their nation. And he has assured future generations of Mexican that their past will never fall into oblivion.

It’s interesting that he never thought of himself as an “art” photographer like Edward Weston or Manuel Alvarez Bravo, two men who sought to capture the face of Mexico and whose work he would have certainly known at the time. He saw himself as a journalist first — a man who took pictures to tell a story. Yet, many of his photographs transcend the craft of photojournalism and reach the level of art. In this respect, he is reminiscent of the great “Life Magazine” photographer W. Eugene Smith whose photographs not only told a story, but captured a depth and humanity beyond the impersonal image.

Agustin Victor Casasola was born in Mexico City on July 28,1874. His father died when he was six years old, and the family’s financial situation didn’t permit him to pursue higher education. He apprenticed himself at a young age to a typographer. Typography demands precision, a sense of form and style, and an understanding of the need to communicate. This early training served him well in his later incarnation as a photographer.

By the time he was twenty years old he had moved from setting type to writing stories and became a reporter for El Imparcial, one of the official newspapers of the Porfirio Díaz regime. By the end of the century he had moved into photojournalism.

He couldn’t have been better placed in history. The early 1900s brought great innovative advances into photography, one of which was the half tone. Its use on high-speed presses revolutionized the printed image. Editors and readers demanded the “real thing,” and photographs quickly replaced drawings and etchings on the printed page.

As those were the Porfirio Díaz years, the demand was for “happy” pictures. Anything else wasn’t good business for the newspapers. 85% of the public was illiterate, and the public that could read – businessmen, large landowners, and the emerging middle class – didn’t want their sleep disturbed.

Casasola worked within those narrow confines along with the others in his field. His early photographs document the comfortable lives of the elite, and he was even there to photograph Porfirio Díaz during the inauguration celebration that led to his last days in office. But he was also there to shoot the crowds cheering on the day of the great dictator’s exile and Madero entering Mexico City in triumph. His subject matter is starting to change, and these photographs will take on enormous power in time.

In 1904 Casasola left El Imparcial to work for El Tiempo, which was owned by Rafael Reyes Spindola, a publisher with vision who saw the great potential of newspapers. He purchased the newest machinery to assure the highest visual quality in the production of his daily paper, and he saw the value of creating more space for photographs.

Casasola also saw the growing potential of photography, and his commitment grew accordingly. In 1905 he started his own photo agency with his younger brother Miguel, called Casasola Fotográficos.

In 1907 he did the unthinkable. General Lisandro Barillas, the former president of Guatemala, was shot. The assassins were to be executed in front of a firing squad in Belen Prison. The coverage of the execution was prohibited. Casasola climbed a telephone pole and made a platform for himself that allowed him to shoot over the prison wall. This incredible feat won him a special award.

With the outbreak of the Mexican revolution in 1910, the photographers of the “good life” now found themselves on the battlefield. This new reality compelled Casasola to look behind the image to the unseen.

He still focused on men of power as he did in the time of Porfirio Díaz, though now the power belonged to men like Pancho Villa and Emiliano Zapata. But he was changing. He was now also focused on the human price of war. He photographed armies attacking railroad trains, rough hewed soldiers replacing the upper class in what was once forbidden territory in the better parts of the conquered capital, soldaderas giving comfort and food and fighting along side their men, and the wasted bodies of the dead strewn haphazardly along the countryside. He photographed groups of armed children, the cold faces of executioners, the last moments of those being executed, and the hardened indifference of the living who had seen too much. He photographed with a clear impartial eye the men doing battle on both sides of the fight.

During this time, he was certainly aware of the work of the French portrait photographer, Nadar, and Eugene Atget who photographed the streets and neighborhoods of Paris. He must have seen the work of Jacob Riis, who photographed the slums of New York. And he surely looked through the American magazine Camera Work. It is evident that their work influenced his perceptions as he expanded the possibilities of his craft.

In 1911, along with other photographers in Mexico Ciity, Casasola formed the Asociacíon de Fotógrafos de Prensa (Mexican Association of Press Photographers), and the next year, he founded Agencia de Informacíon Gráfica (Graphic Information Agency), which was one of the first photo agencies in the world. It included his brother, a great photographer in his own right though many of his pictures were never signed, and all members of his family from children to grandchildren.

It eventually became large enough to embrace other photojournalists, 483 of them to be exact! Here a line blurs. In many cases, it’s hard to distinguish how many of Cassola’s photos were shot with him behind the lens and how many were done by others, including his brother whose own name never appeared on his work.

All aspects of Mexican life were now being captured and frozen in time. Great revolutionary heroes shared a place before the lens with criminals and prostitutes.

It was becoming increasingly evident that Casasola was more than just a recorder of facts. His portraits, particularly of groups, show great skill and outstanding artistry. (It probably helped that he was over 6 feet tall, which certainly gave him a perspective not available to most Mexicans.) His photographs reveal a refined handling of space, gesture and interpersonal relationships, and there is a luminous quality to his portraits.

Between 1920 and 1930 with the years of the revolution behind him, Casasola again looked to his city, this time with the help of the 35 mm camera that saw its debut in 1925. The fantasy world of Porfirio Díaz was long gone and his interest in the rarefied world of political leaders and artistic celebrities was on the wane.

He turned is eye to the common man. Loneliness, alienation, separation from others — the world of those who left their ravaged countryside to find hope in Mexico City was the new reality, and his photographs caught these images in a human and compassionate way. They showed every Mexican worthy of attention. In the process, he saw Mexico’s transformation from ancient tradition to modern times, and he tried to capture that, too.

Casasola felt a great need to preserve this part of Mexico’s past. The photographic archives he assembled with his brother comprise nearly 500,000 images and are considered the finest collection available on Mexican history documenting the first part of the twentieth century. The archives are housed in the Convent of San Francisco in the city of Pachuca in Hidalgo.

Filmmakers and writers have all taken their images of the revolution from the photographs in these archives, and it’s those images of the times that we have internalized. We have seen these images in hundreds of tourist shops all over Mexico and in the gift shops of museums. They’ve been reproduced on t-shirts, post cards and ash trays. Even the Zapatista uprising in the state of Chiapas used his images.

We’ve all seen his work but most of us have never been able to put a name to the images, and in this article it was a treat to correct that oversight and pay homage to this extraordinary man of talent and vision. 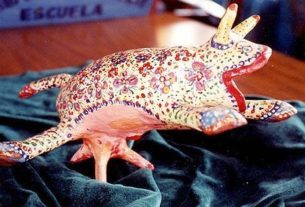 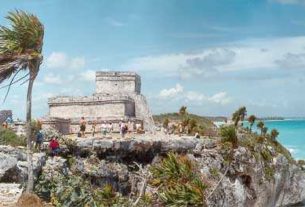 Idle ramblings of a homesick girl