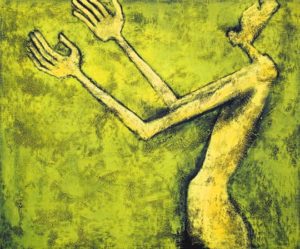 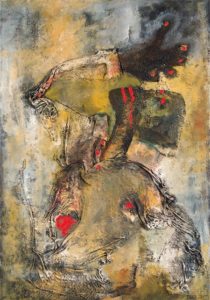 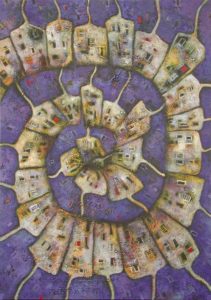 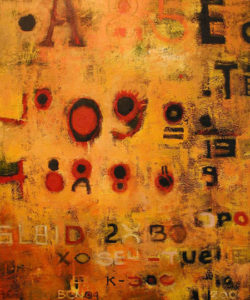 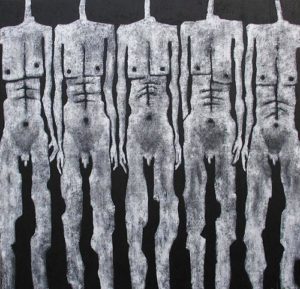 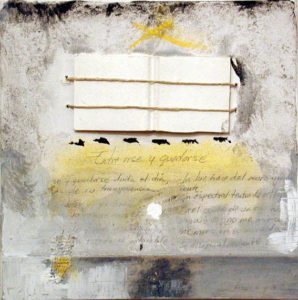 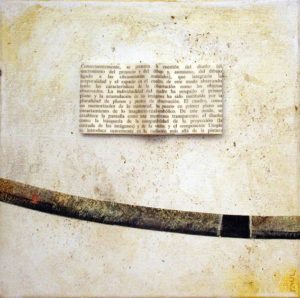 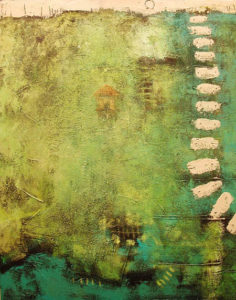 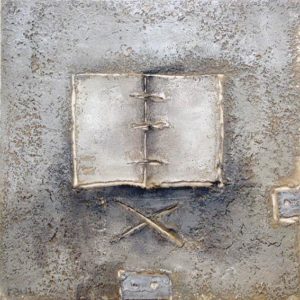 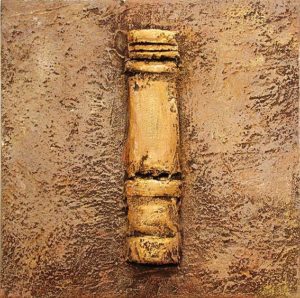 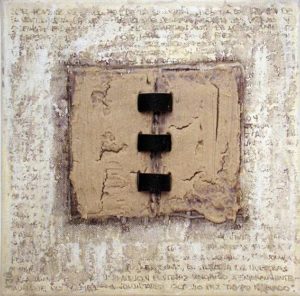 For artist Raúl López García, it is the language of his subconscious that manifests itself in his paintings.

“About two years ago, I realized that I wasn’t inventing anything, but that I was simply transporting my own experiences to a canvas,” says Raúl, who uses just his first name in connection with his artistic endeavors. “I was transcribing it in a language that I know, in a language that I like,” he notes, referring to the language of art.

This artistic language is something that has long been a part of Raúl’s means of expression, long before he realized what painting means to him as a form of communication. He started his artistic education at the age of 16, choosing to study at Academia Bernal in his birthplace of Mexico City. Here, he focused on commercial design and illustration.

“What I learned in those days was something very artisanal,” says Raúl. “I have seen the new generations that make a living at designing… many times, they don’t have a single pencil on their desk. My education was totally different – everything was fortunately still classical training.”

It was during these first years of schooling that Raúl first realized that commercial art restricts an artist’s ability to freely communicate. “I was facing many limitations on what was freedom of expression,” he comments, explaining that the world of publicity is one in which everything is manipulated. “Imagine that you’re about to compose a design (and) you’re thinking about how you’re going to affect people’s subconscious to motivate them to buy a product that you yourself find a little dubious. That creates a conflict in you.”

Raúl believes that this clash between the manipulative world of marketing and his own desire to express himself freely was what pushed him in other directions away from commercial design – directions that eventually led him to painting. Despite his conflict with commercial art, however, it has long been a presence in his life and currently allows him to pursue his fine art projects.

“This whole world that is drawing, design, graphics, publicity or illustration, etc. – it has always accompanied me. However, it’s now in a manner that is more selective,” Raúl says. “In my work, I have fortunately had the opportunity to choose.”

Raúl considers the first half of his career, which was more focused on commercial art, as training for his work as a painter. “Presently, I am 45 years old and I can tell you that during that first phase between 16 and 30 years old, I experienced many things. But they were simply leading me to a path on which I was able to finally start at the age of 30.”

That path is one that Raúl began when he commenced his studies at the Freie Kunstschule Stuttgart art school in Germany in 1991. He has been living in Europe ever since, first in Germany, then France and now Spain. Here, he continues on the same path he started 15 years ago, one in which commercial art has been relegated to a secondary role. It now acts as a means of support that allows Raúl to seriously dedicate himself to fine arts and more specifically, painting.

As Raúl explains, “In all the fine arts, it is an approximation of your person, of coming closer to being able to reveal yourself little by little. I believe that art has liberated me in many aspects. And I have been able to find myself.”

Raúl allows his subconscious to take center stage in his paintings, by allowing the artistic process to flow in an emotional and unplanned manner. “When reason has a force that predominates, each line and each brushstroke is calculated,” he says. “I have discovered that other part, which I allow to live more each time. And that part is the emotional one, which surprises me because I realize that all of those experiences and impressions that I have had… are present (in my artwork). I believe that my subconscious speaks for me and it expresses itself in a very spontaneous manner.”

Thus, the canvas becomes an outlet for Raúl to communicate his most hidden thoughts and long-ago memories. “During the work process, ideas come up from my subconscious in such a spontaneous way that it makes me very happy to know that my life as an artist and my private life go hand in hand.”

And while Raúl’s paintings speak to the artist on a very personal level, their language finds new meaning with each new viewer. Instead of restricting interpretations by explaining what each piece of work signifies for him, Raúl lets his work speak for itself. Thus, the viewer interacts directly with the paintings and deciphers them in his own manner.

“It makes me happy to know that there are many interpretations. Each interpretation that I listen to is like a new song, like a new painting,” Raúl notes, explaining that if he were to define each painting for the viewers than they would be looking at his definition and not the painting itself. He finds joy in the thought that his paintings have the ability to speak of so many more things than he initially saw in them. “I believe that the value is when those million people have a million meanings (for my art).”

These themes of interpretation and communication continue to play an integral role in Raúl’s artwork, as evidenced by two of his latest projects that explore written languages.

According to Raúl, his collection entitled R-Books is dedicated to literature. “I integrated writing, graffiti, poetry and philosophical thoughts… and this helped me a little as a form of inspiration,” he says of the mixed-media pieces that measure 20 x 20 x 4 centimeters each. As Raúl explains, the different thoughts and words that he chose to incorporate into each particular mixed-media piece then became the theme for that work of art.

The pieces are composed of small book sculptures that have been mounted on painted canvases containing words once uttered by the likes of famous writers and philosophers such as Oscar Wilde and Friedrich Nietzsche. Raúl describes his pieces as a fusion between literature and art objects, explaining that they have provided him “new ways to discover in what manner I could bring word to painting.”

Raúl has already completed more than 100 pieces for the R-Books collection, which is an ongoing project for him. “I’m still working on this concept, and I’ll keep working on it as long as the project itself tells me when I have to finish,” he notes. “Ideas, concepts, needs, dreams go away and come back over and over, sometimes as a mixture, or simply refined, filtered, transformed in other impulses. So far I’ve been discovering thousands of possibilities through the R-Books and I’ve been enjoying it quite a lot.”

It is his work on the R-Books collection that gave Raúl the inspiration for his newest project, which is currently in the formative stages. He says that while creating the R-Books pieces, he realized the power that is inherent in the written word. And while reflecting upon this idea, he began to think about how becoming literate means leaving our own personal interpretations of letters behind.

“In our lives, we have been taught to read, but only to read literally,” Raúl says. “What happens to the image? The image starts to become lost.” As Raúl further explains, once we learn to read, we no longer assign our own significance to the letters that comprise each word, but instead associate them with a learned meaning. And in that way, a literate person loses the ability to interpret each letter in his own way. “It is truly a shame that they take away that language from us, that they take away that small freedom which we have,” Raúl laments. “Now, everything is conditioned. You start interpreting things like everyone else.”

With his new project, Raúl wants to give viewers the chance to reach back to those moments when they analyzed visual communications through their own personal lens. He said he wants to give himself and his viewers “the opportunity to read for ourselves.”

It seems that interpretation and communication are common threads interwoven throughout all of Raúl’s work, whether his subject is the written word or architecture (one of his favorite themes) or the human form, like his Eternidad Humana (Human Eternity) project.

Raúl is currently working on the three-part Eternidad Humana collection, with hopes to complete it by the end of 2007. When finished, the collection will be comprised of 36 mixed-media and acrylic paintings measuring two meters by 70 centimeters each. The first phase will feature an archaic representation of humanity, the second phase will examine human history over the past 2000 years, and the third phase will provide viewers a glimpse into humankind’s future as the artist imagines it.

No matter the theme of his artwork, however, it is each viewer’s interpretation that interests Raúl the most. “When (viewers) read my work in a million different ways, I learn from all of those interpretations and readings. The art itself then becomes interactive and it creates a bridge, a thread that connects all of us. In the end, that is the most important thing because communicating with someone means creating that thread.”